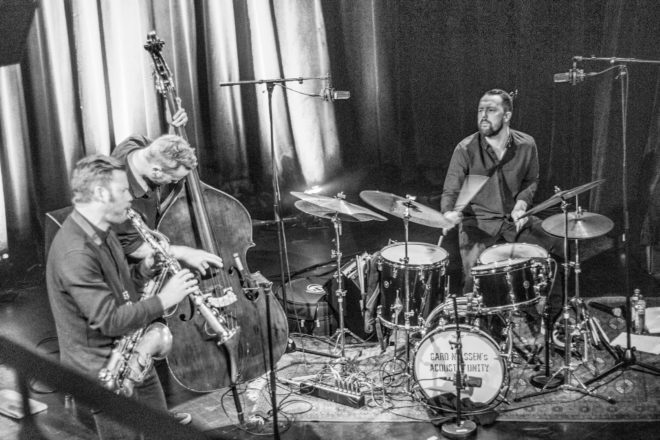 European drummer, composer and producer Gard Nilssen balances his time between five different bands, one of which is making its way to Sturgeon Bay Dec. 14: Gard Nilssen Acoustic Unity.

The project is a jazz trio that’s reflective of its name: fully unplugged, bringing out the organic sounds of each instrument. Nilssen leads the band on drums, while Petter Eldh rules the bass and André Roligheten supplies the saxophone. (Roligheten also plays in a jazz quintet that visited Door County earlier this year called Friends & Neighbors.)

Nilssen became enamored with the idea of an acoustic band after playing in various “really loud” bands, such as Bushman’s Revenge, a heavy metal jazz trio; SpaceMonkey, an “electronica/dance music mash-up” and Amgala Temple, “which draws comparisons with the out-there sounds of Jimi Hendrix, Frank Zappa and electric-era Miles Davis.”

“It just felt about time to do some acoustic music,” Nilssen said.

In all of his projects everything – touring and releasing records – always seems to be happening at the same time, he said, and then there will be periods where nothing’s happening at all. If you’re wondering how he balances his time between it all, he’s wondering the same thing.

When asked how he does it, he said, “that’s the million dollar question,” followed by, “What do you say on Facebook? It’s complicated?”

Nilssen also welcomed a son to the world two months ago, so he’s working through prioritizing which bands he will dedicate more time to in lieu of becoming a parent.

Acoustic Unity is his first priority in comparison to the other projects he said, and is excited to bring it to Door County.

The band released an album earlier this year, To Whom Who Buys A Record. The title alludes to Ornette Coleman’s To Whom Who Keeps A Record. Nilssen named Coleman, along with Albert Ayler, both pioneers of the avant garde jazz scene, as their biggest inspirations.

The record is dedicated to those who buy the record, and just people who are willing to spend money on music. Nilssen finds himself frustrated with today’s streaming services, though he understands the advantage and that they’re here to stay. He doesn’t feel that musicians are getting paid what they’re owed.

“That makes it really hard to release music,” Nilssen said. “If all the wine in the world were free, of course I would have access to that and drink it. But it’s not; someone said it’s not for free. So someone should say the same about music.”

Still he has hope, and was sure to remind me that he’s not a bitter jazz drummer just yet.

In comparison to Acoustic Unity’s Firehouse (2015) and Live in Europe (2017), both internationally acclaimed albums, Nilssen wrote more of the music than ever before on To Whom Who Buys A Record, he said. It follows the same spirit as the other records, but acts as the second studio album since Live in Europe was recorded on tour.

“It’s very nice to try out some of my compositions,” Nilssen said.

It was also recorded 100 percent acoustically in the studio, which is special. It forces them to work with the dynamics when they play.

To someone who doesn’t know jazz, live sessions can be closely aligned with the studio version of a track, or completely different. Gilssen said it depends on the night.

“It’s the most personal thing you can do, I think, to improvise with another musician,” Nilssen said. “You have to give all of yourself and use your ears and just play as well as you can. And trust each other.”

The trio plays without a setlist to keep things exciting on stage, Nilssen said. They go into a show knowing which songs to play, but not when. The musicians have to stay on their toes, listening for the opening notes of a song that one of them might play.

The band is on tour in the United States right now, having played shows in New York, Cleveland and Chicago earlier this week. They’ll head to Portland, OR for a couple shows before heading back to Europe for another slew of performances in the new year.

Nilssen’s favorite part of touring is playing the shows, while most of the other time is spent waiting and travelling. Having multiple concerts in a row is also good for them, he said, because that’s when the music takes its best shape.

Nilssen hopes to record a new record next fall. They also created a 16-piece ensemble called Gard Nilssen’s Supersonic Orchestra out of the music, so that group will go on tour in February. They recorded a live record over the summer and will soon release it.

Until then, Acoustic Unity is looking forward to another Door County trip.

“Every time I’ve been there, there have been fantastic audiences,” Nilssen said, “just really, really into jazz music and interested. They listen a lot, buy records and it’s just fantastic.”

Nilssen would like to make a special shoutout to a talented young drummer who attended one of his past shows in the county. He doesn’t recall their name, but hopes they will show up. He was a “really, really cool guy,” Nilssen said.

Gard Nilssen Acoustic Unity will play at SWY in Sturgeon Bay on Dec. 14 at 8 pm. SWY is located at 231 N 3rd Ave. RSVP to the Facebook event here.