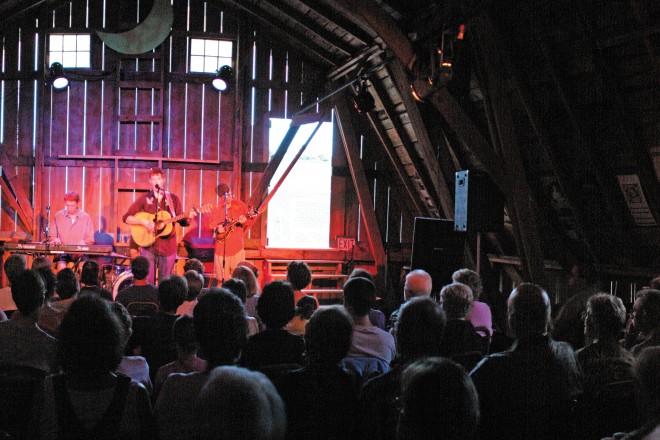 Blue Spruce captivates the audience at Camp David. They will return to the venue on August 8th. Photo by Dan Eggert.

Listen to the music. From folk to classical, from blues to jazz, from ethnic to rock, someone someplace is playing it right now in Door County. Join me on a wander down the peninsula’s sheet music page and discover the heart of this community.

Perhaps the two most recognized theater groups in Door County are the American Folklore Theatre (AFT) and The Peninsula Players. Both are well-loved Door County traditions. The Island Players hold down Washington Island, and the new Isadoora Theatre Company is offering an important dynamic to this scene.

AFT, Door County’s own internationally-recognized theater company, features hilarious original musical comedies, folk concerts, and plays. One of the classics featured in 2004 is Guys On lce, written by AFT co-founder, the late Fred Alley. Music is at the heart of the talented AFT players, and even though Jimmy Kaplan is not there this season, he — like Fred Alley — leaves an indelible mark on the very fabric of the theater. A true strength of AFT is the personal and inspirational nature of the open-air performances. Playwright, performer and AFT co-founder Frederick ‘Doc’ Heide and director/performer Jeffery Herbst are an integral part of the performances, and continue to breathe important creative life into the organization. Over the years the AFT cast, musicians, and writers have included tremendous talent that continues to deliver theater from the heart and the funny bone. AFT resides in Peninsula State Park’s open-air theater outside of Fish Creek.

On the verge of celebrating its 70th year, the Peninsula Players offers musicals as part of their mostly comedic repertoire. The “Theater in a Garden” began “simply with two planks and a passion.” The theater opened with Noel Coward’s Hay Fever on a July summer evening in 1935, and by 1937 settled on a 22-acre site on Peninsula Players Road just west of Juddville. Jim McKenzie took the wheel to steer the theater into the modern era, and in 1962 the Peninsula Players Theatre Foundation, Inc. was formed. The Peninsula Players have performed nearly 500 plays in their dynamic history of comedies, musicals, and mysteries. The 2004 production of the Broadway musical Into The Woods features music by Stephen Sondheim.

Speaking of Sondheim, another performance group, Isadoora Theatre Company (lTC), is bringing back their very successful musical review called Side By Side By Sondheim. ITC, a new addition to the peninsula, was founded by Ben Meyer and Andrew Olson, and integrates all styles of theater and music while drawing on the strength of the community. Craig Little directs the Sondheim show opening August 25th in Fish Creek.

Musicians in Door County seem to get a lot of sun – there are dozens of outdoor venues. However, there are many indoor stages as well to keep the rain off the guitars. Door Off Broadway at Mr. G’s Ballroom (Hwy 57 south of Jacksonport) is currently showing My Way, which features the songs of Frank Sinatra. Piano bars, such as T. Ashwell’s and the Inn At Kristofer’s, are sprinkled across the peninsula, and provide an intimate listening atmosphere. But the bigger show stages include The Door Community Auditorium and Third Avenue Playhouse.

The Door Community Auditorium (DCA) in Fish Creek is one of the largest stages in the area (750 seats). Director Judy Quigley heads up a team of talented technical and support staff. Greats like Keb’ Mo’, Melissa Manchester, T.S. Monk, and many more grace the expansive stage. Those big-ticket performers may dominate the billing, but every winter the DCA features a coffee house series where local and regional talent plays to a more intimate audience. The DCA is also home to the musical The Christmas Schooner, which is fast becoming a November tradition in Door County.

The Third Avenue Playhouse (TAP) residing in downtown Sturgeon Bay is an up-and-coming, non-profit community theater effort (245 seats). Revived from the historic Donna Theater, the modest stage features local and national talent through a blend of musical and theatrical productions, including the likes of the stunningly talented Jennie DeVoe, blues-harmonica master Corky Siegel, and local favorites like Washington Island folk singer Julian Hagen. It is here you can listen to the mellow, soul-connecting new age music of internationally known RASA — Hans Christian and Kim Waters. TAP is an intimate stage on which local talent can perform original material for an appreciative crowd.

Music magic is particularly alive at several unique places on the peninsula. The first is Birch Creek Music Performance Center, on County E just east of Egg Harbor. The magic at Birch Creek happens when young music students learn to interact with an international and talented faculty. This is a summer school unique to the area, offering the community the chance to witness the process of music creation. With ice cream and apple pie in hand, the audience becomes immersed in symphonic evenings with Ricardo Castaneda, enveloped by the emotions of jazz sessions with Jeff Campbell, and overwhelmed by that can’t-stop-movin’ feeling as percussion groups and steel band players take the stage with Robert Chappell. And that’s just scratching the surface; the students are pretty good, too. Co-founder Jim Dutton had a vision to bring music to the young and let them create it. At Birch Creek, it is a reality.

Magic also happens when Victor Yampolsky makes his annual pilgrimage to Door County. The conductor leads the Peninsula Music Festival (PMF) with uplifting symphonies from August 3rd to the 21st. Starting from just a few dedicated musicians who summered here, the PMF has grown into a nationally-recognized destination. This is the only fully professional symphony orchestra in northeast Wisconsin. Performing nine concerts in three weeks, this year’s program features the Sibelius Symphonies 1, 2 and 3 – all held in the Door Community Auditorium in Fish Creek.

Summer would not be complete without the magic of Midsummer’s Music Festival (MMF). This chamber ensemble performs from June to September. Artistic director James Berkenstock presents a series of selections from Bach, Dvorak, Blank Turina and Stenhammer. What is unique about the MMF is the chamber atmosphere in a wide variety of locations from Ellison Bay to Sturgeon Bay.

There are places throughout the peninsula for the Door’s many unsung musicians. Music can be heard at all the festivals. For example, Washington Island’s annual folk festival, organized by John Yancy, showcases the amazing amount of island talent and draws upon the regional folk community. Between the island and the peninsula sails the Sunset Concert Cruise out of Gills Rock. It’s the place for jazz over dinner on the water at sunset. Gerhard Bernhard will even play his ocarina if you ask him.

Back on the peninsula one can enjoy the open mic stages. One favorite is at the Town Hall Bakery on Highway 57 in Jacksonport, where local talent mingles with invited artists like national acts Meridian Green and AI Rose. This is a non-pub setting for discriminating listeners who can also delve into baked goods while enjoying quality home-made music.

Not all the music in Door County is in the theaters. There is music seeping from the walls of many of the nightlife establishments that give visitors and residents alike a place to gather and dance and meet friends. It is a music scene often stumbled upon, or discovered through word of mouth, or from a hand-drawn poster in a coffee shop. There are many players, many regulars, and many up-and-coming performers.

It is in these nightlife scenes where the rockin’ local bands play until closing time. Perhaps the longest standing area band is Big Mouth, fronted by singer/songwriter and lead guitarist Jay Whitney, and backed by a seasoned group of talented musicians. They’ve been rocking the peninsula for over a decade, sometimes four nights a week all summer. That kind of schedule is testament to the eagerness of music-hungry crowds on the peninsula. The amazing Mullet Hunters featuring Sean Murphy and gang — Kit, Freddy, Chris and Jeremy – is the rock-steady band on the peninsula these days. But bands often morph, and musicians make new groups – like Whitney’s spin off Big Daddy and the Soul Injectors, and local folk legends from Bubble and Squeak and their spin off Hobson’s Choice. The new acoustic country pop band 8-Spokes is making the scene and includes a musician or two from Little Marsh Overflow band. This keeps the players playing, the strings humming and the lyrics flowing like a good Wisconsin beer. The nightlife energy keeps traditions alive and gives young musicians a foundation from which they can launch themselves.

Look a little deeper and one will find Door County’s hidden treasures. Grammy-nominated Pat MacDonald, formerly of Timbuk3, tops this list as a dark soul-moving lyricist. He can sometimes be heard at the Bayside, the Northern Grill or the Red Room (where he recorded his latest live album). Bluegrass legend Bill Jorgenson is another treasure. Jorgenson was named the Father of Wisconsin Bluegrass by legend Bill Monroe, and is a regular at Wavepoint Marina’s bluegrass evenings.

Other hidden treasures can be found at Camp David, a farm just east of Fish Creek. It is a refuge for the die-hard players, those with a message, those with the stamina to jam all night, those with the blues and those that rock. This fabulous best-kept secret offers ten summer concerts of local and international musicians. Names like Claudia Russell, Mark Raddatz, and Eric Lewis all headline at Camp David.

Now take an even deeper step into the peninsula’s late night music scene. That’s where you’ll find local music guru Sam Lozoff. He keeps tabs on the underground scene and reports that it’s been a very good summer for music. He manages the open mic sessions at Husby’s, and is pleased with the diverse talent and strong all-night-long supporter turnout. Sometimes, after the theater shows, you’ll even find the same theater musicians jamming with friends at Husby’s, the Bayside, or the Nautical. It’s a chance to get an extended down-home concert in a music community where the main motivation is to play and enjoy music.

The impressive body of musical creativity in Door County does not stand-alone. This is a supportive community with many people, businesses and organizations, like the Peninsula Arts Association (PAA), the Wisconsin Arts Board (WAB), and the Heartland Arts Fund, donating time and funding to give performers a stage. The PAA has distributed over $400,000 to hundreds of projects since 1994 supporting all the theaters and festivals and many venues at one time or another, and the WAB has matched funds with private donations.

The music is always resonating through the county; you just have to listen. The Door Peninsula is a veritable gold mine of talent, and the summer tourist season fuels it to national-quality levels. Sit back and enjoy, but don’ t forget to listen to the locals –that’s where the gems can be found.