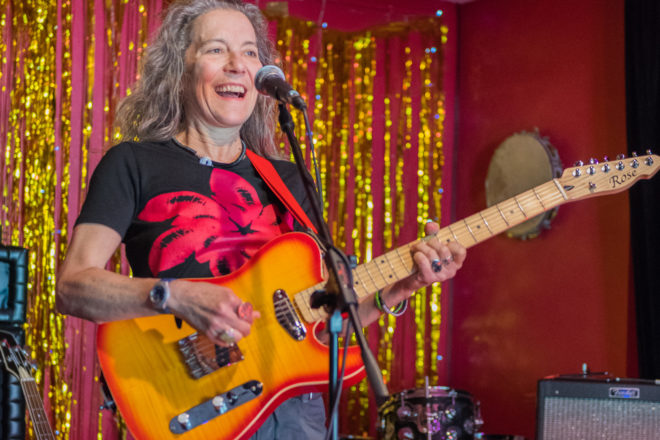 Musician Cathy Grier at the Tambourine Lounge in Sturgeon Bay, where she now serves as host for the weekly WRiTERS NiGHT. Photo by Len Villano.

The Holiday Music Motel’s weekly WRiTERS NiGHT for musicians, poets, storytellers and artists has found its newest host with the arrival of Cathy Grier, an East Coast singer-songwriter whose four decades-long career has taken her from Connecticut biker bars to Paris, France and finally to the motel’s Tambourine Lounge.

No stranger to the musical underground, Grier comes to Door County from her native New York, where for the past 16 years she has performed in the Big Apple’s literal underground – the subway system. Most recognizable as the NYC Subway Girl, Grier has built a reputation as a socially conscious performer who has captivated audiences across the world with a clear, powerful voice steeped in the “soul, grit and emotion” of blues.

Her musical influences are a product of her ‘60s upbringing, when she was encouraged at a young age to write songs mimicking folk legends Bob Dylan and Joan Baez. Grier credits these artists and the social happenings of the time – particularly the Civil Rights Movement and the environmental disasters that led to the creation of Earth Day – for inspiring her to pursue music as a profession.

“Something about the combination of music making a difference in raising awareness and helping make change and also the feel-good aspect,” Grier said. “Think about it. Joni Mitchell wrote a song called ‘Big Yellow Taxi’ and ‘Don’t it always seem to go that you don’t know what you’ve got till it’s gone,’ it’s kind of like I learned from that lesson as a young artist that you could write about a love interest, about a breakup and about the environment. What was in me that made me want to be a professional musician was the passion to do what I love to do and a cultural environment that was urging me to do that, that was very easy to get gigs, that was very easy for people to say sure, come on stage and perform, and an audience that was willing to accept that.”

Grier has found audiences everywhere she has been since the age of 17, when she first began performing. They have heard her in every genre that has come through the radio since then, and in just about every setting. Chief among them has been the subway system of New York City, which Grier got involved with in 1999 through the Metropolitan Transportation Authority of New York City’s Music Under New York program, which offers musicians space at 30 locations throughout the city’s transit system.

In 2008, she adopted the moniker “NYC Subway Girl” – a personal homage to the girl within us all because as Grier explains, “there’s nothing more powerful and beautiful than a young girl who thinks anything is possible.” Grier used her position as the NYC Subway Girl to set up a website that, along with promoting her own performances, became a resource for fellow subway buskers to learn what their rights are. She also started “The Inspiration Project.”

“I started filming people and then I made short video clips that went on YouTube and it was called The Inspiration Project where people would just stop and ask me how things were going and then I’d say hey, can I ask you a question? Then I’d film them and ask what inspires you,” Grier said. “It’s really remarkable the stories that you get from asking a simple question.”

A collection of clips from the project are on Grier’s website, NYCSubwayGirl.com.

By 2014, Grier was ready for a change. She left New York City for a six-month, 18,000-mile road trip (which she affectionately calls her Wander Tour) that brought her to Madison, Wisconsin where she met and performed with bassist and loyal Steel Bridge Songfest performer Tony Menzer. Menzer encouraged her to apply for the 2016 festival and after returning from her road trip, Grier did just that.

From there, her 2016 was a whirlwind of activities – she packed up two decades of life in New York City, bought a house in Sturgeon Bay, and has filled her schedule with performances in Door County and beyond. In March, she took over as host of the Holiday Music Motel’s weekly WRiTERS NiGHT – an all-ages open mic for musicians, poets, storytellers and comedians.

melaniejane, who manages the Holiday Music Motel and extended the invitation for Grier to attend last year’s Steel Bridge Songfest, said Grier is a natural fit for the gig.

“She’s very supportive and generous to all of the musicians and very encouraging of people who need more experience,” melaniejane said. “It was a serendipitous meeting and then for her to move here and embed herself and invest herself in the community is really cool.”

Although this is Grier’s first time ever hosting an open mic night, the opportunity to interact with other musicians – combined with her experience living and playing music in Door County – draws many parallels to the life she led in New York City, particularly her life underground.

“It is above ground but it’s sort of performing in a public space where there’s nothing expected of you financially. You don’t have to come in and pay, the artists aren’t paid, you aren’t paying for drinks so there’s no part of that,” Grier said. “…It’s a safe place for creatives to come and share their art, to express or not how they got there, how they experienced it, to provide a really interesting insider’s view to anybody who just wants to participate by being in the audience, to see what it’s like to see something that’s either old and being revisioned or new and being just developed.”