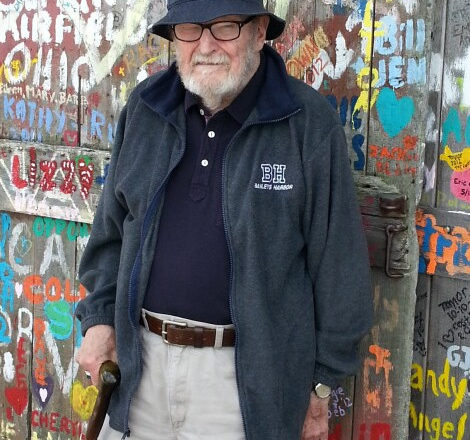 He was born August 13, 1925, in Milwaukee, the only son of the late Alvin and Alice (King) Mengert. Following high school, Carl graduated in 1950 from Milwaukee State Teachers College, pursuing his art degree before receiving his master’s in library science at UW-Madison. He served our country in the U.S. Army during WWII. In 1948, he married Lorraine Neuens in Milwaukee. She preceded him in death January 6, 2017.

Described as unfailingly cheerful, Carl was suited for his calling of education as he taught art in Edgerton, WI, serving as their Junior High School Librarian, then at UW-Whitewater before returning to the position of Librarian for Edgerton High School until his retirement. He and his wife, Lorraine, retired to Sturgeon Bay in 1985, where his family had summered since 1971.

After studying art with Bridget Austin, Lionel Wathall, and James Range, he was encouraged to devote serious time to watercolors, even studying with Ratindra Das. Carl was represented by the Blue Dolphin House & BDH Studio in Ephraim, Stonehill Crafts in Ephraim, and was an active member of the Door County Art League. He had exhibited at Milwaukee Art Institute, Hardy Gallery, Miller Art Museum, Peninsula Music Festival, DC Art League, and DC Memorial Hospital. His work had appeared with NML Insurance Co. Milwaukee, Wausau Hospital Center, Miller Art Museum, and many private art collections throughout the US.

Lorraine and Carl also had an extensive eclectic art collection, surrounding themselves with the works of others, because to Carl “it’s an awareness of what’s around you and making life exciting to look at”. To Carl and Lorraine, collecting was a way to say “thank you” to the wonderful and interesting kind and gentle people who created such beautiful things. To Carl, works are collected for love, not investment.

Funeral services will be held on Friday, June 3, 2022 at 11:00 a.m. at Bay View Lutheran Church with Rev. Jeff Greathouse officiating. Military honors will conclude the funeral service and a luncheon will follow.

The family wishes to extend a heartfelt thank you to the staff at Cardinal Ridge Assisted Living (past and present), Unity Hospice, and Shannon Lauder for all their love and compassion.