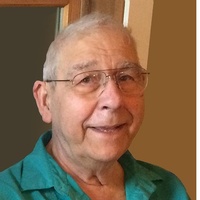 Don A. Johnson, 87, passed away on June 20, 2018 at Scandia Village in Sister Bay, Wisconsin. Don was laid to rest alongside his wife Marie on June 23, 2018 at the Little Sister Cemetery with the immediate family in attendance.

While Don was born in Chicago, Illinois, his family had deep roots in Door County and as a child he often visited the area and the relatives that remained. He continued as an adult until 1991 when Don and his wife Marie moved to Sister Bay and built a home on Trillium Lane. The friendships made in his 27 years in Sister Bay were some of the deepest and dearest to him.

Don was married to the love of his life, Marie Maplesden on October 27, 1951.   They were married for over 49 years until her death in 2001. Together they raised four children with a deep and constant love – Martin, Nancy, Michael and Jack – all who were in Sister Bay to mark his passing. They were joined by four of Don’s five grandchildren – Melissa, Lars, Brigitta, and Chris; one of his six great grandchildren, Anders; Marty’s wife Anna and Lars’ wife Ashley; and some close friends.

Don and Marie built a home on Pine Road in Homewood, Illinois where he started as a volunteer firefighter while working in sales at Republic Steel. He became a full-time firefighter and advanced to Assistant Chief and Fire Prevention Officer for Homewood Fire Department. He was integral to the development of Homewood’s professional fire department and the updating and enforcement of the village’s building codes. Known for his professionalism and knowledge, he put a great focus on the prevention of fires beginning with the education of school children and the creation of civic activities centered around the annual Fire Prevention Week.

For most of his life, Don enjoyed travel and often spent months in the preparation and execution of the yearly vacation. He never lost the curiosity that drove that interest. It was a passion he passed on to his children. He also loved wood carving, cheering on the Green Bay Packers and attending any event that involved family and friends. In memory of his wife, he was also actively involved in the Alzheimer Association annual walk and the related fundraising element.

People often talk about Don’s ability to connect with people, his outgoingness, and his warm affability. Don could talk to anyone, anywhere, and he often did. He made you feel acknowledged, validated, and recognized. He would also tell jokes, often really bad jokes, that just endeared himself to others even more and added to his circle of friends.

Don had a deep and abiding faith and was committed to learning, sharing, and living the Word of God in his daily life. It was something he shared with those around him. He was always an active member of a church throughout his life, including Salem Lutheran Church in Homewood, Illinois and Shepherd of the Bay Lutheran Church in Ellison Bay. He was most recently a member of Immanuel Lutheran Church in Bailey’s Harbor.

Memorial donations may be given in Don’s name to Immanuel Lutheran Church, the Alzheimer’s Association and the Good Samaritan Society – Scandia Village. The family wishes to thank the entire staff of the Good Samaritan Society – Scandia Village for their care of Don in his final days and previously, the care of Marie who battled Alzheimer’s for many years.

Don will be thought of often and will be missed.