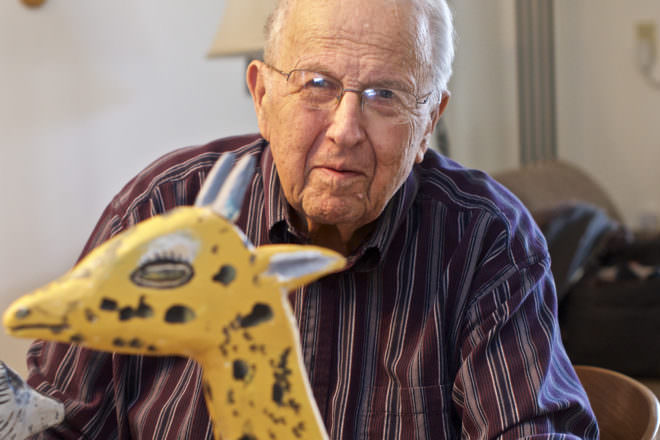 Don was the oldest son of William J. and Nione (Christensen) Brink, born in Oshkosh, Wisconsin on October 9, 1925. A day before his 18th birthday, Don enlisted in the U.S. Navy and served as a hospital corpsman aboard the USS Ticonderoga near Pearl Harbor and then on Johnson Island. Upon his return, he enrolled at Oshkosh State Teachers College as a music major, and it wasn’t long before he noticed the alto who always came late to a cappella choir (he later learned she was coming from student teaching nearby). He and Loraine Schmidt married December 27, 1948, in Hollandtown. Don’s studies continued at University of Wisconsin-Madison. He started his career as a manager for the Kroger Company, first in Madison then Evansville. With two toddlers in tow, he and Loraine moved to Racine in 1952 when Don began selling life insurance for Northwestern Mutual (NML). The family expanded to seven children, and in the meantime Don became the NML District Agent in Racine.

Upon retirement in 1986, Don and Loraine moved to Ephraim, where they thoroughly enjoyed the arts. Don was known for his photography, woodworking, and carving, and despite declining vision, he continued to paint wood sculptures until recently.

Don got involved in music at an early age, playing the trombone at Merrill Junior High and singing in the Trinity Episcopal Church choir in Oshkosh. He directed the Racine Dairy Statesmen Barbershop Chorus beginning in the mid 1960s, which twice earned its way to international competition under his directorship. He fostered that love of music in his children and grandchildren.

Don served various organizations through the years, such as president of the St. John Nepomuk Parish Council and the Elks Youth Band Parents Association in Racine and as member of the Ephraim Town Board and fundraising coordinator for Habitat for Humanity in Door County. He was a member of Stella Maris Parish, St. Rosalia’s Church in Sister Bay.

Don loved his family and family gatherings, and he always was interested in what his children and grandchildren were studying. He and Loraine loved traveling.

He was preceded in death by his parents, sister Judy Day, and daughter Jane E. Kuhnwald.

A celebration of his life will be held at Stella Maris Parish – Sister Bay site, 2410 S Bay Shore Dr (Highway 42), Sister Bay on Feb. 4, 2017 with visitation beginning at 9 am and Memorial Mass at 10:30 am. Join the family for a luncheon at the church following Mass. Internment will be at St. Rosalia Cemetery in Sister Bay in the Spring.