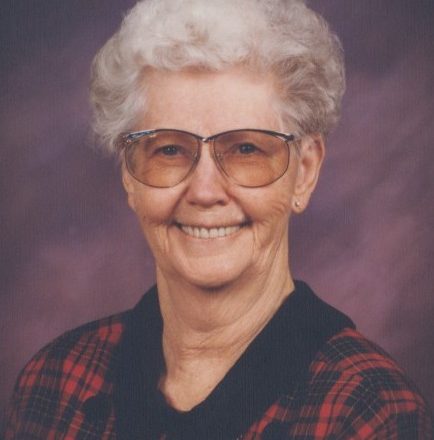 She was born June 13, 1922 in Velva, ND, the daughter of Harry and Selma Amanda (Olson) Sigman. Erma was baptized at Bethlehem Lutheran Church; from baptism to death, Erma’s life always reflected her faithfulness to Jesus Christ. Erma was a graduate of Bowbells High School class of 1940. She married Arthur “Art” Olai Hovde in Williston, ND on August 13, 1941. Erma’s first priority was her family, she and her sisters took special care of her widowed mother and young sister, while also working outside the home waitressing or being a cashier, doing whatever she could to care for her family during these especially challenging economic times. In 1957, she and Art moved to Browerville, MN and operated a family-owned dairy farm for over four years. Erma, still working outside the home and now farming, while raising two children, proved she was not afraid of hard work. They shared 21 years of marriage.

Erma went work for Larson Boat Works in Little Falls, MN and met Edward James Dvorak. As they got to know each other, Ed became the love of Erma’s life. They were united in marriage in 1963. Their life was filled with spontaneous fun – dancing and going for car rides, both usually following Ed’s “lead.” Erma and Ed grew beautiful vegetable gardens and canned most everything the garden produced. Their gift for growing things also included prolific flower beds surrounding their lovely home. They enjoyed hunting, fishing, and raising dogs, usually white Shepherds or Pomeranian breeds. This marriage also gave Erma the good fortune of two step-daughters, Jan and Betty and eventually their families, whom she admired and loved greatly. Erma and Ed were blessed 27 years of marriage and resided together in the (Minnesota) communities of Brainerd, Motley, and Staples. Ed passed away in 1990.

Erma met Clarence Joseph Veith at a local dancing event in 1996 and they married November 1, of the same year. If they were not at a local baseball game rooting on family and friends, they were dancing to the music of their favorite polka band the “Night Owls”. This couple was blessed to be always surrounded by family and friends, and shared nearly 15 years of marriage, while residing in Staples. Clarence preceded Erma in death on January 30, 2011.

In 2011, Erma moved to Sturgeon Bay, WI where her son, Wesley “Wes” was living. Her ability to make friends wherever she went continued as she lived at Bay Hill and Pine Crest Village and deeply valued the friendships she made in these communities. In September 2018, when she wasn’t able to live on her own, Erma moved into the Skilled Nursing Facility at Door County Medical Center and eventually moved into the new Skilled Nursing and Hospice Care Center.

Erma was known for her beautiful needlework and embroidery and usually made 50 dish towels at time. She was also a wonderful quilter. Erma was an avid card player and a “wicked” one at that who “showed no mercy” to whoever she was playing with, especially if you were family. Erma will be remembered for being light-hearted and witty. She lived through some incredible times, some difficult and other’s exiting, modern innovations.

Arrangements are pending for Erma’s life to be honored with a memorial service held at Huehns Funeral Home in Sturgeon Bay. The visitation and memorial service schedule will be announced in the near future.

She will be laid to rest in Evergreen Hill Cemetery in Staples, MN, beside her husband, Edward Dvorak.

Erma’s family felt they could not possibly thank enough the incredible staff at the Skilled Nursing Facility, Dr. Richard Hogan, DCMC Spiritual Care, Chaplain John Hauser, Chaplain John Viste, and Sr. Monica Bongert, for the respect and loving care provided to Erma over the years, but they know someone who can: “May the LORD bless you and keep you; may the LORD make his face shine on you and be gracious to you; may the LORD turn his face toward you and give you peace.”

Expressions of sympathy, memories, and photos of Erma may be shared with her family through her tribute page at www.huehnsfuneralhome.com.