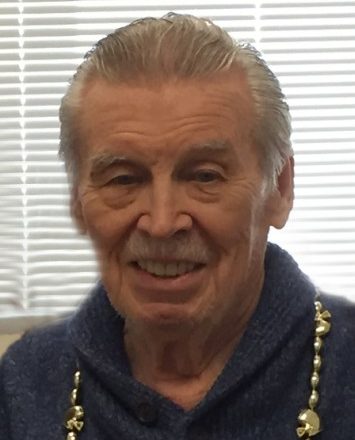 Fritz was born on May 2, 1926, in Sturgeon Bay to Francis L. and Gertrude (Simon) Van Duyse, and from his earliest days was involved with his driving loves, sports and publishing; at the tender age of eight, organizing and leading the local Boys Athletic Club and printing a weekly sports paper on a toy press. At 12, he was already contributing sports articles to the Door County Advocate. At 14, as editor Sumner Harris took him under his journalistic wing, he was covering all of the very same high school sports in which he played.

He lettered in all three major sports at Sturgeon Bay high school, where he graduated in 1944. Only 17, he then immediately enlisted in the United States Navy, and just three months later was on a troop ship, headed for the jungles of the Southwest Pacific, where he served with distinction in combat zones in New Guinea and the Philippines, including the famous Battle of Leyte. He served with advanced communications for the Seventh Fleet and earned a battle star and several campaign ribbons. He later became a member of the American Legion and the Veterans of Foreign Wars.

After the war, he returned home to Institute, where his parents had purchased the bar and ballroom, and it wasn’t long before his dad had not one, but two baseball teams in the Door County League, one managed by Fritz, and the other by brother Bob. Fritz went on to serve as secretary-treasurer of the DCL and also covered the games for the Advocate, in addition to starring on the field and piloting his Institute Cubs to playoff championships in 1948 and 1949. His most memorable game came in the 1948 title game against the venerable Lefty Johnson and Washington Island. That was the day Fritz singled to help tie up the game in the ninth, and then leading off the eleventh, he scorched a drive to center that got through the centerfielder’s legs and rolled all the way to the wall as Fritz circled the bases with the winning run. He was carried off the field by Uncles Al and Hub Simon as the crowd went wild at Sturgeon Bay’s old Sunset Field.

In 1951, after Fritz’s folks had sold the tavern and ballroom, he was chosen to manage the Sturgeon Bay Athletics in the strong Northern State League. He also played some, including in one particular game, his only lifetime stab at pitching, when he came in for relief duty in the ninth inning. Surprisingly, he got all three batters to sky to the outfield. For much of the season he imported an outstanding battery from Milwaukee, but when the team’s board of directors decided to go with local talent because of financial restraints, Fritz resigned from the team and went into broadcasting.

While serving as office manager of his dad’s beer distributorship, Fritz broke into radio part-time doing sports shows and play-by-play for WDOR in Sturgeon Bay. But when the late Ed Allen opened another station at Manitowoc, WWOC (now WCUB), he appointed Fritz as one of his very first announcers full time. Thus was launched a colorful career in broadcasting for the man who came to be known as “Fritz Van”.

After going across town to WOMT in order to be able to air the Manitowoc Chiefs football games, Fritz moved up to WEBC at Duluth, but by this time, minor league baseball was after him to migrate south, which he did, first at WALB and WALB-TV for the Albany Cardinals, and then in succeeding years at Waycross for the Bears, a Braves farm team, and eventually at Valdosta for the Tigers franchise. Later he moved on to Cordele where he had the distinction of broadcasting the first annual Watermelon Bowl football game.

But Fritz’s boyhood love of the Green Bay Packers influenced a 1956 decision to return to Wisconsin, where he spent the balance of his career except for brief stints in Michigan at Cadillac’s WWTV and Saginaw’s WSGW. In Wisconsin, he then free-lanced for numerous stations including both Appleton stations and WNAM, Neenah, before former Packers player Ben Starret brought him to Green Bay to edit his ProBall football magazine. And, while there, Fritz also hooked up as sports man for WDUZ radio.

Most noteworthy of his early days at Green Bay in the late fifties was Fritz’s leadership of the drive to return Curly Lambeau as coach of the Packers. An unofficial poll by a Green Bay retailer showed the city wanted Lambeau back by a 7 to 1 margin, but the Packer board would have none of it and named Vince Lombardi to the helm. Ironically, Fritz and Vince hit it off splendidly on their very first meeting at the training camp headquarters of St. Norbert College in 1958, with Fritz showing the famed coach how to operate a new tape machine he had been given. Fritz was at WDUZ at the time but shortly thereafter was named sports director for WLUK television. Later on, Fritz would pride himself as being “the friend of Packer coaches,” having been very close to Lambeau, as well as being on a first-name basis with the likes of Lombardi, Bart Starr, Forrest Gregg and Ray Rhodes.

Gradually, Fritz transformed from broadcaster to publisher. His travel guides and football publications became legendary back in the 60’s and 70’s. Fritz’s “Packer History” today is regarded as a classic, and his “Salute to the Packers” yearbooks are pricey collector’s items. Fritz was recognized for his broadcasting and publishing achievements in the 2001 Who’s Who in the World. He continued publishing into the 2000’s with offerings such as his popular “Pro” sports magazine.

Fritz attended Eau Claire State back in the 40’s when Coach Cliff Fagan invited him and six other Door County athletes to play football at the college. Fritz was a backup at wide receiver in his freshman year there, and also served as sports editor of the college newspaper. He later transferred to the then Spencerian business college in Milwaukee, where he was a starter on the basketball team and later graduated with a bachelor’s degree in business administration.

Given current health considerations and gathering limitations due to the COVID-19 pandemic, a private Mass of Christian Burial will be held at St. Joseph Catholic Church in Sturgeon Bay with Fr. Robert Stegmann as celebrant. Fritz will be laid to rest in St. Joseph Cemetery next to Dorothy.

A memorial celebration of Fritz’s life with military honors will be held later in the year when circumstances permit.

“Our family would like to express our heartfelt gratitude to the amazing staff at the Pete and Jelaine Horton Skilled Nursing and Hospice Care Center at Door County Medical Center for their loving care.”

Huehns Funeral Home in Sturgeon Bay is assisting the Van Duyse family. Expressions of sympathy, memories, and photos of Francis may be shared with his family through his tribute page at www.huehnsfuneralhome.com.