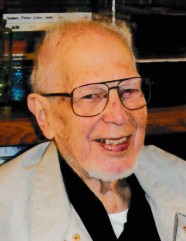 Leo Peter Sauer was born in Kenosha, Wisconsin, to Leo G. and Beata A. (née Pankow) Sauer. He was reborn into the Kingdom of God through holy baptism on June 2, 1929. He confirmed his faith in the True and Living TRIUNE GOD at Bethany Evangelical Lutheran Church in Kenosha, Wisconsin, in June, 1943. His soul went to be with his SAVIOR JESUS CHRIST, where he awaits the day of resurrection.

Leo Peter was a 1947 graduate of Mary D. Bradford High School in Kenosha, Wisconsin. He studied for a year in Watertown, Wisconsin, at Northwestern (Seminary) Prep. College and continued his education at the University of Chicago in Illinois. He graduated in 1971 with an honorary bachelor of arts degree in mechanical engineering and a master’s degree (MBA).

His work experience began in 1945 at the family business, the Dairy Service Equipment Company, where he served as bookkeeper and mechanical engineer. He went on to be employed at Signode Steel Strapping Company for 35 years, which included the merger with Illinois Tool Works. His final and favorite position was as managing project engineer. It led him into research projects around the United States and overseas.

Peter married Elaine Helen Kersten on January 28, 1951. Elaine and two children, Bradley and Timothy, preceded him to Heaven. He was also preceded in death by his brother, Pastor Joel Ph. Sauer and his sister, Marcie A. Hagen.

He is survived by two daughters, Barbara (and Edward III) Ubert and Jennifer Sauer; son Michael (and Donna) Sauer; his sister, Mary (and Richard) Hannenberg; as well as grandchildren; great grandchildren, and nephews, nieces, and their children.

A funeral service will be held at 1 pm on Saturday, Sept. 14, at Christ Evangelical Lutheran Church in Baileys Harbor, with Pastor Peter Lindemann officiating. Burial will be in Little Sister Cemetery.

Casperson Funeral Home in Sister Bay is assisting the Sauer family with arrangements. Expressions of sympathy, memories and photos can be shared through his tribute page at caspersonfuneralhome.com.