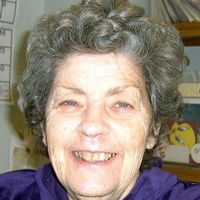 Margaret Lorraine (nee Anthony) Hollenbeck died March 10, 2018. She was born in Waukegan, Ill. on Feb. 4, 1933 to Clarence and Lucille Anthony. Margaret was the only girl in a family of seven brothers. In Feb. of 1952 she married a sailor named Kenneth Hollenbeck from New York State. They returned to Waukegan in 1956 where they lived until moving full time to Sister Bay in the fall of 1997.

Margaret loved music and had a lovely alto voice, singing in the church choir and in many trios. She passed her love of music on to her two daughters  Sheryl Joy (John) DeRossi of Atchison, Kansas, and Patti Jo (Ronald) Seegers of Neenah, Wis.

Margaret liked to crochet, making many ripple afghans for family and friends. She also loved to fish and often caught the first, the biggest and the most so we finally wouldn’t bait her hook until all the rest of us had our poles in the water.

She was preceded in death by her parents, brothers Rudolph, William, Donald and Raymond, and son-in-law Ronald Seegers as well as numerous aunts, uncles and cousins.

A special thanks to the kind and loving staff at Good Samaritan Scandia Village in Sister Bay for the wonderful care they gave to Margaret over the past two years. Thank you also to the kind and compassionate personnel from Unity Hospice who helped so much during Margaret’s final days.  In lieu of flowers, memorial gifts may be given to the Birchwood Memory Care Unit at the Good Samaritan Society in Sister Bay.

A celebration of her life will be held at First Baptist Church in Sister Bay on Friday, March 16, 2018 at 11 am with a visitation from 10 am until time of service. There will be a luncheon to follow at the church. Interment will be at Little Sister Cemetery in Sister Bay.