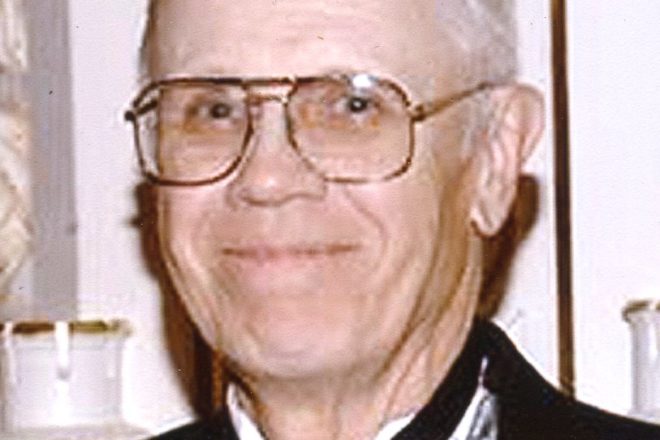 Paul Joseph Lambeck, 86, of Nasewaupee, died at home on Sept. 28, 2022.  He was born January 28, 1936, in Milwaukee to Thomas and Elizabeth (Tremain) Lambeck.  He graduated from Oshkosh High School in 1954 and UW-Madison in 1958.  While in high school, he worked as a soda jerk at Sunlight Dairy.  During college summers, he worked for Gabe’s Construction Company laying gas main for Wisconsin Public Service Corporation.  He was a member of the UW fencing team that won the Big Ten fencing title in 1957 under Coach Archie Simonson.  He worked in various cartographic positions for the Aeronautical Chart & Information Center, renamed the Defense Mapping Agency Aerospace Center, in St. Louis, Missouri for 35 years.

On August 27, 1967, he married Ruth Ann Quirin Brown, a widow with three sons: Dennis, David, and Michael.  They had two children: Steven and Karen, and lived in Columbia, Illinois.  Ruth Ann died in an automobile accident on March 23, 1988.  Paul renewed his friendship with former Oshkosh High School classmate Geraldine Mueller at their 40th Class reunion in 1994.  They moved to Nasewaupee in southern Door County in 1996, where they enjoyed the company of many cats and lots of wildlife.

Paul once said that his purpose in this life must be to take care of women, including wife Ruth Ann, mother Elizabeth, sister Lucy, special friend Geraldine, and daughter Karen.  It was a job at which he excelled.

Paul loved to tend his garden and “feed the critters”, which included starting and maintaining trails through the woods surrounding his home, complete with feeding stations to be supplied every morning with corn and sunflower seeds.  Deer would sometimes be waiting patiently for his arrival, although he was never lucky enough to have one eat from his hand, and oftentimes a cat would accompany him on his rounds.  Friends would joke about seeing Paul in the garden with a bird perched on his shoulder and rabbits, squirrels, and deer gathered around to hear his stories and admire his giant sunflowers and tiny ears of corn. Paul enjoyed baking, making enough Christmas cookies that he could share with Karen’s co-workers and still have leftovers in March. He also enjoyed following the Green Bay Packers.

Per his wishes, his remains will be cremated and there will be no visitation.  Forbes Funeral Home is assisting the family with arrangements.