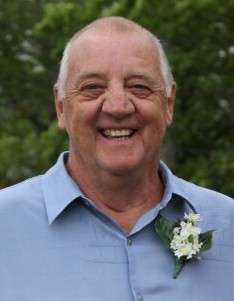 William Joseph Smith, “Bill” to everyone who knew him, 78, of the Town of Gibraltar, died early Sunday morning, October 17, 2021 while at Froedert Menomonee Falls Hospital.

He was born June 22, 1943 in Sturgeon Bay, the son of Walter Alfred Smith and Dolores Margaret (Fischer) Smith. Bill grew up attending Liberty School in the Town of Liberty Grove and St. Rosalia Parish (now Stella Maris Parish-Sister Bay site). He graduated from Gibraltar High School with the class of 1961 and enlisted to serve his country with the United States Navy in 1962. Bill served actively until 1966 and remained with the Naval Reserves for two years.

Through his sister, Kathy, he met Judith Joyce Biwer, and they were united in marriage on April 8, 1967 at (Judy’s home parish of) St. Mary’s of the Lake Catholic Church in Baileys Harbor (now Stella Maris Parish-Baileys Harbor site), where he remained a member throughout his life.

Bill worked in the shipyards as a shipfitter for all of his working career. He initially took classes in Milwaukee and worked for a year at Peterson Builders, Inc. in Sturgeon Bay before going to work at Bay Shipbuilding Company in Sturgeon Bay in 1968, for 35 years. Bill joined Judy in picking cherries at Lautenbach’s Orchard in Fish Creek during the summer and then picked and grated apples with Judy, there in the fall. He also raked hay with his brother-in-law, Tim Biwer on the (Biwer) family farm, just down the road. In his retirement, Bill looked forward to wintering in Bonita Springs, FL and belonged to the local AMVETS post as well as the Eagles Club and the Moose Club.

He enjoyed camping with his family – initially with a pop-up, and then in 2004, he bought a truck to pull their bigger camper (which he made sure was large enough to accommodate his family). Bill and Judy had a permanent site at Beantown Campground in Baileys Harbor for seven years. They also enjoyed camping at Bay Shore Park near Dyckesville and also in Algoma. Earlier in life, Bill bowled in league and bartended at Worley’s Bowling Alley in Sturgeon Bay. He played softball in northern Door and loved attending Door County League baseball games, cheering on the West Jacksonport “Ports” which his nephew, Tanner Biwer, pitched for. Bill was also an avid fan of the Green Bay Packers and Milwaukee Brewers. He liked to go fishing, and off the dock in Egg Harbor was one of his favorite spots. Bill was homebody and was a very practical person in all aspects of life.

Bill was preceded in death by his parents; godparents, Don and Marcy (Fischer) Birmingham; two siblings, Mercedes and Walter Smith; and other relatives.

A memorial service will be held at 7:00 p.m. on Friday, October 22, 2021 at Huehns Funeral Home in Sturgeon Bay with Fr. Anthony Birdsall officiating. Military honors by the United States Navy and the Weber-Tess AMVETS Post 51 will follow the service.

Visitation for family and friends will be held at the funeral home on Friday from 4:00 p.m. until 6:50 p.m.

“Our family would like to express our heartfelt thanks to Dr. Christopher Keto, MD of Aurora in Sturgeon Bay and Green Bay, Dr. J. Joshua Rebhan of Door County Medical Center Clinic in Fish Creek, the staff at Froedert in Menomonee Falls, Austin from DaVita Dialysis in Sturgeon Bay, and his niece, Nurse Heather Anderson for all of the care and guidance you provided to Bill and our family.”

Huehns Funeral Home, Inc. & Door County Crematory LLC in Sturgeon Bay are assisting the Smith family. Expressions of sympathy, memories, and photos of Bill may be shared with his family through his tribute page at www.huehnsfuneralhome.com.