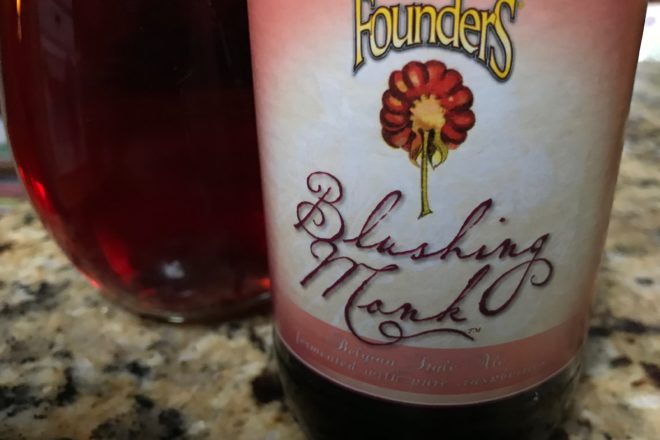 I passed by Blushing Monk many times, wondering why Founders Brewing Co. decided to release two raspberry-influenced beers. I love their Rubaeus. How could they improve on that? Or if not improve, what could the difference possibly be?

But I can pass by with those questions only so many times before realizing there is only one way to find out the answers.

According to the Blushing Monk label, it is a Belgian-style ale brewed with a “ridiculous amount of raspberries.” I wonder how many that is.

The label goes on to say, “Think of Blushing Monk as Rubaeus’ older sibling – more intense, slightly larger and just a little bit more mature.” It is a whopping 9.2 percent, compared to Rubaeus’ 5.7 percent.

I dive in and am very happy. First is the strong raspberry aroma, which might be one of the most beautiful smells in the world. And the taste is deep, deep raspberry – so that is how much a “ridiculous amount” is – riding high atop the warming, Belgian-style ale.

That ridiculous amount of raspberries is probably why a four-pack of Blushing Monk is so spendy – 20 bucks I paid. However, if, like me, you find raspberries to be a heavenly addition to beer, you won’t be thinking much about the cost of this excellent addition to the lineup of the Grand Rapids, Michigan, brewery. It’s just too good of a brew for you to be bothered by such petty, earthly concerns.

It was just a few summers ago when Schofferhofer Grapefruit Hefeweizen stormed these shores. I heard reports that it was selling out wherever it appeared.

The pomegranate variety is the latest release from the German brewer, and I expect it will be even more popular than the grapefruit variety, if only because of its beautiful ruby color.

It carries on the tradition of the Radler, which is the German version of the English shandy: beer mixed with a fruit-flavored soda. Legend has it that the Radler was created by a German country innkeeper during the cycling craze of the early 20th century. When he was inundated by a group of cyclists one day and worried that he might run out of beer, he began mixing beer 50-50 with lemon soda, and Radlermass was born. (It means “cyclist’s liter.”)

Radlers are low-alcohol beverages, and this Pomegranate Hefeweizen is no exception, weighing in at only 2 percent. It has a rich pomegranate aroma and that lovely color.

The taste is soft and enticing. I kept searching for the flavor of hefeweizen, but with each sip was seduced by the incredibly rich pomegranate flavor. This is a very refreshing beverage.