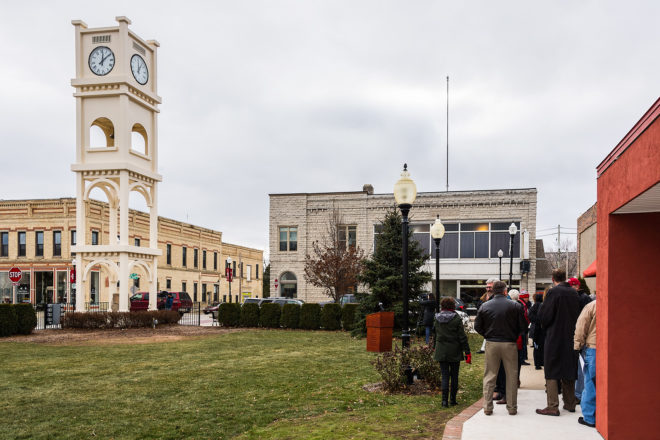 On Tuesday, Nov. 27, at 11:45 am the 117-year-old bell in Sturgeon Bay’s historic Old Bell Tower struck for the first time in nearly a decade, thanks to the Clifford and Clara Herlache Heritage Foundation, a fund of the Door County Community Foundation, Inc.

arched openings for the bell that hung inside. The bell was hung in 1901 and remained there until 1939 in dedication “to the people of Door County who have the courage to dream and give life their best.”

When the structure of the Bank of Sturgeon Bay’s clock tower weakened, the bell was donated to First Baptist Church in 1946. The bell remained at the church until 1990, the 100th anniversary of the Bank of Sturgeon Bay, when it was returned to the corner of Third Avenue and Kentucky Street. The bell was hung across the street from its original location, in the Old Bell Tower.

“We’re pleased to restore this community treasure and preserve a piece of Door County history,” said Bret Bicoy, president and CEO of the Door County Community Foundation. “The Old Bell Tower was designed to line up with the original Bank of Sturgeon Bay building, creating the illusion that the 1900 tower still stands. Sharing these interesting pieces of information with our community allows our history to live on.”

The Community Foundation would also like to thank Bay Shipbuilding and Bailey Electric for their generosity. Their work to restore the bell tower has ensured this community treasure will be around for years to come.