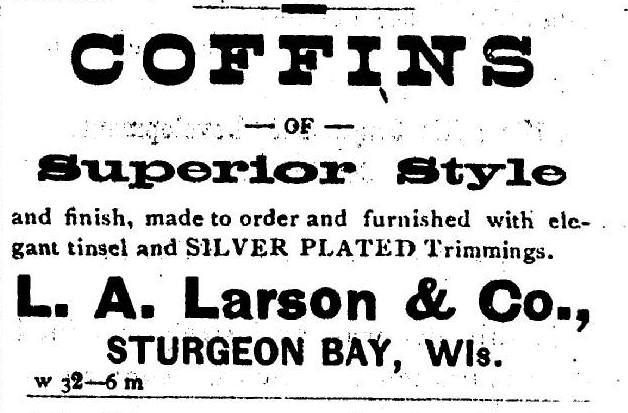 It is probably that the case of William Miller, of Forestville, against twenty-six young men of Brussel, to recover for injuries inflicted upon Mr. Miller during a “shivaree” party on the night of May 29th, will be settled out of court. The defendants have agreed to pay Mr. Miller part of the sum claimed by him, for this offer has been accepted.

The local base ball team ran up against a snag last Sunday when they tackled the Depere nine. The boys were about beginning to think they could play ball just a little bit, but now they aren’t too sure of it. The Deperes were the strongest team that ever played here and our “kids” were completely outclassed by them. They had Pitcher Hogan pretty nearly at their mercy, although towards the latter end of the game he began to be effective. Our boys batted the opposing pitcher quite freely, but superior fielding and playing on bases prevented their hits from yielding runs. Hub Wagener, who caught the latter half of the game for the local nine was struck by a pitched ball and was knocked senseless. The score at the close of the game was 22 to 2 in favor of the visitors.

An automobile on the streets in this city on Wednesday created considerable excitement, it being the first one many people here had seen, although it was not the first one that had ever been here. The occupants of the vehicle were Geo. Duvall of Kewaunee and his brother-in-law, Mr. Miller, of Milwaukee, the machine belonging to the latter gentleman. The trip had been made along the lake shore from Milwaukee, and after spending a few hours here the gentlemen left for Green Bay.

Two more of Door county’s sons have paid the supreme sacrifice fighting for their flag on the bloody fields of France, while eleven others suffered wounds that sent them to the hospital.

On Thursday word was received from the war department by relatives announcing the death in action of Anton Kercher of Forestville. The young man was a son of Mr. and Mrs. Anton Kercher and about 24 years of age. He volunteered in the service last fall, not waiting for the call. He and Thos. Sullivan joined at the same time and both went to France early in May.

On Sunday the information was received from the war department by relatives of the death in action of Harry Erickson of Sister Bay. Harry was one of the first to answer the call for volunteers for Company F, which was last summer organized in this city and received his early training here and at Camp Douglas, later going to Camp MacArthur and being sent across to France in February.

In the races Sunday, Commodore L. D. Smith of the Sturgeon Bay Yacht Club was winner of the finals by a large margin. He was accompanied by his young nephew, Rufus Kellog. Peterson and Maples placed second after cutting off their opponent’s wind at the finish line. Miller and Glomstad were third.

At the opening of the races the wind was very light but towards the latter part of the afternoon grew stronger, making the races most interesting. Nine crews participated in the event.

One cow was killed and another injured Monday evening, when Henry Schinktgen, driving a Chrysler sedan westerly on county trunk H, ran into a herd of cows being driven east.

Damage to the car was slight and no injury was incurred by Mr. Schinktgen.