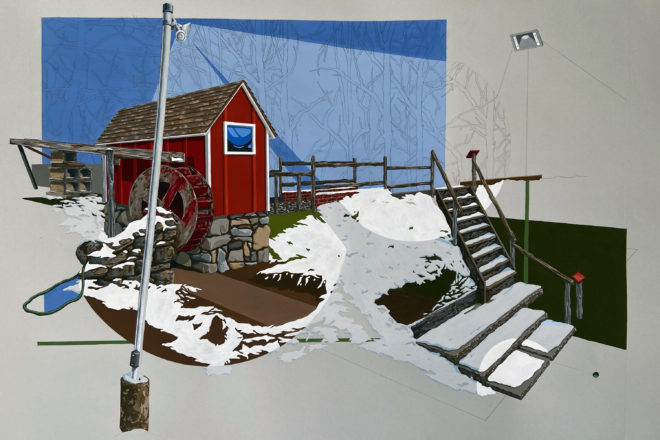 Elysia Michaelsen makes paintings of what is no longer there in its usual or expected state, yet persists in altered forms. She’s the director of education and residencies at Peninsula School of Art, and she will also have some of her work displayed in an upcoming exhibition at the Miller Art Museum, 107 S. 4th Ave. in Sturgeon Bay.

Her feature of six artworks, titled Until Next Time, will run May 28 – July 11 on the museum’s mezzanine, along with still-life paintings from the museum’s permanent collection. This particular segment of Michaelsen’s work depicts campgrounds in the off-season – part of a series she has done on recreational places when they’re out of season and empty.

“I like to see how things are tucked in, how they are put away,” she said. “I like that sense that something has happened here, something is going to happen here again, but right now it’s still – but it still has an energy about it. And I’m sort of piecing together the stories of the people who have occupied those spaces.”

This show will feature campgrounds, but she has also done paintings of community pools, ski resorts during the summer, and go-kart tracks and mini-golf courses during the winter.

“I like these places that really do have a buzzing energy when they’re up and running, and then have this awkward sense about them when they aren’t buzzing with that activity,” she said.

Michaelsen limits her work to the size of a piece of paper so it can fit on the dining table she has pushed against the wall in a second bedroom/studio. She uses Flashe vinyl paint, which can be diluted with water and produce results ranging from opaque to watercolor-like transparency.

“I had worked with gouache for a long time,” she said. “I wanted to try Flashe because many people had suggested it to me over the years, and it was just a little bit cheaper than gouache. I like the way it works, and it works with my budget.”

Michaelsen chooses to work on printmaking papers such as BFK Rives, which are soft and a bit more flexible.

Although she isn’t doing as many shows as she did during her MFA program at Arizona State University, she gets work into a few exhibitions every year – and it helps that the art school encourages staff members to remain active in their artistic fields.

“Crystal Chesnik [director of public programs and exhibitions] and I have networks that extend beyond the school’s,” she said. “We can play off each other, and our networks contribute to the school. At least once a quarter, the school gives staff a day to use the school’s studios to do some of their own work. It is really nice to see the other side of everybody in action.”

Michaelsen has more photographs to work from after visits to Colorado and around the Midwest – something she’s ready to welcome when she moves beyond campgrounds.

Her mini-golf scenes were a hit in a show at the art school last summer.

“They are especially humorous because they have giant figurines,” she said, “so I get laughter from people who find them quirky and odd – especially visitors to Door County who don’t see these types of places in the off-season and get a different perspective.”

Michaelsen remembers the allure of that shifted vantage point. When she interviewed with the school seven years ago, it was November, so it wasn’t until the following summer when she got to see Door County in all its bustling glory – energy that provides plenty of inspiration year-round.

“When the school is going full speed in the summer, when we have a lot going on and all of the students moving through and the faculty coming through, I find it really energizing to be around that buzz,” she said. “After watching them, I’m ready to go home and get in the studio.”