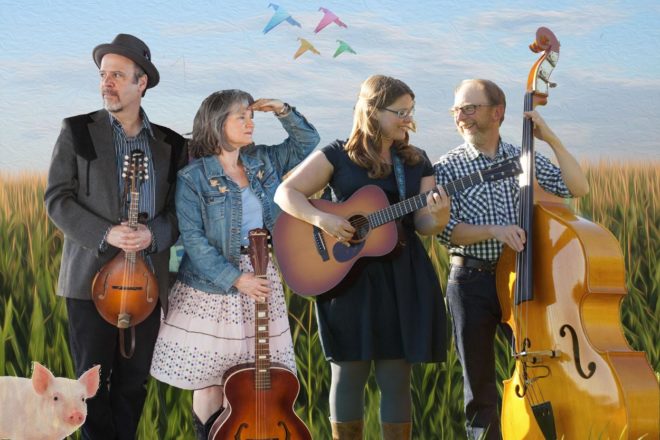 On March 23 at 7 pm, Paper Birds will take the stage at the Old Gibraltar Town Hall. Paper Birds is a pop-up band fronted by local folky Katie Dahl as well as California-based Claudia Russell. Dahl and Russell are joined by their respective husbands, Rich Higdon (bass and percussion) and Bruce Kaplan (mandolin and guitar). Paper Birds will play original songs and fan favorites, joining each other on harmonies and instrumental accompaniment.

Door County’s own Katie Dahl has earned accolades nationwide for the depth and power of her alto voice, the literate candor of her songs, and the easy humor of her live performances. Dahl is also a playwright whose musical Victory Farm premiered at Northern Sky Theater in 2012 and has since been made into a live cast album.

Russell is a veteran of California’s Americana music scene who has won songwriting honors from Boston to Austin. Known for her nimble, expressive voice and tightly knit songs, Russell brings grace and spunk to an eclectic array of music. Besides writing evocative songs, Russell is known for her vocal talent, which she has brought to bear on hundreds of performances in Door County, including many with Northern Sky Theater. Russell is an expressive and versatile singer, as at home on a soulful ballad as a Buddy Holly-style romp.

The Old Gibraltar Town Hall is located in downtown Fish Creek. Tickets are first come, first served, and they cost $18 each. Doors open at 6:30 pm.