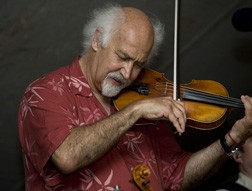 The formation of BeauSoleil is due to fiddler Michael Doucet’s desire to keep the unique southern Louisiana culture and music from extinction. But while BeauSoleil originated to help preserve his Cajun musical heritage, over the years it has also been known for its innovation; they are continually adding spice from other musical genres including jazz and Caribbean.

Doucet formed BeauSoleil with Dennis McGee, Dewey and Will Balfa, Varise Connor, Canray Fontenot, and Bessyl Duhon. Their band name literally means “good sun” and is a reference to a fertile region in Nova Scotia.

They have played at jazz and folk festivals around the world and have also appeared on numerous television shows ranging from CNN’s Showbiz Today to Late Night with Conan O’Brien. BeauSoleil also performs regularly on public radio, most notably on Garrison Keillor’s Prairie Home Companion.

In case of rain, concerts will be held at the Calvary Methodist Church in Egg Harbor. Carry-ins are allowed.