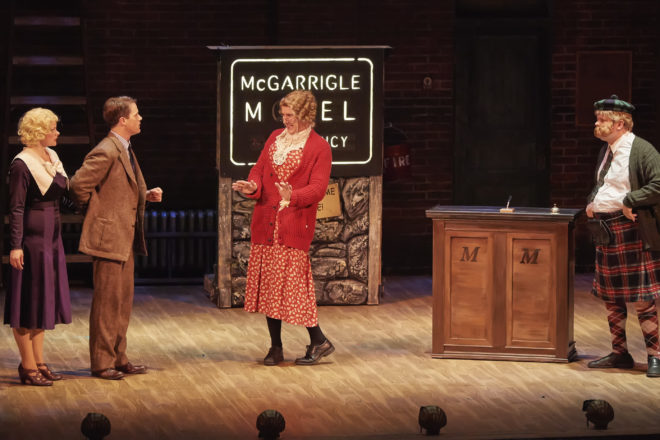 Erica Elam, Neil Brookshire, Kevin McKillip and Joe Foust assume the role of 150-plus characters in “The 39 Steps.” Photo by Len Villano.

Peninsula Players Theatre is ending its 81st season with a boisterous nod to The Master of Suspense, Alfred Hitchcock, with its final play of the 2016 season, The 39 Steps.

The 39 Steps is a comic spy thriller adapted from John Buchan’s 1915 novel and Hitchcock’s 1935 film of the same name. In 2005, English playwright Patrick Barlow adapted the original concept of using four actors to portray the film’s more than 150 characters, and that same year, The 39 Steps premiered at the West Yorkshire Playhouse.

Set in 1930s England and Scotland, the story begins with the handsome Canadian Richard Hannay, who sets out to a London theater to see a show about the incredible recollector, Mr. Memory. Within minutes, gunshots ring out and in the ensuing panic, a mysterious woman sitting next to Hannay begs him to take her back to his flat. There, she admits she is a counterspy being pursued by assassins for her knowledge of their plot to steal British military secrets.

But when the woman is murdered in Hannay’s apartment, he quickly flees and his fast-paced comedic journey to clear his name of murder, evade the police and assassins, and save his country begins.

The humor of the production hinges on the skill and speed of the four actors portraying more than 150 characters from Hitchcock’s film. Neil Brookshire assumes the role of Hannay while Erica Elam (who also starred in the Players’ 2016 shows Agatha Christie’s The Hollow and The Full Monty) masterfully steps into the role of three women with whom Hannay has romantic encounters. The two remaining actors, Kevin McKillip and Joe Foust (who directed and starred in The Hollow), play the rest of the distinctive characters, including a confused milkman, elderly election campaigners, old married innkeepers, and more. 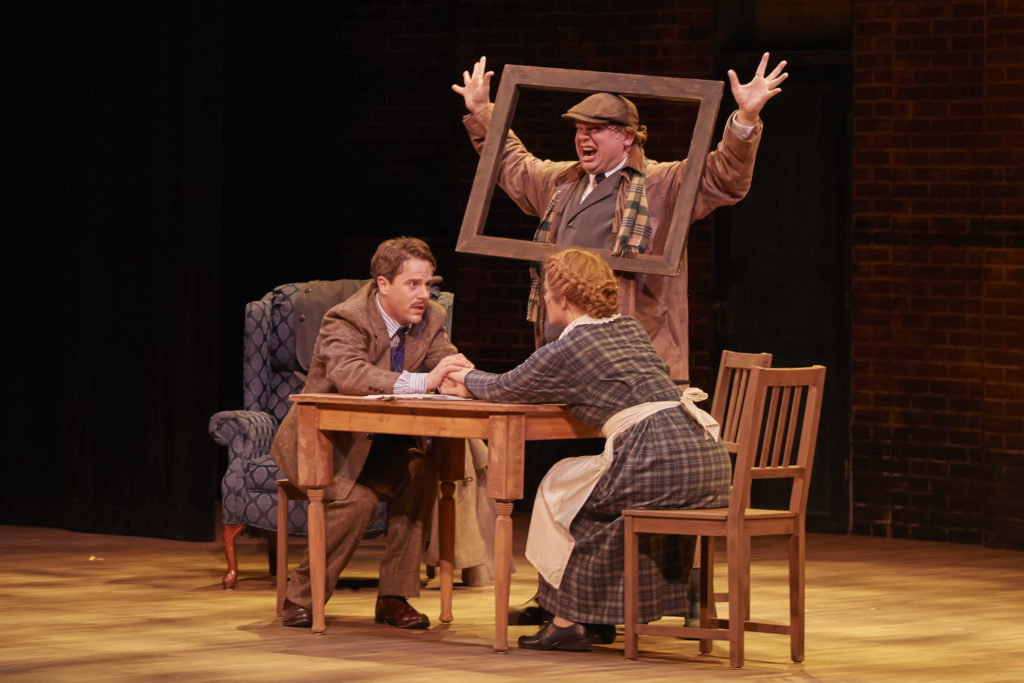 Neil Brookshire, Joe Foust and Erica Elam in a scene from “The 39 Steps.” Photo by Len Villano.

The relentless pursuit of Hannay keeps the production moving along quickly, making the lightning-fast costume changes of the cast, who occasionally play multiple characters at once, all the more impressive. Whether it’s swapping hats, wigs and accents or donning completely new getup with a quick step off-stage, the skill necessary to pull off these feats wasn’t lost on the audience.

The cast’s simulation of the smallest nuances (bouncing about in a car on a bumpy road or the fluttering of jackets as they hang onto the side of a train) and their synchronized efforts in engaging with props are key to the convincing re-creation of the film’s various scenes and action-filled moments.

Hitchcock fans will also enjoy hidden references to other films from the moviemaker, including Strangers on a Train, Rear Window, Psycho and North by Northwest. And for those who aren’t Hitchcock devotees, an evening filled with laughter and awe at the skill of these four actors is still to be had.