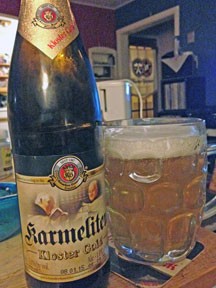 Plenty of people fall in love with a particular beer, but not many fall in love so hard that they decide to become beer distributors.

But that is exactly what happened to Tony Hart of Prairie du Sac, Wis., who fell for a malty German lager that a German friend of his introduced him to, Kloster Gold from the Karmeliten Brewery of Straubing, Germany, which is his friend’s hometown.

When Hart learned that Karmeliten is not distributed in North America, he had his friend get in touch with some people he knew at the brewery and suddenly Hart was on his way to becoming a beer distributor.

“The brewery has been amazing,” Hart said, adding that the most difficult part of the process was getting licensed by the state, which happened in January 2013. “I never sold beer before so I’m learning everything as I go. It’s a tough industry, especially in Wisconsin. I’m a company of two, myself and my German buddy. He was a German air force pilot who married an American and now lives in Georgia.”

Hart was in the U.S. Air Force when they met. He continues to serve his country in the Air National Guard, while his day job is as a pilot for Delta Airlines.

Hart explained that the brewery was started by Carmelite monks back in the 14th century, but has been under private ownership since the 1800s. 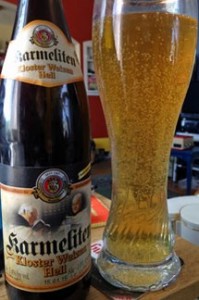 “They don’t have an export version of the beer,” Hart said. “It’s the exact same unpasteurized beer you get from Straubing, Germany.”

He began by distributing the flagship Kloster Gold, but since has expanded to include other German styles from the brewery.

“I have to commit to one or two styles at a time,” he said. “Whenever they bottle for us, it only takes about half an hour, but that’s taking away from their domestic production (with labels in German). We have to order at least two pallets of beer, which translates to about 156 cases of a style.”

While he realizes it’s a tough market to crack, he doesn’t think he is competing with craft breweries. His niche market is the people who love German beer.

“It’s a small market that I am trying to appeal to,” he said. “We’re just trying to find those folks and get them to try it.”

I found two Karmeliten beers locally – Kloster Gold, a malt-forward lager, and Kloster Weizen Hell, a clear and refreshing wheat beer. I look forward to trying more from the brewery, such as bock and fest beers.