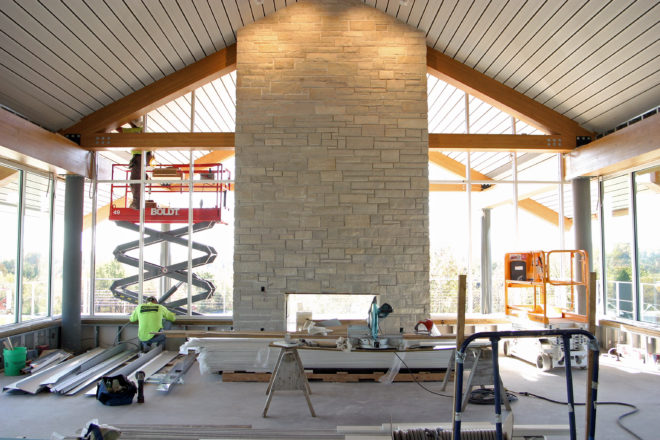 Work is in full swing at the Donald & Carol Kress Pavilion and Egg Harbor Library. Photos by Jim Lundstrom.

As Boldt Construction workers continued their build of the stately Donald & Carol Kress Pavilion and Egg Harbor Library taking shape on the hill overlooking the village, Village Administrator Ryan Heise and newly hired Event Director/Property Manager Jess Reinke recently gave a tour of what promises to be a jewel among public buildings in the county.

As they gave the tour, Library Ad Hoc Committee members Carol Kress, Judy Ortiz and Joyce Risser met with artists Stephanie Trenchard and Jeremy Popelka about placement of glass plaques the artists will create in their Sturgeon Bay studio to recognize the building donors on a donor wall.

The downstairs area will include the library, various lounging areas, a business center with teleconferencing capabilities and tied into an AV system, and a makers space.

“We want to have everything from paper crafting to eventually a 3-D printer,” Reinke said. “The dream is to have programs where the kids can learn stop-motion animation.”

Which prompts the question, “Why do kids get to have all the fun?”

A double-sided fireplace is on both floors of the complex.

Upstairs in the grand hall, Heise said, “a kicking stereo system with two subwoofers” will be installed and “somebody is donating a mini-grand piano. I’ll let you guess who.”

The view upstairs and on the wide wraparound deck is spectacular, with a much better view of the bay than anyone anticipated.

There is also a catering kitchen with elevator access.

Reinke said total capacity for the building is 400 people, with room for about 120 seated banquet-style upstairs.

She said people have already been calling for bookings.

“We walked through a potential wedding for 2019,” she said. She’s also heard from a man who wants to hold a three-day bridge tournament there, a condo association that is looking for a meeting space, as well as a retirement and birthday parties.

“The other piece is reaching out to people in Green Bay and Milwaukee, having them come up for conferences to use this building,” Reinke said.

Heise said the challenge in creating a rate scale for the space was balancing the desire to create revenue and cover operating and maintenance costs, with keeping it affordable to hold an event. So, for example, an arts group that wants to rent the building gets a discounted rate, but a wedding or other private event that closes the building to the public will pay market rate for the space.

“We want it to be a space that caters to the village, but other municipalities can come in,” Reinke said. “We’re not exclusive to anyone.”

She added that Tuesday night is community night, meaning a village resident can use the space free of charge. 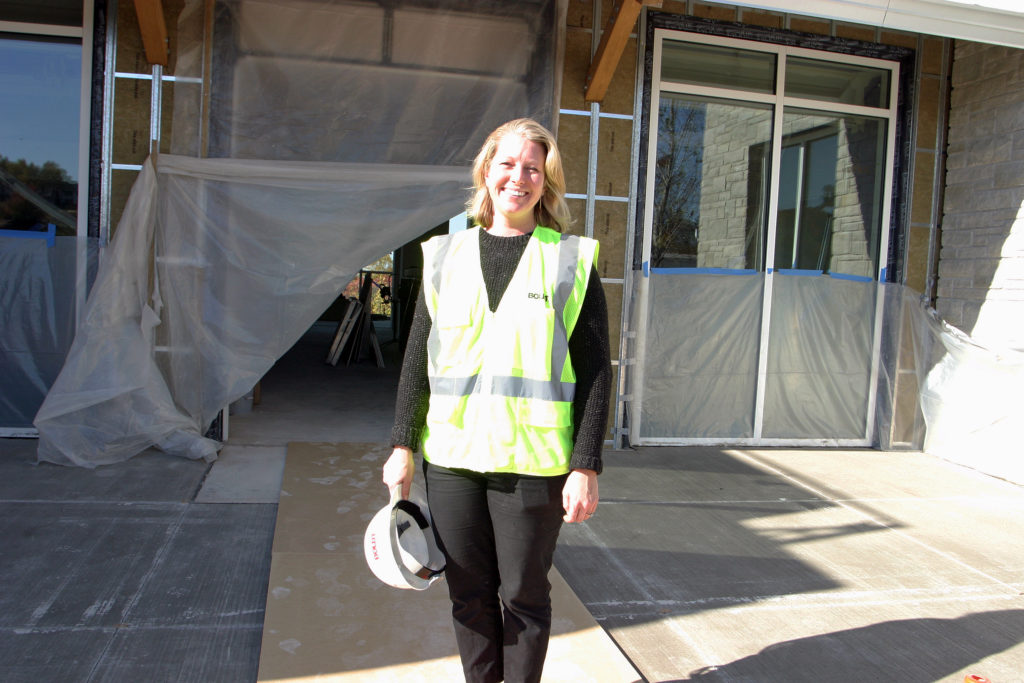 Reinke, originally from Somerset, Wis., has a degree in public relations and communication from the University of Wisconsin-Stevens Point, and has experience in marketing and events programing in her work with City Pages in Minneapolis and Willamette Weekly and Portland Monthly in Portland, Ore.

“It’s a really exciting opportunity,” she said. “I’ve never managed an events space before but have worked with a lot of people who have. It’s such a wonderful thing for Door County.”

To learn more about the rental space at the Kress Pavilion, contact Jess Reinke at 920.204.6169 or via email at [email protected].