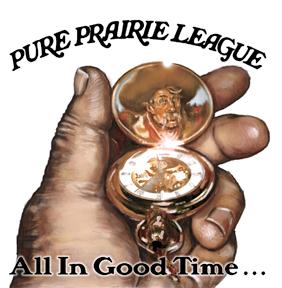 With a sound that proves you can go home again, Pure Prairie League is all about great country music. The country band favorite will perform at the Door Community Auditorium on Saturday, July 11 at 8 pm.

As so often happens in the world of music, Pure Prairie League’s founding was all about timing – and the timing was perfect. Playing cover tunes at local bars in southern Ohio, a group of young musicians from southern Ohio were honing their performance skills.

Pure Prairie League was signed by RCA records following an appearance in Cleveland, Ohio. Pure Prairie League, their premiere album, was released a year later in 1972. Notably featuring a 1927 Norman Rockwell Saturday Evening Post cover, the illustration included an old cowboy named Luke. That cover immediately caught on with the band and has been included on the cover of every Pure Prairie League recording since that first one.

Following the release of that first album, Pure Prairie League has weathered bumps along the road. During the years preceding the conclusion of the Vietnam War, the band temporarily relocated to Canada. Band members changed and RCA dropped the band.

RCA eventually resigned Pure Prairie League, and shortly after Two Lane Highway (1975) was recorded. “Amie,” a song about a sometime love, was released as a single from the album, and remains a classic to this day.

In 1978, their final album under the RCA label, Can’t Hold Back, was recorded. It was strongly influenced by rock, noticeably by the addition of saxophone to the elimination of pedal steel guitar.

Credited with bringing country music into the mainstream in the mid-1970s, Pure Prairie League has weathered the multiple musical movements to emerge tried and true. And with the release of All in Good Time, fans have discovered Pure Prairie League all over again. The band’s timelessness has been assured.