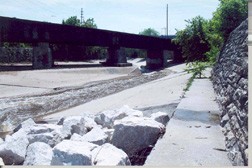 The Corps’ project to remove concrete slabs in the Menomonee River starts after the large rocks where the Milwaukee Metropolitan Sewerage District’s project ends. U.S. Army Corps of Engineers photo.

The U.S. Army Corps of Engineers (USACE) announces a recent contract award to restore the natural ecosystem in the Menomonee River in Wisconsin.

The Menomonee River is a tributary of the Milwaukee River and discharges into the federal navigation channel in the Milwaukee Harbor in Milwaukee. This particular area of the river is within the EPA’s Area of Concern, AOC. During the 1960s the Menomonee River was lined with concrete, for flood control purposes; these actions have proven to adversely affect the health of the surrounding ecosystem

The philosophy and goal at USACE, behind ecosystem restoration, is to restore and sustain the health, productivity, and biological diversity of ecosystems and the overall quality of life through a natural resources management approach.

Plans include several opportunities to delist the Milwaukee Estuary AOC by accomplishing the following:

• Decrease peak velocities within the channel

• Improve the overall health of the estuary

To achieve the improved fish passage and habitat restoration the plans for this project include developing portions of the river with six still locations, or pools, and six rapid moving locations, or riffles.

The Menomonee River watershed covers 136 square miles, including portions of Washington, Ozaukee, Waukesha and Milwaukee Counties and flows approximately 32 miles in a southeasterly direction from its headwaters in the Village of Germantown and the City of Mequon to the Milwaukee River in the Milwaukee Harbor Estuary.