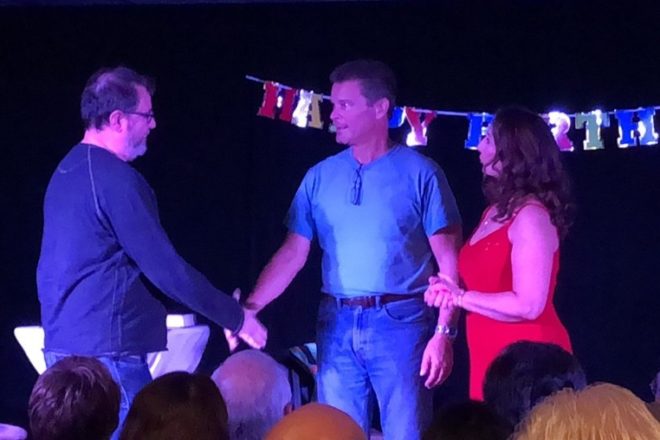 When Stuart Champeau and Lola DeVillers founded Rogue  theater in 2013, Champeau said, “Our theme is theater for the community. There are lots of talented people in Door County who are looking for a space to express themselves.”

In the past five years, Rogue has provided many community residents the opportunity to perform and has taken theater around Door County and beyond in its own space in the Jaycee Clubhouse in Sturgeon Bay and, in the winter months, at various restaurants and clubs, where dinner theater is offered.

In January, Rogue expanded the opportunity for “talented people to express themselves” by inviting aspiring playwrights to submit original scripts with the possibility of having them produced by the company.

Champeau and DeVillers had no idea what to expect, but were delighted to receive a dozen entries, from which four finalists were chosen.

The winner, announced April 22 at the last show of Rogue’s winter season, is Murder on Cottage Row by Stanley B. Eisenhammer. Champeau said that, while all the entries had merit, “the winning script was set apart by how well it followed the parameters of what we were looking for – length, the inclusion of music, lots of comedy (with a lot of Door Countyisms), a really great plot, hidden clues that will help the audience solve the murder and even a break to allow the audience to vote for who they think the murderer is. Rogue will likely produce it in the coming year.”

Eisenhammer, a partner in a suburban Chicago law firm, has been coming to Door County for 30 years, and built a home on Glidden Drive a decade ago. Murder on Cottage Row is the second play he’s written, along with some short films.

“I’m really excited that my play is going to be produced,” Eisenhammer said. “There are eight characters, and all except the woman who is murdered are suspects. The idea for the play came from the 1954 movie, Woman’s World, whose cast included June Allyson, Lauren Bacall and Fred MacMurray.”

Asked if he plans to continue writing plays, Eisenhammer said, “Oh, yes, I’m not done yet.” He chuckled as he said, “My son is an actor in L.A., and I need to write things for him to appear in!”

Champeau noted that the three other finalists – Murder at Al Johnson’s by Tim Toepel, The Beloved Songbirds by R. M. Hunt, and The Dancing Men by Tonie Bear and Ian Toyne – all have promise and may be chosen for production later. He’s considering nights when the plays can be read with input from the audience and/or writers workshops.