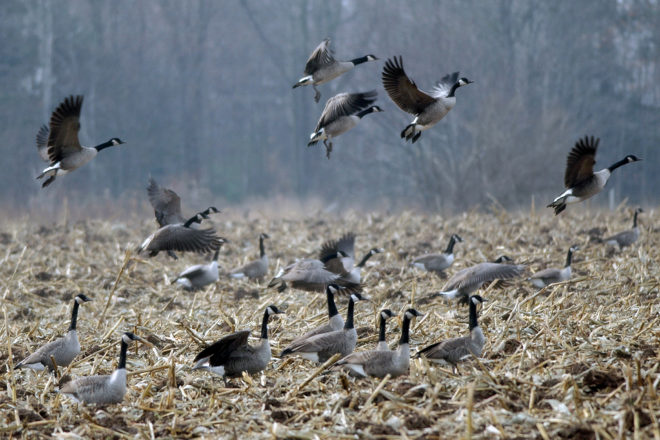 Every now and then something quite wonderful happens as I sit staring at a blank page collecting my thoughts for a story. As usual I had scribbled the night before at least two pages of words, ideas and phrases marked with circles or bold underlines to set apart important thoughts frequently connected by arrows or squiggly lines, and then gone to bed hoping that my subconscious powers would go to work!

With so many Canada geese heading south, or lingering to rest and feed, I simply had to honor their return as though mysteriously nudged into paying my deepest respects to these magnificent creatures.

I had just finished reviewing my notes this morning, giving several key possibilities a numbered sequence, when suddenly there occurred a beautiful honking outpouring right over the house. Racing for the door leading to the upstairs deck I hurried for a look; completely forgetting about the charcoal grill outside the door and consequently nearly breaking my neck!

The flock of about 40 “honkers” was so low that my bumbling commotion made them veer to the west. As usual I quickly began counting, hoping that the total would be a multiple of six. It was Aldo Leopold who with his wildlife management students counted many migrating flocks of Canada geese (not Canadian geese!) over a several-year period and found that they tended to be in flocks of six or multiples of six.

Even though most of their clutches of eggs can range from four to 10, they average out to be five or six. One also can assume a certain percentage of casualties during their precarious period in late summer when all geese are flightless. The thought is that the average family size during the fall migration numbers about six.

In all the “Vs” of honkers I’ve counted I don’t remember both arms of the “V” had equal numbers of birds. One thought is that the windward side of the “V” tends to be the longer. Young geese, not yet capable of flight, also tend to form a slanting line or “V” when swimming in their parent’s wake.

There is little doubt that flying in a “V” formation has its benefits. Naturally there is a slipstream of disturbed air formed behind a bird while flying. This can be quite a considerable mass of resistance following a Canada goose weighing anywhere from seven to 14 pounds and traveling at a speed of up to 40 or 50 miles per hour.

A bird flying directly behind the bird ahead would obviously experience rather difficult flying. Flying slightly to one side enables the goose to make use of the upswelling air and thus save a lot of energy. In fact one researcher calculated that by flying in formation, the geese are able to cover about 70 percent more distance than a bird flying by itself.

Canada geese in their northerly spring migration tend to follow quite closely the movement of the 35 degree F. isotherm. Birds in southern Missouri on Feb. 10, for example, will not have reached the James Bay region (southern Hudson Bay) until April 30. I presume the autumn southerly flight also consists of quite a few resting and feeding stops along the way.

The genus name of the Canada goose is Branta, commonly thought to mean burnt. One can assume that the dark, brown-black color of the upper parts and neck and head of the goose gives the bird the appearance of being charred.

Another equally exciting experience in fall is first hearing and then seeing a flock of migrating sandhill cranes. Forty years ago this never would have happened. Their numbers were so low that just seeing a few each summer was a thrill. The preservation of wetlands through the decades has helped increase their population in much of the upper Midwest.

Added to the pure joy of being close to them, often through simple luck, occurs when we suddenly approach a pair or several of the stately birds probing a soggy wet field for their food. Apparently they have become conditioned to the cars and usually don’t even lift their heads upward, as long as we proceed slowly and remain in the car. 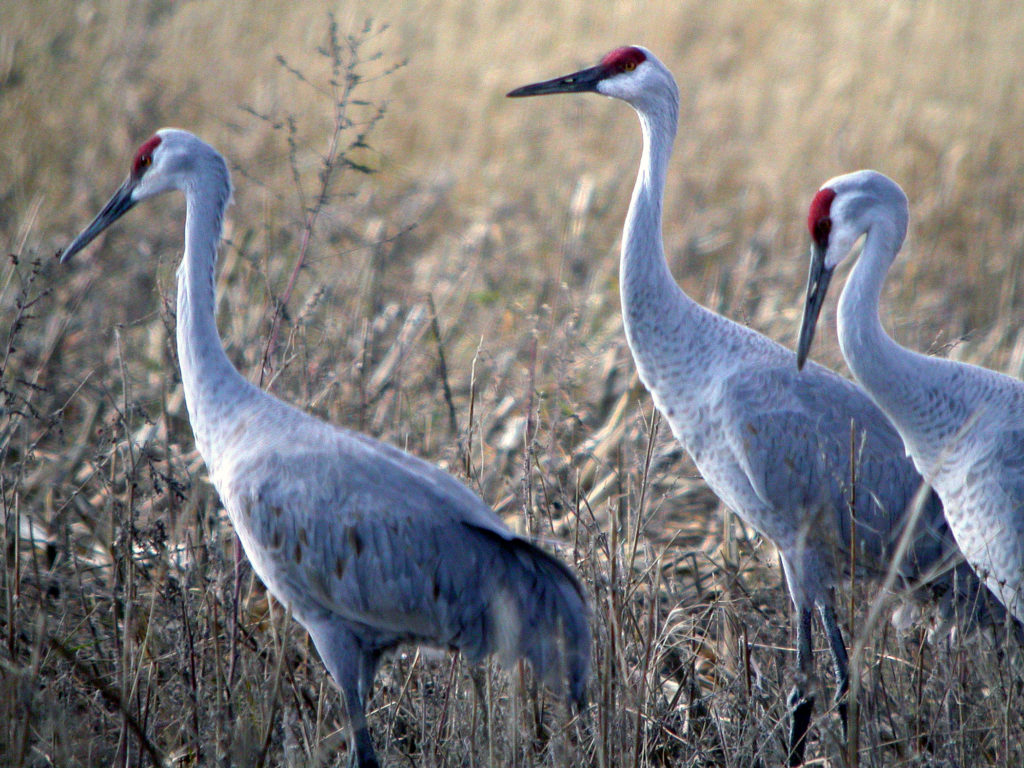 Sandhill cranes will gather in large flocks before they head to their wintering grounds. Photo by Roy Lukes.

A spine-tingling thrill comes when the cranes let loose with their calls. In the case that you’ve not heard sandhill cranes, I hope you will someday experience the joy of their wild, far-reaching voices. Due to a windpipe that is about five feet long, with nearly half of it looped within the keel of the breastbone, somewhat like a French horn, its calls are clear, shrill and trumpet-like in quality: “ga-ROOO-a-a-a-a.”

Marshes, bogs, open edges of swamps and even lowland fields are now sought after by the great sandhill cranes, some arriving from nesting sites to the north. Waste grain and corn remaining on the ground, along with plenty of standing corn, will constitute the bulk of their diet. Other food searched for includes roots, tubers, seeds, berries, mice, snakes, frogs, crayfish, earthworms, crickets, grasshoppers and beetles.

If you do see a small group of these cranes, look carefully for juveniles in with the slate-gray adults having the bare reddish patch on the forehead and upper face. Young birds will have more brown feathers. Their heads will be tawny and they will lack the red forehead patch. In fact these youngsters will not acquire full adult plumage until they are about 2½ years old.

Our records show that the cranes will gather in large flocks as the autumn season progresses, feeding in cut corn and grain fields. Most tend to leave by the time our gun deer season starts in later November. We don’t see them during our Christmas bird counts in late December. However, there have been two counts when cranes were sighted. The first was on Dec. 15, 2001, when eight were seen in a field northeast of Sturgeon Bay, on a day that warmed to 40 degrees, and the other was on Dec. 20, 2015 when two individual cranes were found in southern Door County.

I marvel at the appearance of an increasing number of sandhill cranes returning to Door County each spring, a county where development is proceeding at a brisk pace. Deep down I feel that these cranes are trumpeting a clarion message, “Save, protect, preserve! Please help us!”