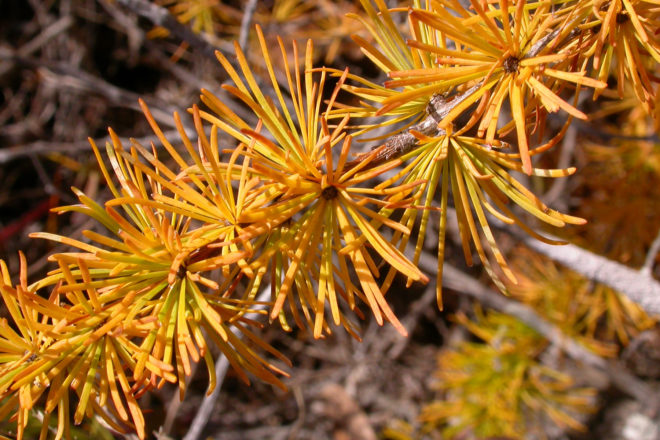 Tamarack needles grow in clusters and will drop from the tree before winter sets in. Photo by Roy Lukes.

Typical of the oaks, there is a red oak near our front yard that is tenaciously hanging on to its leaves. I look at one leaf being spun around by the wind and wonder how long it can be subjected to such constant stress before it finally comes loose and falls to the ground.

Suddenly one does come off and sails down in much the same fashion as a paper airplane. Few trees, in my opinion, produce dried leaves that have better “loft time” when they fall than the northern red oak.

One day, just for the fun of it, I want to organize a leaf sailing contest in early November. We’ll each take our entries to the top of the observation tower at Potawatomi State Park and, like runners starting a race, drop our leaves on signal. The object will be to see whose leaf takes the longest time to reach the ground. In other words, the last one to land, or reach the finish line, will be the winner.

There is another tree that has been colored to perfection and is just now beginning to gracefully drop its leaves, the American tamarack. Their magnificent smoky gold performance being staged right now would be quite insignificant if many of the deciduous trees, such as the maples, birches, basswoods and ashes, would also be at their peak of fall color. Fortunately the tamaracks have the entire stage to themselves, front and center.

Many call them larches even though they are distinctly different in several ways from the European larch and the western (U.S.A.) larch. The American Indians, particularly those of the great Algonquin Nation, referred to them as “hackmatacks.” No one seems to know the derivation of the word tamarack. In fact Webster’s Third International Dictionary simply says, “origin unknown” while the American Heritage Dictionary says it is from the language of the Algonquin tribe. I prefer to call them tamaracks because the word sounds a little like hackamatack. 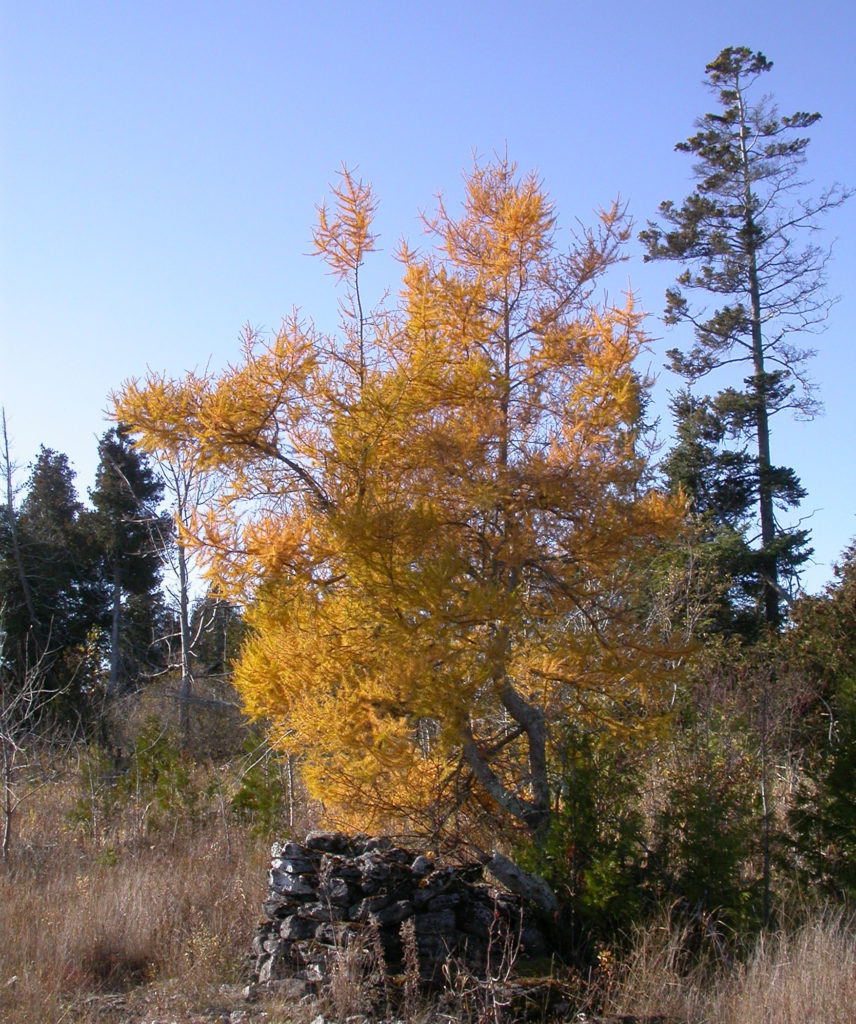 American tamarack trees need space and cannot stand to be crowded by other trees. Photo by Roy Lukes.

The tamarack swamps and bogs of Wisconsin of years ago must have been very impressive. A terrible invasion and infestation, perhaps from the North, of the larch sawfly (Pristophora ericksonii) between 1900 and 1910, killed millions of Wisconsin and neighboring state tamaracks. We are admiring the considerably smaller second generation trees today.

What were the dimensions of those big mature “hackmatacks” at the turn of the century? Well, the record in Wisconsin back in 1987 was about 9.5 feet in circumference and 85 feet tall. The national record at that time was growing in Maine and was 12 feet three inches around and stood 92 feet tall.

I think back fondly to my high school days in Kewaunee and one of the football and basketball stars was called “Tamarack,” usually “Tam” for short. The qualities of tamarack wood are: heavy, hard, very strong, coarse-grained and unusually durable. Every one of these characteristics fit “Tamarack” Hlinak to a T.

It was Emma Toft who advised me, when I began heating my house with a wood stove, to never burn tamarack in the old cast iron Queen. “Burns much too hot,” she said, “and will in time ruin the stove’s dumping grates.”

Look for black spruces (Picea mariana) wherever tamaracks grow. They are true partners of the swamps and bogs. Both do quite well in cold, wet habitats, and neither can stand shade from other trees. In fact the tamarack doesn’t even like to be crowded by its own kind.

The American tamarack, Larix laricina (lar-a-SY-na) is considered to be the most northern growing conifer on this continent, growing north in Mackenzie to the Arctic Circle, around 67 degrees N. Latitude, and thriving there by the light of the midnight sun.

Its counterpart in Asia, Larix siberica, produces the most northern coniferous forest in the entire world in Siberia at 72 degrees N. Latitude. Talk about being hardy! This is approximately the same latitude as the very northern tip of Alaska.

Notice that I said coniferous as opposed to evergreen. The last living evergreen tree on this continent is the black spruce, not quite as far north as the tamarack.

A close inspection of tamarack needles on a tree shows that they grow in clusters from tiny knobs called “short shoots.” By mid-November the needles will have fallen leaving the trees bare, genuine deciduous conifers. The other two in this category in the world are the bald cypress and the dawn redwood.

The tamarack is said to reach its pinnacle of perfection north of Lake Winnipeg in Canada. That site is on my “Must See” list for future years along with the high valleys and lower mountain slopes, between 2,000 and 7,000 feet elevation, of northern Montana and Idaho where the tallest larches in the world grow, the western larch, Larix occidentalis (of the western world).

I can’t admire a stand of golden tamaracks on a sunny November day without getting the feeling that they are phosphorescent, that they actually glow from their own power source. The brilliant swamp I most enjoy is seen from what I call a “shunpike,” at least 125 feet above the glorious tamaracks. It’s one of those lonely roads not to be advertised for fear that it would soon lose its charm and beauty because of bumper-to-bumper traffic.

Autumn’s finale is reaching its zenith, and, lucky for all for us, it is occurring in the wetlands, the areas least likely to be developed, where mosquitos reign supreme throughout the warm months.

Head for the swamps and fill your eyes with gold!