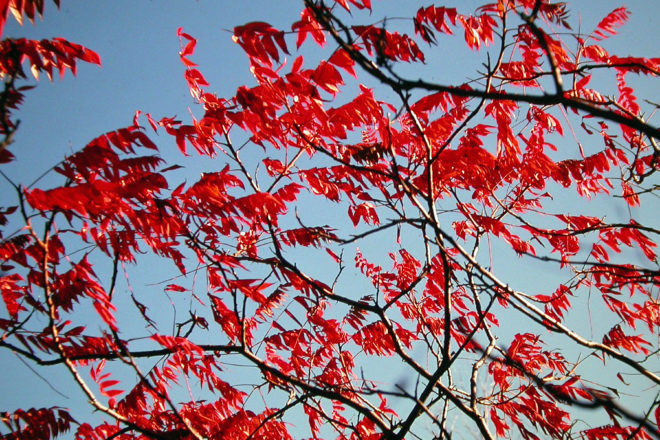 A view up to a blue sky beneath the red autumn leaves of the staghorn sumac is quite a colorful scene. Photo by Roy Lukes.

Have you ever mistaken wood for stone? This happened to me one time as I talked with a naturalist with whom I happened to be hiking. He wore a handsome bolo tie, which I remarked about, saying, “That’s an unusual polished stone. What kind is it?” He chuckled and his eyes sparkled as he replied, “That’s not stone, it’s wood.” He had taken a staghorn sumac trunk about an inch-and-a-half in diameter, sawed it through at an angle, sanded and varnished it, making it into a striking neckpiece.

The wood had some resemblance to an attractive chatoyant gemstone, a tan African tiger-eye stone. This form of quartz, enclosing thousands of tiny fibers, produces, when polished, shifting patterns of dark and light as the stone is slowly moved back and forth. The color of the wood was a greenish gold streaked with darker brown olive-green. I remembered the incident a few years later as a group and I hiked along an old abandoned road flanked by many dead light gray, bleached out, weathered sumac trees. Cracking off a branch I sliced into it with my knife, and there it was, that same dazzling golden color.

The staghorn sumac, one of about 500 members of the cashew family, is one of the fastest growing of all trees. Often this plant is considerably shorter than the height of 13 feet and having a diameter of at least three inches required in measuring record-size trees in order to qualify as a tree. It’s not uncommon to come upon one of these unusual trees between 25-30 feet tall. Its lush summer growth is quite tropical in appearance and will soon decorate the fall landscape with some of the most brilliant, blazing shades of red and orange.

Deer are extremely fond of the winter twigs and break off many of the small rather soft velvety covered branches in their search for food. This is one of their favorites. The fine hairs of the new stems resemble the early summer antlers of the male white-tailed deer; hence the name of staghorn sumac has arisen.

Whenever we discuss the use of various wild plants as food for people, one question invariably arises. “How can you distinguish staghorn sumac from poison sumac” – a plant I have yet to come upon in Door County north of Sturgeon Bay? Poison sumac grows in swamps and on the margins of bogs. Its leaves are without teeth on their edges, and the fruits consist of loose drooping panicles of light yellowish-green berries much like those on poison ivy.

A number of species of songbirds and a few gamebirds consume the winter fruit of the staghorn sumac, birds including the American robin, eastern bluebird, dark-eyed junco and ruffed grouse. Chipmunks also relish the velvety maroon drupes while cottontails favor the young twigs. 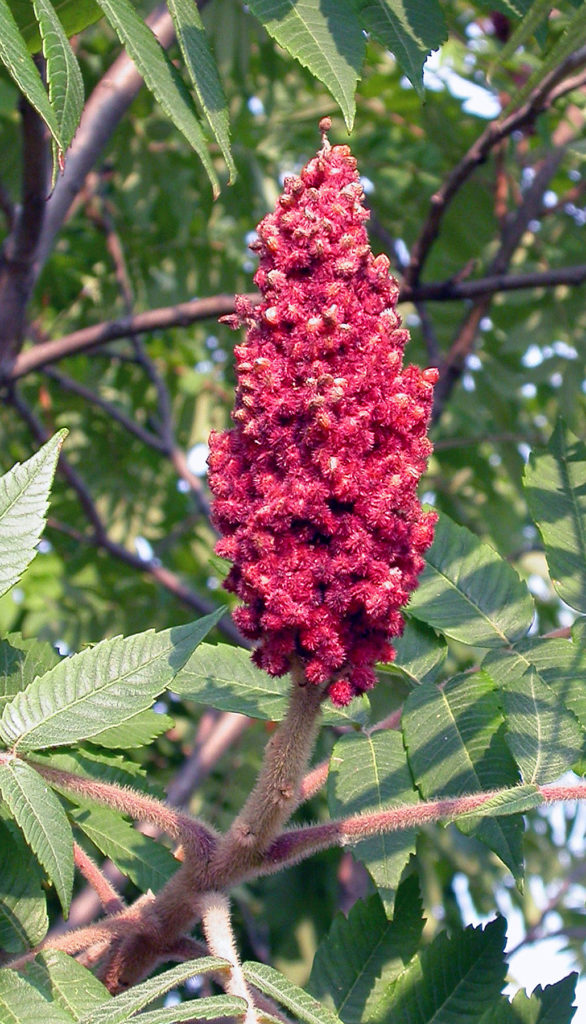 The fruit of staghorn sumac is deep red and can stay on the tree for most of the winter. Photo by Roy Lukes.

As common as this plant is, the more one analyzes it the more outstanding it becomes. This common short-lived woody plant seems to do best in poor, dry, rocky, gravelly soil. All winter long its stiff, awkwardly crooked skeleton-like silhouette, topped with many maroon clusters of fruits stands out boldly against the snow. Come summer, its clean-cut, tropical-looking, fern-like compound leaves tend to produce a dense covering so as to conceal the branches and trunks.

The genus name of sumac is Rhus (roose), a Celtic word meaning red, or a Greek word for run in allusion to its roots. Staghorn sumacs are quite common throughout the region. Their species name, typhena (tie-FEEN-a), comes from typha, the cattail, for its velvety branches similar to the cattails. Some say that sumac is from the Arabic word “Simaq,” which is what they call their species. There are as many as 50 kinds native to Europe, Asia and Eastern North America.

Deep wine-colored, cone-shaped fruits, sometimes called bobs, are quite tart to the taste. Small hairs covering the fleshy pulp contain malic acid identical to that found in unripe apples. Native Americans of this region relished the fruit of the staghorn sumac. They would crush the fruit in cold water, strain it to remove the hairs, sweeten with maple sugar and drink year around. It’s called Indian Lemonade. They were so fond of this food that they collected and dried many of the velvety red fruit heads in late summer, then stored them for winter use. This liquid is pink in color and very tart to the taste. When you rush out to make some, be sure not to boil the fruit in water. This releases a certain amount of tannin, which would make the drink somewhat medicine-like.

Two other interesting uses of the staghorn sumac have been known for many years. Native Americans learned that perfect maple sap taps could be made from the young shoots. Their pithy centers were easily reamed out, leaving a neat hollow tube. Leaves and root bark of this fascinating tree are rich in tannin, used for tanning leather, and the central pith of the stem, mixed with bloodroot, produces an orange color, used by Ojibwe Indians.

And then comes fall, the season for the sublime sumacs. Now it need not play second fiddle to any tree around, no matter how small it may be. Its radiance, the glowing warmth of its oranges and reds, mixed with subtle shades of light green and rich maroon, blaze away like the front row of trombones in a marching band. Yes, they announce their presence.