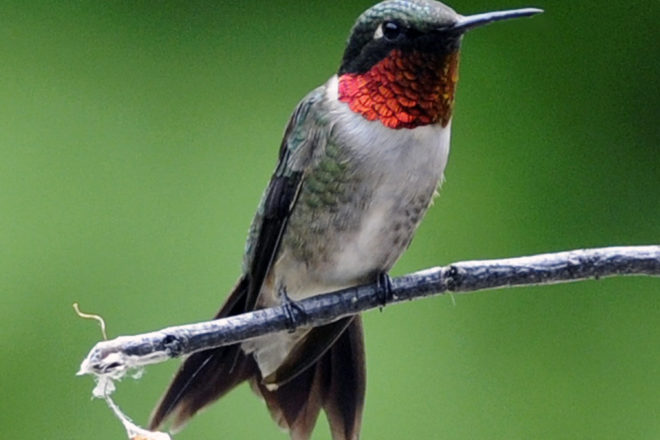 The brilliant red gorget of this male ruby-throated hummingbird glimmered in the sunlight. Photo by Roy Lukes.

Those tiny winged jewels, the ruby-throated hummingbirds, apparently have done quite well this summer, judging by the reports we have been receiving. Two adult males sparred over feeder rights most of the season and now several females and youngsters try to get in a few sips.

The month of August found the hummers making many visits to the tall flowers in our front yard as well. They may extract nectar, like the two female monarch butterflies have been doing, but often they will find tiny insects which are also attracted to the blossoms.

The two feeders we now use are circular with 10 feeding ports. Each feeder has a wide opening to pour in the sugar water, which makes it very easy to clean.

Our favorite feeder of years ago, which unfortunately broke, consisted of a small four-ounce glass bottle suspended upside down with a two-inch downward angled glass tube. It was located about six inches outside our north kitchen window of the upper rangelight where we lived.

One time Charlotte had cleaned and filed the feeder indoors and, simply lowering the window, was in the process of hanging it back up. Much to her surprise the hummingbird came to drink while she was holding it, a thrill of a lifetime.

That same summer I was standing outdoors after supper next to a large patch of common milkweeds in full bloom, east of the garden, enjoying the heady fragrance of their perfume when in buzzed a male hummingbird. Apparently unaware or unconcerned of my presence, it worked the 25-foot patch over from one end to the other.

No sooner did it disappear when in flew a female. Her white throat and the white tips of the outer tail feathers easily enabled me to distinguish her from the male. Soon the male was back. Enough sunlight remained to occasionally bring into brilliance his flaming red throat feathers, referred to as his gorget (GOR-jet). Now and then he would be in the right position to be able to momentarily perch on a leaf as he probed the milkweed blossoms for food. This little three-and-a-half-inch creature next flew up to a staghorn sumac branch near me and chattered excitedly in his high squeaky voice that is so seldom heard.

Perhaps he was just warming up for the next show. Now came a performance too thrilling and intricate to describe in its entirety. Suddenly he swooped upward high over my head, chattering all the while, and went into a pendulum-like flight having an arc of about 40 feet. Just as though an invisible strand governed his flight, back and forth, back and forth, up and down he swept.

At least a dozen high, swinging, dipping maneuvers were performed by this master flier. All the while he “swung” in his dazzling flight, out bubbled his nearly inaudible but musical song, loudest at the peaks of the arcs. Experts believe these so-called pendulum flights are used by most, if not all, North American species of hummingbirds and may be done during courtship or even to express anger or resentment.

How these small bundles of life are capable, as has been proven through banding, of migrating across the Gulf of Mexico, a 500-mile nonstop flight, let alone knowing they will come back to land, would appear to be an unattainable feat, yet they accomplish it. Professional physiologists have “scientifically” calculated that it is physically impossible for a ruby-throated hummingbird to fly a distance of 500 miles without periodic rests. It is fortunate that hummingbirds can’t read or that someone hasn’t informed them of this “fact.” 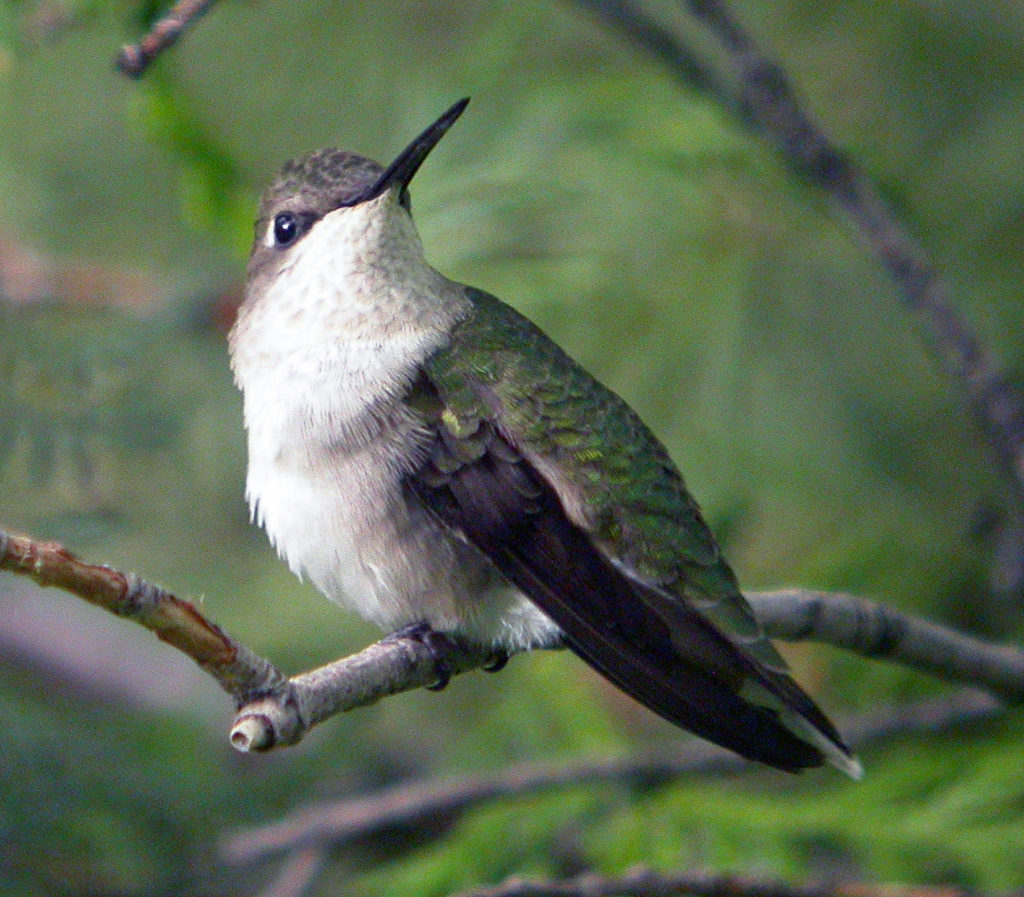 Ruby-throated hummingbirds are the only species to nest east of the Mississippi River. In 2015 the last report of someone seeing a ruby-throat in Wisconsin was in northeast Milwaukee County on Oct. 26.

However, in autumn, as birds begin to migrate, two other species are sometimes seen in our state. Three reports of Anna’s hummingbird came from southern Wisconsin in November last year and four reports of rufous hummingbirds came from widespread areas of the state from August to November. Two local residents were seeing rufous hummers last fall, one southeast of Egg Harbor and the other in Southern Door. The first one was observed on Sept. 20 and the last sighting was Nov. 15. 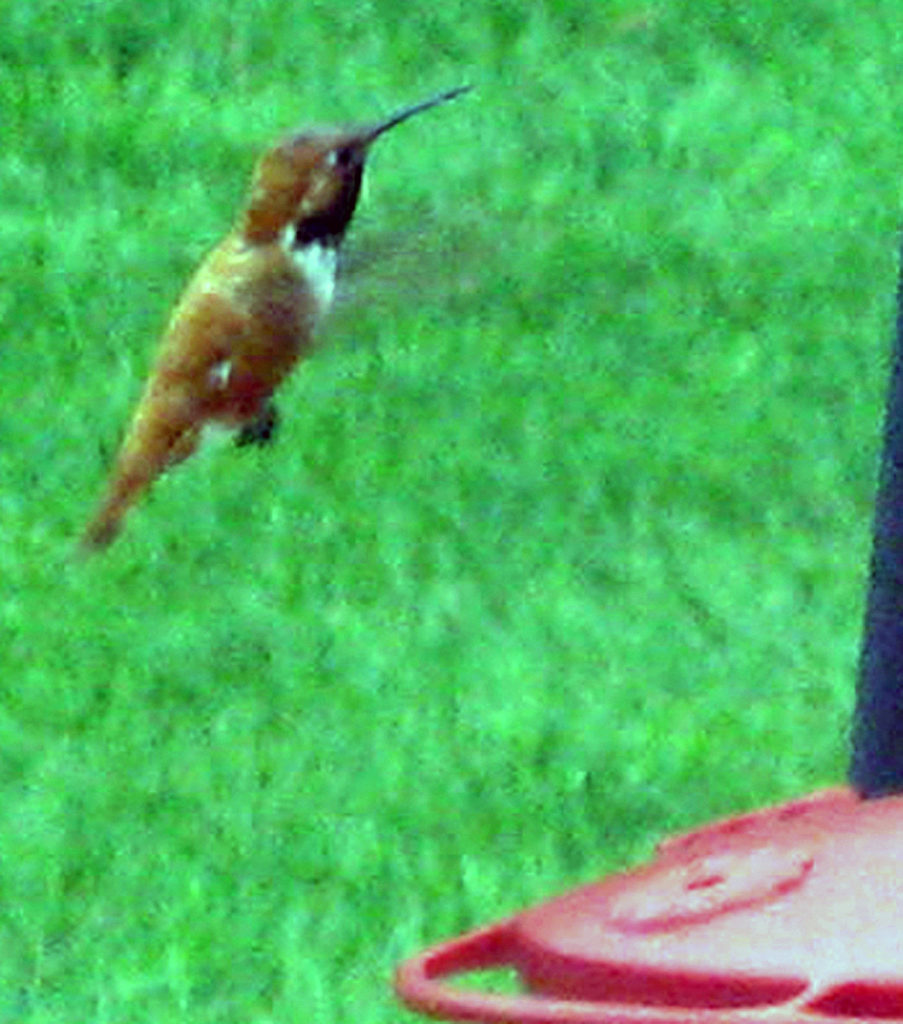 This low-resolution image of the rufous hummingbird that visited Door County last fall reveals the brown, rather than green, back. Submitted.

Please keep your hummingbird feeders filled well into fall for the late migrants and perhaps you may be blessed with a visit by one of the less common species. It has been proven numerous times that there are bound to be late migrating hummers and that the valuable “fuel” they get at your feeders may be critical in enabling them to continue their long arduous flight to the shores of the Gulf of Mexico.

Wait a few weeks, until you no longer are seeing even one hummingbird at your feeders, before taking them down for the season. Take good care of your hummers and they will reward you in numerous ways.