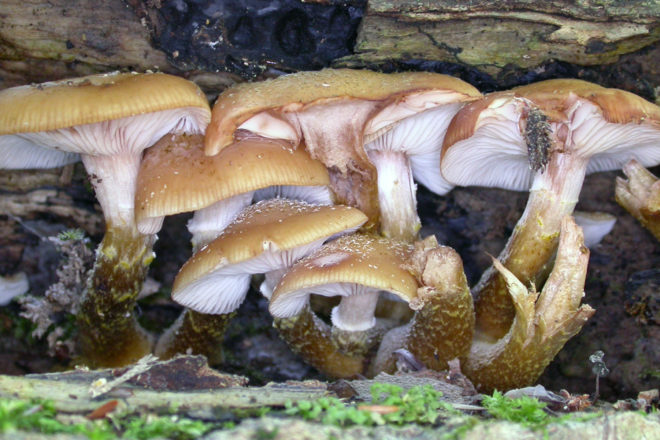 The honey cap mushrooms are difficult to identify because they can be so variable in their appearance. Photo by Roy Lukes.

The spotty light showers that sprinkled Northern Door this past summer had not been enough to bring out the wild mushrooms, but now that has changed with the more substantial rains of September. The longer the earth dries out, the greater the need is for large amounts of rain in each storm. That brings the mycelium, the actual vegetative part of the fungus, back to life and more rain will help produce the mushrooms.

My wife Charlotte has seriously pursued mycology, the study of fungi, for the past 44 years and likes to quote a favorite saying of the North American Mycological Association (NAMA) to which she belongs: “Mushrooms, a world of wonder at your feet!”

The rain surely has helped not only the farmers, fruit growers and gardeners but also those whose autumns are never complete without good harvests of edible fungi. The precipitation has also brought relief to those hikers, whose outings are greatly enhanced by dozens of different species of mushrooms, adding color and interest to the forest floor as wildflowers do in spring.

Autumn is by far the best time to search for wild mushrooms. They cannot make their own food and must find nourishment from other sources. The abundance of fall mushrooms is due to the fact that as the growing season wanes the fungi take advantage of all that nutrient supply and will produce lots of “fruiting bodies.”

The mushroom can be compared to an apple on a tree. The tree is the growing plant and the apple is the fruit, the reproductive part containing seeds. In the fungus world mycelium is the growing vegetative part of the plant and the mushroom is the reproductive part. However, instead of seeds the mushroom contains microscopic spores. These single-celled structures are released from the fruiting body once it is mature.

Most people are familiar with the typical mushroom purchased in the grocery store. It has a cap and a short stem and gills that are found on the cap’s underside. Millions of spores are carried on the faces of these plate-like gills and are released by gravity once the stem grows tall and the cap opens.

One of the steps in trying to learn the identity of a wild mushroom is to determine where the spores are being formed. On the typical cap and stem gilled mushroom they are formed on the gills. The entire reason for the mushroom structure is to lift the cap high, let it open to expose the gills to the wind and then gravity takes over as the spores are dropped and blown to new areas.

The color of the spores in a mass deposit is important in trying to learn the species. You can cut off the cap, place it gills down on a piece of plain white paper and cover it with perhaps an inverted glass or cottage cheese container. Let it remain undisturbed for several hours or overnight. Then gently lift the cover and the mushroom cap to see a “fingerprint” of the gills. A great quantity of spores should have dropped to reveal the color.

My wife and I have hiked in most of the county’s parks and she keeps a record of which species has been found in each location. Her total species list for the county is now more than 550. It had been at 615 but many were deleted from a list of those found during The Clearing mushroom classes dating back to the 1950s and 1960 and which she has never seen.

Whitefish Dunes State Park has the most at 247 species. The main reason for the high number is that the park is close to home and she has been doing mushroom hikes and research there since 1990.

Bear in mind that it is illegal to pick mushrooms or any plant material from Wisconsin State Natural Areas. This does not include most state park property that is open to hiking. Some areas of state parks do have State Natural Areas and they are marked with signs. Charlotte, with her background and expertise with mushrooms, has been given special permission to collect judiciously in these areas only for the purpose of identification and to further the understanding of the natural history there. 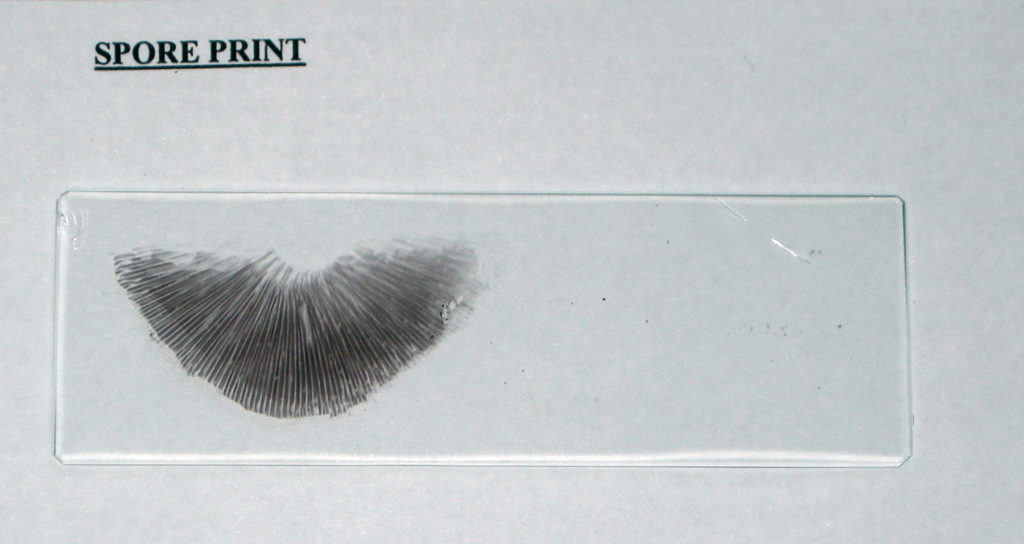 This microscope slide shows the black spores of a gilled mushroom. Photo by Charlotte Lukes.

Included among the various features in Charlotte’s accurate identification of the Door County fungi species to date has been the study of most using our high-power oil immersion lens microscope that also contains a measuring scale in the eyepiece.

The honey cap mushroom, Armillaria mellea, has smooth white oval spores that measure 7 to 11 by 4 to 6 microns. One micron is equal to one 125,000th of an inch. The cap has a granular coating on top and white gills that curve down the tough rigid stem. Its color can vary so much that the experts say it is one of the more difficult fungi to identify in the field. They tend to grow on trees but can also develop on the roots of trees. This is the species that was sought after each fall by my dad in the woods around Kewaunee.

Many people wouldn’t think of eating a wild mushroom, preferring to limit their association with this mysterious and fascinating group of plants to their pure aesthetic value. At the other end of the scale are those folks who are so eager to eat wild mushrooms that they would be willing to trust our identification from their descriptions over the phone. These same people will pay high fees to a doctor or lawyer for professional counsel, yet they expect free advice from us regarding wild mushrooms, a food that could mean life or death!

Buy and read from cover to cover a good recently published field guide for your part of the country and learn which mushrooms are poisonous. Spend some time carefully studying and learning the basic methods of observing and collecting mushrooms for proper identification.

There are two major reasons that cause people to be poisoned by eating wild mushrooms. Those are ignorance and carelessness.

Get out and hike the trails and enjoy the fall colors, including the great variety of wild mushrooms!