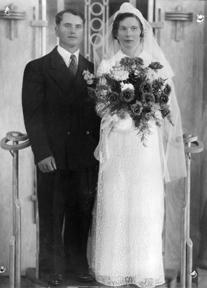 Arthur and Lucy (Wagner) Schleicher will be highlighted in Kelsey Schleicher’s presentation for the Jacksonport Historical Society.

Join the Jacksonport Historical Society on August 26, 2009 at 7 pm for a discussion on the Schleicher family. The event will be held at the Jacksonport Town Hall on County Road V. The event is open to the public, and refreshments will be served.

Rudolph Schleicher was born in Alverwhich, Germany, and he married Catherina Lautenbach, also of Germany. They came to America in August 1889 and arrived at the Port of New York in New York City on a vessel containing hundreds of immigrants. Rudolph received citizenship to the United States in October of that same year in the Door County Circuit Court.

Catherina and Rudolph had six children, and one of those children, Arthur, went on to marry Lucy Wagner of Jacksonport in September 1939. Together, they had eight children:  Arnold, Darrel, Catherine, Joyce, Willard (Bill), James, Mary, and Julian (Fritz).

Arthur died as a result of an accident in the woods and left eight school-aged children at home with Lucy. As an interesting side note to this family, Lucy was one of the first people in Door County to have open-heart surgery. Kelsey Schleicher, daughter of Bill, will reminisce with friends and relatives as she tells of the Schleicher family legacy.