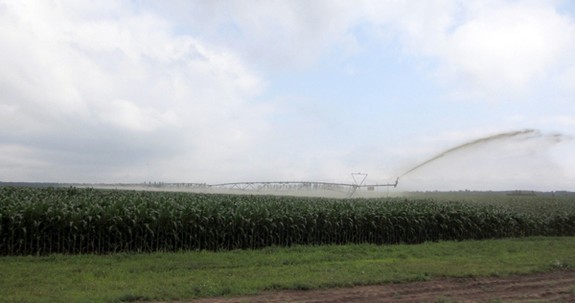 Spray irrigation systems like this one have been banned in many communities, but scientists and regulators say such bans may be premature, and ultimately, have little impact on public health.

When it comes to groundwater safety, a lot of energy is used to point fingers to assign blame for problems, and too little to identify solutions.

We talked to scientists, legislators, farmers and regulators to find out what options there are for reducing contamination of the peninsula’s aquifer. For some, the priority is water quality above all else, but others seek solutions that balance groundwater preservation against political and economic pressures.

A Moratorium on CAFOs

Environmentalists have called for a moratorium on Confined Animal Feeding Operations, or CAFOs, and on the extreme end, a dismantling of existing CAFOs. But Maureen Muldoon, an associate professor of hydrogeology and environmental geology at the University of Wisconsin – Oshkosh, who has studied the groundwater of Northeastern Wisconsin for nearly 30 years, said that wouldn’t come close to solving the problem.

“In the late 1980s and early 1990s, there weren’t CAFOs, and there were a lot of problems,” she explained. “So it’s not just big farms versus little farms. Little farms spread manure too.”

“When you have a well at your house, and you live one to two miles upfield of a farm, your well doesn’t care whether the water comes from a large farm or a small farm,” he said. 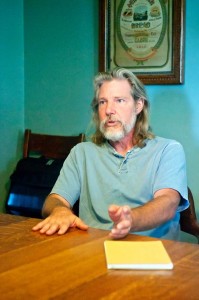 Lynn Utesch of Kewaunee CARES says that CAFOs aren’t the only groundwater risk, but they pose particularly big risks when things go wrong.

Lynn Utesch, a small farmer who is also co-founder of the group Kewaunee CARES, agrees that limiting CAFOs won’t solve the problem, but it would mitigate risk of an outbreak.

“When things do go wrong on a CAFO, the consequences can be disastrous for neighbors,” he said. “The CAFOs, because of their size and concentration, they have a greater potential to cause damage. They have to store six months of manure, and haul a lot of manure greater distances to spread it, which puts you at greater risk for large spills.”

Utesch believes regulators and policymakers are looking at the issue backwards.

“We need to not look at it like a cap for the farms, but a cap for our land and our soil,” Utesch says. “Our practices need to be held at a point where we’re not polluting our groundwater. In Kewaunee we have in excess of more than a million pounds of nitrates and phosphorous. We’re already beyond saturated. Nutrient management plans are not designed to protect groundwater, but are meant to maximize yield and profits for farms.”

Manure spraying has received a lot of attention of late as communities throughout Door County have banned the practice, though scientists said the bans may not accomplish much.

Muldoon said manure spraying may prove less of a risk than traditional spreading for several reasons. For one, sunlight may kill many of the viruses in the manure when it’s sprayed, rather than having them sit in the soil. Spraying also allows farmers to apply the manure throughout the summer and fall, rather than only in large amounts in spring and late fall. This means they aren’t applying huge doses of nitrates on the ground during the most vulnerable periods for the soil and groundwater.

Mark Borchardt, a microbiologist with the U.S. Dairy Forage Research Center, was surprised the bans were enacted so quickly.

“The studies aren’t out yet,” he said. “The primary concern has been airborne transmission of disease.”

Initial studies, he said, have found that the risk of airborne transmission of disease is less than what is considered acceptable for swimming. The acceptable risk of infection for swimming is 32 illnesses per 1,000 swimmers. For drinking water, it’s 1 illness per 10,000 people per year. Risk estimates for manure spraying falls in the middle, Borchardt said.

Determining risk, the scientists say, is much different than determining the acceptable level. “Society generally accepts conventional manure spreading,” Borchardt said. “Now, manure spraying smells really awful, and we may not accept that.”

Schuster said the focus on spraying diverts attention from the true problem. “It’s not really how we get it out on the field,” he said. “It’s when we do it, and how we keep it where it’s put.” 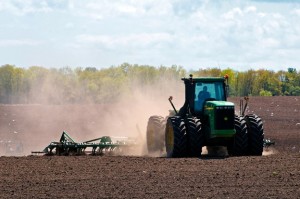 Banning liquid manure spreading through winter months helps prevent the manure from leaking off of fields or saturating soils in melts.

That’s because the water tables recharge in early spring as the snow melts. In deeper soils, pathogens get filtered as the water makes its way through soil and sands, but on the Door Peninsula, the soil is too shallow and the karst bedrock too permeable to filter thoroughly. If manure is spread on fields already saturated with melt, or deluged with spring rains, it will run into nearby streams and lakes or simply seep unfiltered into the aquifer.

“If you have 50 feet of sand, you’ll filter pathogens out,” Muldoon said. “If you have three feet of soil, and an aquifer with big cracks, that looks like a superhighway for bacteria, there’s virtually no filter.”

But date limits for spreading create problems too.

“I had one farmer warn me that if you set a date limit, then the day after that limit, everyone will race out to spread at once,” Muldoon said. “If that happens to coincide with a rain event, you can envision a large outbreak fairly easily.”

After 257 people became ill when a new septic system at the Log Den restaurant leaked in 2007, many people living nearby the restaurant installed ultraviolet water treatment systems in their wells to ensure clean drinking water. The systems range in price from a few hundred dollars to several thousand dollars.

Borchardt said that may end up being the norm for people who live in agricultural areas.

“Some people are buying bottled water, or putting treatment systems in their homes. At some point, we may say that’s all we’re going to do,” he said. 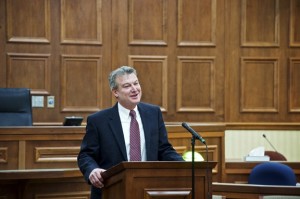 Assemblyman Joel Kitchens has heard an earful from property owners whose wells have been contaminated.

Borchardt is not advocating for that solution, but as a scientist who has studied water quality in Wisconsin for three decades, he knows how little will there is to make drastic policy changes. Rather than force changes on a powerful industry crucial to the state’s economy, it’s more likely that government and regulators will ask individuals to adapt to life with contaminated water.

“The long-term solution is basically going to be treatment plants,” he said. “The technology is improving rapidly, and hopefully within two years it will be viable. If we can get more of the big farms to invest in that, possibly with low-cost loans, they could even handle the manure for the smaller farms.”

For years, rural Wisconsinites were accustomed to seasonal fluctuations in water quality. They didn’t have science to turn to, but they didn’t drink the water when it ran brown.

“What’s changing,” Muldoon said, “is that in the ’60s and ’70s you primarily had farm families in the area, and you knew that in the spring melt you were going to have runoff. You didn’t drink the water, you took laundry elsewhere. Now we have a lot more new people. People who don’t know when things are happening around them. People who’ve lived in the cities and have a different expectation.”

Muldoon says that’s not wrong, but one of the factors in the problem is the change in a community from a largely agricultural makeup to one where new homes dot former farm fields and woods.

The Lysne family, which fell ill after drinking water contaminated by manure spreading in Jacksonport last September, presents a vexing problem. The water they drank did not smell or give any indication of contamination, and few would have thought to worry about drinking water in September.

“Your water can be contaminated and it can look perfectly good and have no smell,” said Rhonda Kolberg, head of the Door County Public Health Department. “People should have their well tested at least annually. But that’s only a snapshot in time. You may have problems depending on rain, time of year. Weather makes a big difference.”

Borchardt aims to develop an early warning system for homeowners to know when their water is at risk, with monitoring around the county that would alert people to a rise in contamination.

A similar system was instituted at beaches countywide after 68 people fell ill at Nicolet Beach in 2002.

Utesch is advocating for what he calls common sense ideas, including:

• Recreating the hedgerows around fields that used to keep groundwater from running into ditches and streams.

• Reverting to more crop rotation to build stronger soils that can hold up better against rain events. “So many fields today don’t have cover crops like alfalfa that are put there for several years to hold nutrients in place,” he said.

• Elimination of tile lines, the perforated pipes that farmers put into soil to help drain water into ditch lines or directly into waterways.

• Banning liquid manure, which makes nutrients soluble and much easier to drain into the aquifer.