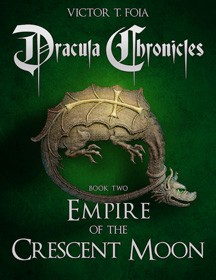 Local author Victor T. Foia announces the publication of the second installment in the seven-volume Dracula Chronicles series, Empire of the Crescent Moon, available in both paperback and Kindle editions on Amazon.

Readers who prefer to read the book on an iPad, iPhone, or other eReader, can download a free Kindle app from the Apple App Store. Those who would like to own autographed first edition paperback copies, may order them from the Dracula Chronicles eStore, dracula-chronicles.mybigcommerce.com.