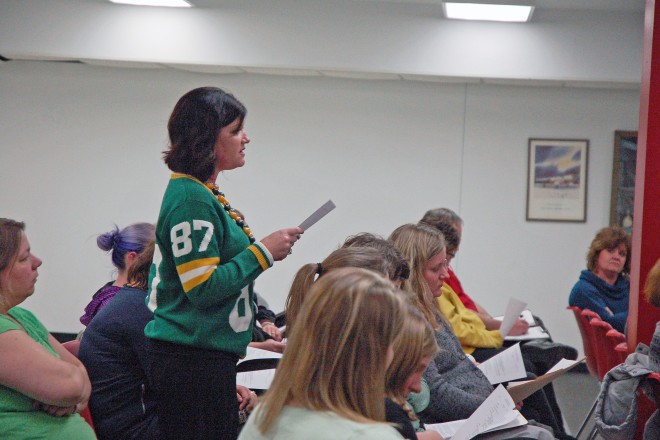 Parents and Sevastopol Elementary School teachers spoke in heartfelt support of renewing Elementary Principal Mary Donaldson’s contract at the Jan. 7 school board meeting, but the board voted 6-1 not to renew her contract, which expires June 2017. Lisa Bieri was the lone no vote.

Donaldson joined Sevastopol after the retirement of former Principal Joe Majeski at the end of the 2012-13 school year. She also serves as director of special education at the school.

The first speaker, Tim Bley, a parent of two Sevastopol students and husband of a Sevastopol elementary teacher, told the board that a campaign to remove Donaldson had been started on Facebook, but he was there to support her retention as principal.

He said it would be “heartbreaking” to lose a principal who has shown the love and compassion that Donaldson has shown for the children and teachers in her charge.

“I hope you all can see what’s going on here and won’t have a closed mind,” he told the board members. “If you want the truth, you need to have your ears open and maybe interview each teacher individually because there have been a lot of letters given to [Sevastopol School District Superintendent] Linda Underwood that goes missing.”

Second grade teacher Brooke Tanck said a parent volunteer posted an anti-Donaldson petition online on Dec. 18. She said while the post has not gained any momentum, “We as a staff are concerned. We feel we need to share our perspective of what is really happening inside these walls.

“We were in no way pressured to talk about this or even asked to do this,” Tanck continued. “In our own free will, we personally made the decision to write letters and sign the petition and stand here tonight in hopes that any questioning of our principal’s leadership would be extinguished and the board sees how much we respect Mary Donaldson.”

Tanck finished by saying, “Mary has quickly become the heart of this school.”

Several other teachers spoke in favor of Donaldson, including 2nd grade teacher Katie Grooters, who cited a satiric article called “6 Steps to Exterminating Innovation” in the magazine Technology & Learning, in which author Carl Hooker writers that “Innovation is an annoying pest. It infects organizations and makes people uneasy because it’s usually accompanied by a disease called ‘change.’”

“Mary’s leadership style is different from others and that doesn’t make it wrong,” Grooters said.

After naming the six steps to exterminating innovation – rule with fear, micromanage and control, don’t provide support, don’t allow sharing, cut corners and focusing on the negative – Grooters said, “Mary doesn’t exterminate innovation, but in contrast, she is the picture of innovation.” 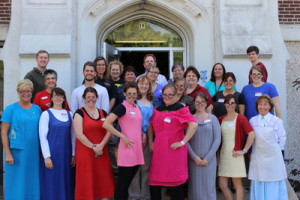 For superhero day during the 2014-15 school year, elementary teachers dressed up like their hero, elementary Principal Mary Donaldson, who is pictured at lower left. Photo from the Sevastopol School website.

Sevastopol graduate, parent of three Sevastopol students and substitute teacher Jennifer Kacmarynski was the last person to speak in the public comment forum. She and several other members of the audience became teary-eyed as she told about the apprehension her family had about moving from a school of 600 children in Akron, Ohio, to Sevastopol two years ago. She said Donaldson called her in Ohio to reassure her that her children would thrive in the family environment at Sevastopol.

She also talked about her daughter, now a 5th grader, who was born without a right hand and who did not want to leave her comfort zone in Ohio.

“She (Donaldson) made us feel welcome and helped Ella out of her comfort zone,” Kacmarynski said, adding that her daughter now plays point guard on the basketball team.

“I can almost burst thinking of how much confidence that girl has learned from Mrs. Donaldson,” she said.

In a telephone call, School Board President Sue Todey refused to discuss the “personnel” matter and referred the caller to the school board minutes. A call to Superintendent Underwood was not returned.