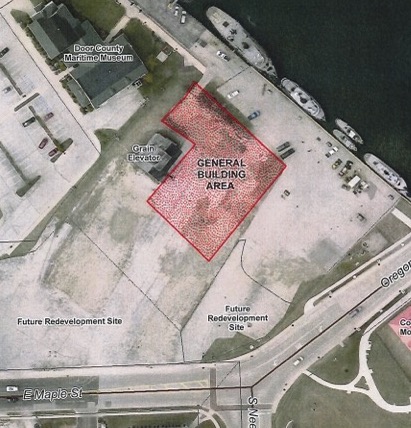 This drawing depicts how the Bay of Green Bay National Estuarine Research Reserve visitor center could be located on Sturgeon Bay’s West Waterfront, next to the Door County Granary project. Submitted.

Now that a development project on Sturgeon Bay’s West Waterfront is no longer proceeding, a fourth city-owned site has been added to the offerings to attract the Bay of Green Bay National Estuarine Research Reserve (NERR) visitor center to Sturgeon Bay.

In his report to the Sturgeon Bay Common Council, community development director Marty Olejniczak said the area on the West Waterfront northeast and southeast of the Door County Granary had previously been restricted because of the development agreement between the city and WWP Development. That company – owned by Peter Gentry, founder of One Barrel Brewing Company – had planned to construct a mixed-use building called the Sturgeon Bay Terrace with a beer taproom and deli at the location, but WWP Development recently informed city staff that the project will no longer happen.

The Sturgeon Bay Common Council approved a recommendation Jan. 3 to list the West Waterfront park area as another potential site in the prospectus being prepared by the city’s Ad Hoc NERR Advisory Committee to attract the visitor center.

The West Waterfront now joins the three other city-owned sites that have been identified as possible locations for the visitor center: Sawyer Park, Sunset Park and at the foot of Nautical Drive.

Laurel Hauser, SBHSF board president and a member of the city’s ad hoc committee, said she supported the inclusion of the West Waterfront site and looked forward to the ways in which the Door County Granary could partner with the NERR.

“It would add up to more than the sum of its parts and be something that would add value to all of the entities involved,” she said.

“I think it’s a great location to get the knowledge of the NERR out,” said District 4 alder Spencer Gustafson.

“I think this is the best location that I’ve seen,” he said. “Hopefully it works for us.”

District 7 alder Kirsten Reeths said the West Waterfront “would be an awesome site for the NERR. I believe it would put Sturgeon Bay even more on the map. It’s in our entertainment district. People could walk around, go in there and visit.”

The Bay of Green Bay region is being established as the 31st NERR in the United States. The 30 existing reserves were established through the Coastal Management Zone Act and are partnerships between the National Oceanic and Atmospheric Administration (NOAA) and coastal states.

Sturgeon Bay is one of three natural areas recommended for the NERR, along with areas in Peshtigo and the Lower Bay of Green Bay. The designation of those natural areas is a separate step from selecting the visitor-center site, however, which will take place over the next two years, according to the NERR project timeline.