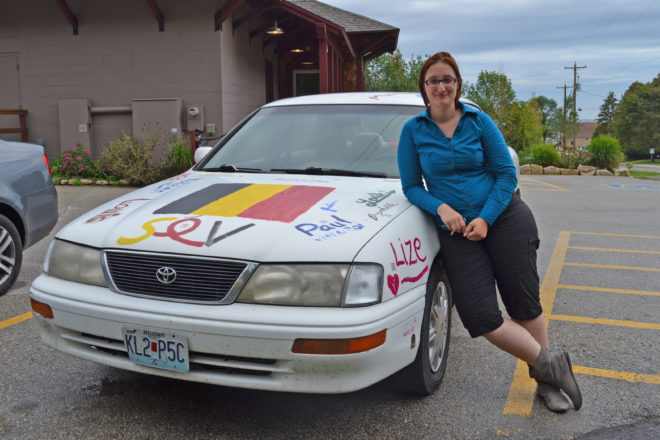 Before making her way south to a picnic hosted by the Belgian American Club of Chicago, Séverine Dehon made her way north to try some of the Belgian-inspired beers at Door County Brewing Co.

On the list of reasons to immigrate to the United States, Séverine Dehon’s isn’t all that uncommon. “Once upon a time, there was a man,” the Belgian explained. “Then I stayed anyway.”

What is uncommon is the way she decided to confront the series of unexpected and unfortunate events that quickly followed her 2011 arrival to Kansas City, Missouri, chief among them being culture shock and divorce, with a heavy dose of homesickness.

In search of an online immigrant community, and coming up nearly empty-handed, Dehon started writing a blog focused on specific problems faced by international immigrants who decide to stay permanently in the United States – dealing with family illness when abroad, making friends, making a home (“hardcore, depressing subjects,” as she explained).

In the process, she happened upon various online Belgian groups and their experiences, prompting her to pull away from her own upheaval to focus on the larger immigrant community.

“I started to do calls for interviews because I knew there was more to the United States than everything I had gone through. I knew there were good things. I knew it was the land of opportunity and I didn’t have the right opportunity to enjoy my position,” she explained. “I started to interview Belgians that had been here for a longer time, 10 years, 15 years, because every story I heard helped me outgrow one of my challenges. Every Belgian I interviewed, I asked: if you had one advice to give to a Belgian moving to the U.S., what would it be? The advice ranged from stop comparing all the time to Belgium, focus on the present moment or you don’t need your parents’ permission to start your own life. Everybody had their own advice.”

In 2014, Dehon began posting these interviews on her blog, “SeverineInKC,” and with each interview, requested a photo of her subject. The “crappy pictures” she received inspired her to hop in her first car – a white 1997 Toyota Avalon that she bought in 2012 with an odometer that read 200,000 miles – and travel to meet these subjects for in-person interviews and photos.

What transpired next would mark the beginning of Dehon’s transformation from timid international newcomer to a voice exploring the identity and challenges of Belgians living in the U.S.

And it was all thanks to a few tubes of paint.

“There was a soccer World Cup between the U.S. and Belgium,” Dehon said, referring to the July 2014 match in which her home country’s team eliminated the United States’ men’s team. “At my work, I was the only non-U.S. national so everybody was teasing me because I was part of the other team. It’s a very old car so I had this paint that I thought would be removable and I decided to show up at work with Belgian makeup, a Belgian flag as a cape, obnoxiously Belgian, and I decided to doodle on my car a gigantic Belgian flag that you see thinking it would go away, that it would just be temporary (laughs). I spent so much time with the car washer trying to take it off and the flag would not come off.”

It was three days before Independence Day, when Dehon hoped to show her friends how proud she was to live in America (“I had 6,000 American flags at my home!”) but alas, the Belgian flag remained.

So she addressed her “distasteful” mistake the only way she knew how, by adopting the French theory on taking ownership of a mistake: by “signing” her action, literally.

“I painted my name,” she said. “And it was so much fun to doodle on that old car!”

By that time, she was familiar with the endless amount of legal paperwork necessary to photograph individuals. When she secured her next interview (with a Belgian named Katrien from Missouri), she proposed replacing those legal waivers with her car.

“In Belgium you don’t have to cover yourself legally for everything you do so it was an inside joke that with somebody who I interviewed that I got really along with, I would say, hey instead of signing my waiver, why don’t you sign my car?” Dehon recalled.

“When I saw Katrien’s joy and her daughter and her husband and even the neighbors watching her sign the car, how everybody lights up with this bright, colorful old Toyota that should have been dead 10 years ago, it made everybody joyful. I thought, this is it! I have my concept.” 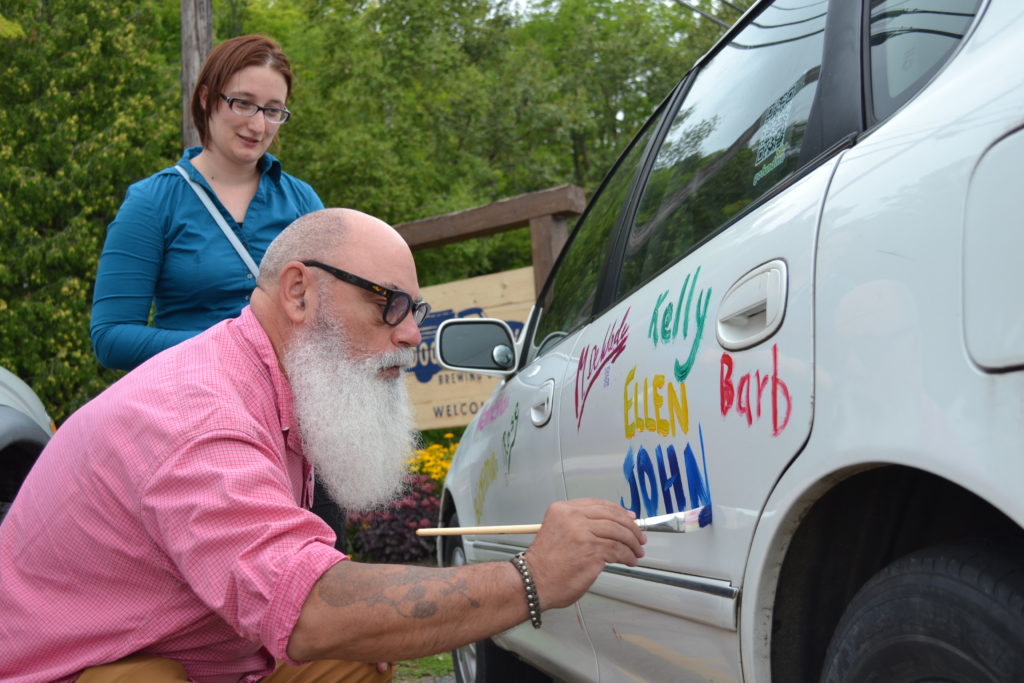 Door County Brewing Co. owner John McMahon signs his name on Séverine Dehon’s storytelling car. Each signature is accompanied by a QR code that brings smartphone users directly to the story of the person behind the signature.

In the two years since, she quit her job and has traveled 11,000 miles through 18 states on her Belgian storytelling tour, SignMyCar! The project employs various media – video, photo, web – to tell the stories of everyday Belgians living in America.

“Since I went through so much pain in the U.S., I wanted to do something as big. I call that ‘recycle the pain,’” she explained. “I wanted to do something as big and as crazy and I really wanted to move to Belgium but not until after doing something big because I was still very homesick. I thought, America is really amazing for a few years but it’s not home. I don’t belong. But I still wanted to have as much joy as pain to break even. But in the process of it, I became more and more American. I realized the United States grows on you, if you let it.”

In August, Dehon added Door County to that tour with a visit to the Belgian Heritage Center’s annual Kermiss. The visit infused new energy to the project, giving Dehon the opportunity to interview Americans of Belgian ancestry about how they preserve their heritage.

What surprised her most was discovering that the Belgian heritage the center is preserving (including the Walloon language) is not the same Belgium she knows, chalking it up to a distant relationship between her parents and grandparents, and changing traditions.

“It’s really cool for me to discover kind of like a time capsule of Belgium through Wisconsin,” she said. “They moved but they never returned. Their Belgium is like my grandmother’s and my great-grandmother’s … it was very insightful. Most of the time Americans go back to Belgium to learn the history and for me, it’s reverse.

“Walloon is almost not spoken in Wallonia anymore and it was nice to hear Walloon for the first time, too,” she added.

The Belgian Heritage Center will be the focal point of a series of articles Dehon will add to her website, SignMyCar.org. She expects to complete her journey across the United States by 2019 and has started a GoFundMe Campaign to support her mission of building bridges among cultures by promoting respect and compassion.

And by next January, she’ll be doing that in a slightly new way: as an American.

“I went from being an obnoxious Belgian who had the wrong attitude who was homesick to, I applied for dual citizenship last week,” Dehon said.

For more on SignMyCar! visit SignMyCar.org or email Dehon at [email protected]