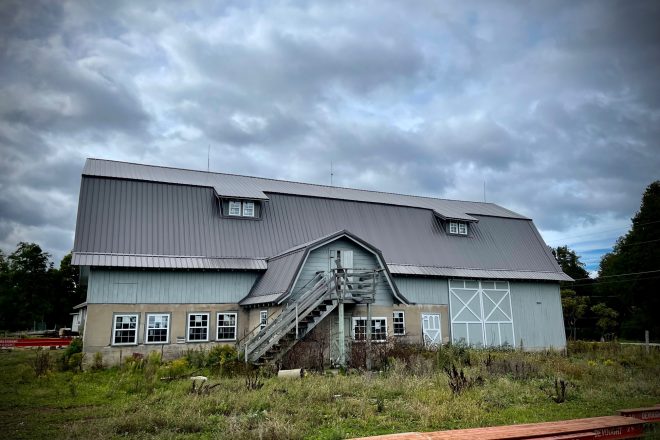 The Sister Bay Historical Society is raising funds to move and rehabilitate this 1919 barn to serve as its new history center. File photo by Myles Dannhausen Jr.

The Village of Sister Bay approved up to $25,000 in matching funds during its Nov. 9 meeting to help the Sister Bay Historical Society complete a preservation project. The society aims to move a historical barn from the former Little Sister Resort property to the society’s grounds on the corner of Highway 57 and Country Lane.

The society said it hopes to obtain a grant to fund up to 75% of the cost of the move, but that would leave the organization $45,000 short of what it needs. Trustee Nate Bell proposed the matching funds to help the Sister Bay Historical Society close the gap.

The barn would move across the former Bay Ridge Golf Course property to Country Lane, along with two other structures.

Trustee Chad Kodanko applauded the historical society for its work.

“It really is exciting to see how far you guys have come in a short amount of time,” Kodanko said.

The historical society hopes to move the barn in early December.

Also Nov. 9, after seven months of negotiations, the village reached an agreement with the Sister Bay Advancement Association to fund the organization in 2022. The village had previously budgeted $109,000 for SBAA, but it has been waiting for clarity from Destination Door County (DDC) about how much that organization would be providing to help fund community associations now that the municipalities have agreed to raise the room-tax rate to 8%.

President Rob Zoschke and trustee Pat Duffy pushed the village to send a letter to DDC requesting in writing specifically what the organization would be providing for community associations before deciding whether it would provide funding for SBAA. Discussion turned heated, and trustees shouted over each other at times.

“Let’s ask them to send us a letter to tell us what they’re going to get,” Duffy said in frustration. “A specific dollar amount.”

“I don’t understand why it’s such a difficult idea to see that it’s beneficial for Sister Bay and SBAA to have a letter that says what [Destination Door County] will be providing to SBAA specifically,” he said.

Trustees Denise Bhirdo, Nate Bell and Chad Kodanko agreed that the information should be provided, but they argued that the village should not leave SBAA in limbo as it awaits that commitment.

During its Nov. 9 budget meeting, DDC’s board of directors approved a budget that would send an estimated $122,000 to SBAA. After about an hour of contentious debate, the village board voted to fund the gap between the $153,000 budget proposed by SBAA and the amount provided by DDC up to $109,000. Duffy was the lone trustee to vote against the measure.