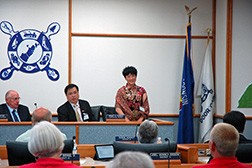 Two of the five delegates from Door County’s sister city Jingdezhen, China, sat at the raised seating with Door County Board of Supervisors Chair Dan Austad during a county board meeting held in their honor on July 14. At center is Xie Bing (Parker), who served as translator, and at right, Hu Xiaoyan, director of Jingdezhen’s No. 1 People’s Hospital. The three other Chinese representatives were seated with the county board members and are also associated with No. 1 People’s Hospital. During their two-day stay, the group visited medical facilities throughout the county, as well as attending a typical American BBQ and a Door County fish boil. The group returned to China on Thursday. Photo by Jim Lundstrom.