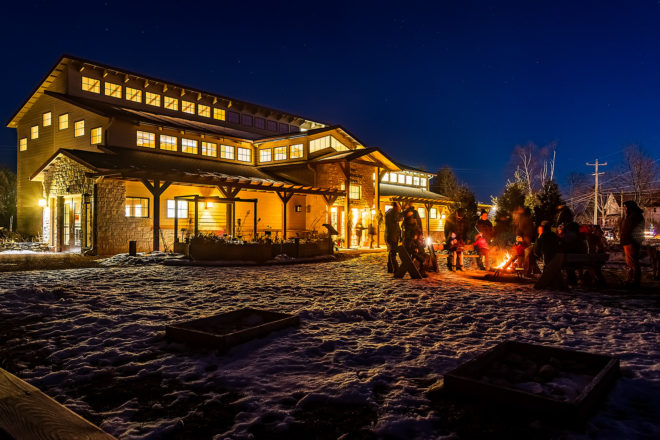 The Cook-Albert Fuller Center at the Ridges Sanctuary has broadened the center’s appeal. Photo by Len Villano.

The board members of The Ridges Sanctuary and Door County Land Trust have set a timetable for a decision on potentially merging the two nonprofit organizations. They are now targeting March for a decision after realizing that their initial November goal wasn’t realistic, said Ridges board president Linda Brooks.

“We realized we have a lot of material to go through, and without an executive director, those of us on The Ridges’ board are doing a lot of that work,” Brooks said. Longtime director Steve Leonard left the organization in May.

“We realized we hadn’t allowed ourselves enough time to do the work and allow time for thought, so we decided to take a few deep breaths and move to March first,” Brooks said.

Door County Land Trust board president Donna DeNardo said the slowdown gives the organizations a more realistic timeframe within which to work.

“This takes the pressure off of everyone in the process,” she said.

The merger decision is not an easy one for those leading The Ridges Sanctuary, an 83-year-old organization with 1,800 members and a storied history. The Ridges includes 1,600 acres of protected wetlands in Baileys Harbor, two lighthouses and the Cook-Albert Fuller Nature Center, which opened in 2015.

For much of its history, The Ridges Sanctuary flew somewhat under the radar, powered by dedicated volunteers who helped to maintain trails, build bridges and boardwalks, and welcome visitors to the grounds. With the opening of the Cook-Albert Fuller Nature Center, the sanctuary became much more visible in the community and began attracting many more visitors.

Brooks said the board has received mostly positive feedback since announcing the merger talks earlier this month, but some supporters fear that The Ridges could lose its identity in the merger. Brooks said its board is dedicated to ensuring that doesn’t happen.

“To the outside world, I don’t think it would look very different,” she said, noting that the sanctuary and nature center names would not change, but the mission would expand to more properties. “If this happens, we would try to do education and research on a wider range of properties, enhancing the work of The Ridges. The history doesn’t change.”

Brooks pointed to The Ridges Sanctuary’s 1937 articles of incorporation, which include among the stated purposes of the organization to “acquire and hold other pieces of real estate in Wisconsin and elsewhere, and to protect and preserve the native plant and animal life thereon.” Brooks sees the potential merger with the Door County Land Trust and its 14 preserves as a fulfillment of that purpose.

“We see it as expanding a good thing,” she said. “We would just have a different tax ID.”

The organizations have developed a concept paper that goes into more detail about how a merger could work and the questions that need to be answered to determine whether to move forward. That paper has been distributed to staff, board members and supporters, and it’s available to anyone on request.

“The [concept] paper will guide our joint investigation,” Brooks and DeNardo said in a joint letter to the Peninsula Pulse. “It presents a mission for the new organization, goals that would have to be achieved, a proposed governance structure and a commitment that the combination must preserve the identities, histories, traditions and volunteer engagement of both The Ridges and the Land Trust. That commitment is essential. Without it, our discussions would end, and without it, any future combination would fail.”

The process began in July, when the executive committees of the organizations began meeting to discuss a merger. The committees’ members defined a vision and identified issues before taking the idea to their respective boards for approval of a serious exploration, which was approved unanimously Aug. 27.

Brooks said information will be distributed regularly to members by email and mail as merger talks progress.

“We don’t intend to dump a lot of information on people right before a vote,” she said.