A Wisconsin Senate committee voted along party lines Tuesday to advance a bill that would eliminate all of Wisconsin’s state air pollution regulations. Under the proposal, the state Department of Natural Resources would have the option to reintroduce those regulations. All existing federal regulations would continue.

“All we’re asking is that our scientists at the DNR just take a look at all the things that they regulate above and beyond the EPA, and make sure that it still makes sense,” said Sen. Duey Stroebel, R-Saukville, one of the bill’s sponsors. “If it does, we’ll regulate it. If it doesn’t, based upon what the scientists say, we won’t.”

At a November public hearing on the bill, Stroebel and the bill’s Assembly sponsor, Rep. Jesse Kremer, R-Kewaskum, said they believe some of the state’s air regulations are unnecessary. They cited a 2004 report from the Legislature’s nonpartisan audit bureau that said the state regulates 293 more pollutants than required by federal law. Of those, the audit found 94 of the 293 were reported in Wisconsin in 2002.

The 3-2 vote Tuesday in the Senate’s government operations committee was along party lines, with all Democrats voting against it.

Sen. Robert Wirch, D-Somers, said the plan is part of a larger effort by Republicans to roll back environmental protections in Wisconsin. “This is just the latest chapter in it, weakening our air quality rules. I think that’s the wrong direction for our state,” Wirch said.

The bill has yet to be voted on in an Assembly committee.

Wisconsin lost 500 dairy farms in the last year, according to the latest numbers from the state Department of Agriculture, Trade and Consumer Protection.

There were 8,801 dairy herds licensed in Wisconsin as of Jan. 1, 2018. The number of dairies in the state has fallen more than 20 percent in the last five years. But milk production continues to grow every year as many commercial farms expand.

“The growth is really in the medium- to large-size dairy operations,” said Steven Deller, professor of agricultural and applied economics at the University of Wisconsin-Madison. “The growth in those sectors and the increase in productivity of being a bigger operation, the volume of milk is actually not being affected by this.”

Deller said it’s not profitable for dairy farms to operate on a small scale, so the number of commercial farms in the state is likely to continue to decline. Deller said when farms aren’t able to be profitable, they aren’t contributing to the local economy.

“Do you want to have 10 small farms that are producing poverty level jobs or income levels, or do you want to have one big farm that pays decent wages? From the point of view from the local economy, you want that one bigger operation,” Deller said.

Deller said a growing interest in local food and specialty crops like hops, means there are still other kinds of farming opportunities for small producers in the state.

In a press release from Walker’s office, the proposal is described as providing a “long-term solution for Wisconsin’s juvenile corrections and treatment systems.” The plan comes after “extensive” discussions with state, local and judicial system officials, and other stakeholders, according to the release.

“By moving from one facility to several facilities across the state, and placing a focus on mental health and trauma-informed care, we believe this plan will improve long-term outcomes for both juveniles and our staff working at these facilities,” Walker said in the release.

Lincoln Hills, north of Wausau, remains under a federal investigation into abuse of inmates by guards. In December, federal prosecutors informed two former guards at Wisconsin’s troubled youth prison that they are targets of an investigation into excessive use of force.

According to the Milwaukee Journal Sentinel, Walker’s proposal comes six years after a judge first notified his office of problems at the facility and six months after a federal judge placed restrictions on how the facility runs. 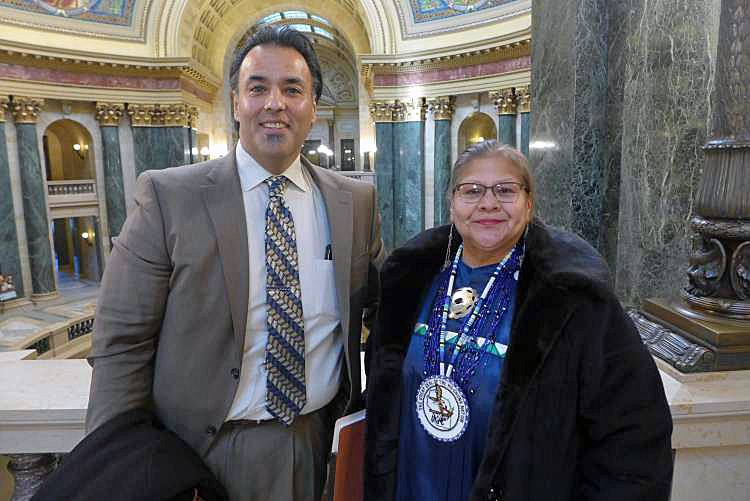 Jon Greendeer, left, stands with Kathy DeCamp, right, a legislator for the Ho-Chunk Nation, in the state Capitol. Photo by Shawn Johnson/WPR

Wisconsin would more clearly spell out protections for tribal burial sites under a measure making its way through the Legislature. The plan was prompted by another bill introduced two years ago that would have made it easier for landowners to excavate and potentially develop Indian mounds.

The Ho-Chunk Nation’s Jon Greendeer told state senators at a recent public hearing that after the original bill, tribal leaders learned many lawmakers did not realize mounds were sacred. “A lot of the people that had signed on to the original legislation actually felt like mounds were just piles of dirt,” Greendeer said.

This latest bill, which was written with the help of members of the public, would specify when the Wisconsin Historical Society can protect a burial site and when a landowner can challenge those decisions. It would also increase the setback around burial sites from 5 feet to 10 feet. The bill cleared the full Assembly on a voice vote in late November and had a hearing in a Senate committee last week.

While nobody has reported lobbying against the plan, Wingra Construction President Robert Shea opposed it when it was introduced, arguing it would give the state more power to unilaterally seize land. Shea was a driving force behind the original bill that would have given developers more power to excavate burial mounds.

AG Race Shaping Up to Be 2-Man Contest

While Democrats are lining up to challenge Gov. Scott Walker in November, the field of candidates running for Wisconsin attorney general is considerably smaller.

Democrat Josh Kaul registered his campaign for attorney general last April. So far, he’s the only one. Kaul is a Madison attorney and a former federal prosecutor. He’s hoping to defeat Republican Attorney General Brad Schimel.

“We need somebody who is going to stand up to fight for Wisconsin families rather than fighting for powerful special interests,” Kaul said in a recent interview.

More recently, Kaul was part of a team of attorneys who successfully challenged several Republican-authored voting restrictions in Wisconsin.

Former Attorney General Peg Lautenschlager, who is Kaul’s mother, was the last Democrat to run Wisconsin’s Department of Justice.

“I couldn’t be prouder of my mom,” Kaul said. “But this race is ultimately going to be about why I think I can do a better job as AG than Brad Schimel has.”

After the U.S. Olympic long-track speedskating trials wrapped up Sunday night in Milwaukee, a U.S. coach said he thinks the U.S. men’s and women’s teams can win medals at the Winter Games next month.

The optimism comes despite U.S. long-track speedskaters being shut out at the 2014 Olympics in Sochi, Russia.

But U.S. speedskating high performance director Guy Thibault said he was impressed with many of the speedskaters during the week of Olympic Trials at the Pettit National Ice Center in Milwaukee.

Thibault said multiple qualifiers like Joey Mantia, Shani Davis, Heather Bergsma and Brittany Bowe are particularly impressive. He said the biggest surprise of the Winter Trials was Erin Jackson qualifying in the 500-meter race Friday, becoming the first African-American on the women’s long-track speedskating team. Jackson has only been long-track speedskating for four months after switching from inline skating competitions.