Walker: A ‘Given’ That Pre-Existing Conditions Will Be Covered

Gov. Scott Walker said the state would continue to cover people with pre-existing conditions after leaving the door open last week to a change that would let insurance companies raise rates for those customers.

“It’s a given that people with pre-existing conditions are going to be covered here in the state of Wisconsin,” Walker told reporters in Milwaukee. “I’ve not changed in that position and people took it out of context.”

The health care bill passed by Republicans in the U.S. House of Representatives included a provision to let states seek waivers from the federal government to let insurers raise premiums for people with pre-existing conditions. The bill would also set aside $8 billion to help states that take the waiver offset the higher premiums. 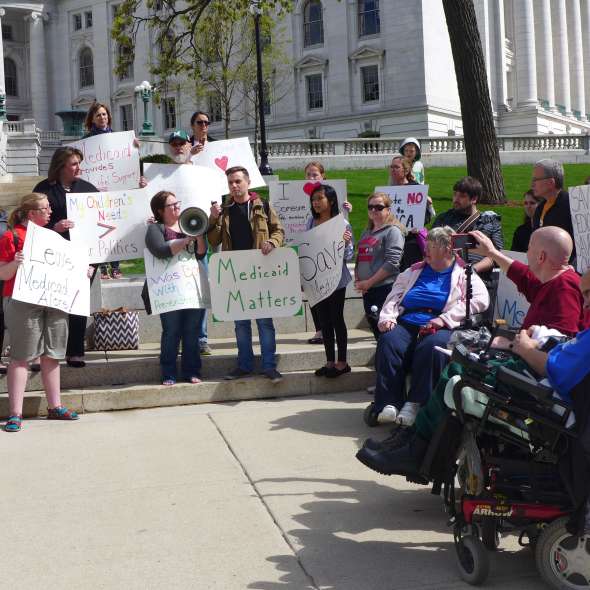 People gather outside the Wisconsin Capitol on Saturday, May 6, during a rally criticizing the American Health Care Act. Photo by Shamane Mills/WPR.

Disability advocates spoke outside the state Capitol on Saturday to criticize politicians for advancing cuts to Medicaid in the GOP health care bill that passed the House of Representatives.

The advocates who gathered said the fact the House narrowly passed a bill to repeal and replace the Affordable Care Act shows politicians aren’t listening to the concerns of voters.

The House bill, which is expected to be modified in the U.S. Senate, calls for more than $800 billion in cuts to Medicaid. Disability advocates say Wisconsin could lose $1 billion if the Senate agrees with the House version of the American Health Care Act.

About 24 adults and parents at the Capitol explained how the joint federal-state health program has improved their lives.

Pam Delap, of Oshkosh, said her 16-year-old son with autism is more independent because of services provided by Medicaid.

“Oshkosh Area School District received $860,000 last year through Medicaid to support students to get them the skills they need to work,” Delap said. “We’ve got a resource shortage in the workplace. Why are we not supporting this population that can be working?”

Gov. Scott Walker and Assembly Republicans remain at odds over transportation funding after Walker criticized their plan to increase taxes on gasoline to pay for roads.

“Call it what you will,” Walker said of the GOP plan. “If you’re paying more on the gas that you pay at the pump, that is a gas tax increase.”

The plan by Rep. Dale Kooyenga, R-Brookfield, would cut the state’s dedicated fuel tax, but it would more than make up for that cut by applying the state’s sales tax to gasoline. The Legislature’s nonpartisan budget office said the overall effect would be about a seven-cents-per-gallon increase on the average gallon of gas.

Overall, Walker said the plan would increase taxes by more than $430 million in the next two-year budget. His office said that number includes higher local sales taxes that would result from the proposal.

“And yet there are no new projects identified — road projects,” Walker said. “I think a lot of people sort of scratched their head and said, ‘I thought the whole debate was about having to have more road projects.’”

When most people think wine country, they think Napa Valley, France or Italy.

But Wisconsin? Not so much – at least not until recently. In the past few years, Wisconsin has started to become a tourist destination for wine lovers as the number and quality of wineries in the state have increased.

Alwyn Fitzgerald, president of the Wisconsin Winery Association and winemaker at Fisher King Winery in Verona, said he welcomes the change.

Having more wineries in Wisconsin “gives customers a choice and more range of things to try, and it brings more people in because it’s now even more of a destination for a cluster,” he said.

In 2000, Wisconsin had just 13 permitted wineries in the entire state. Now, there are upwards of 140, Fitzgerald said.

In 2015, there were nearly two million visits to wineries in Wisconsin, and an estimated nearly $50 million in direct spending on wine tourism.

A system of 16 locks runs between De Pere south to Appleton, covering more than 25 miles of the Fox River. Two locks will remain closed this season because of the invasive round goby, a fish that comes from Eurasia and is thought to have come to the United States in the ballast water of large ships as early as 1990.

The two locks are the The Rapide Croche and the Menasha.

The fish has been found in Little Lake Buttes Des Morts, which feeds into the Fox River that flows north to Green Bay and into Lake Michigan.

Despite the invasive fish and closed locks, there is some good news for boaters this season, said Bob Stark, CEO of Fox River Navigational Authority (FRNA), which oversees the locks.

“The locks in Little Chute have not been used in some 30 years, so they’ve been refurbished, and this will be the first time they’ve operated,” Stark said.

If the goby get further into the Lake Winnebago system, it could eventually infect 17 percent of the state’s inland waters, said DNR Fishery Supervisor Kendall Kampke.

Kampke said the Menasha lock closure is “unfortunate” because, “it’s also one of the busiest locks, because you have got Lake Winnebago as a destination for anything in the Appleton area. Those boats were using the Menasha lock on a regular basis.”

Stark said the FRNA is “adamant” about finding a way to get boats where they need to go.

Stark said the FRNA is also looking at other alternatives, such as “an electric barrier not unlike what’s being used at the Chicago Ship Canal to keep the big head carp from getting into Lake Michigan.” Stark said infusing water with carbon dioxide is also an option.