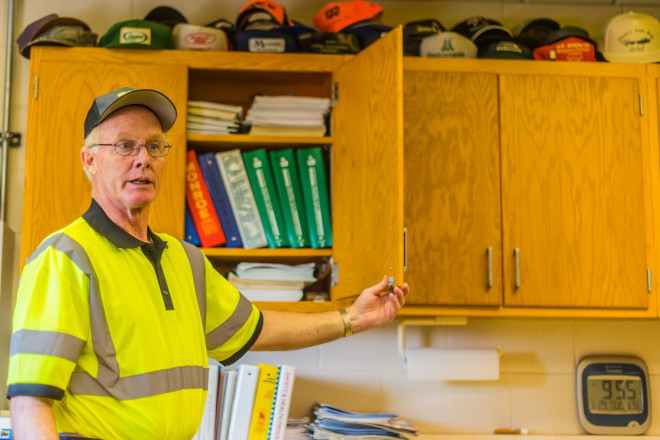 The “unofficial keeper of the history of public works” in Sister Bay retired this week after a 37-year career of ensuring that if you are hooked into the Sister Bay utilities that the water coming out of your taps is clean and that the waste you send out is properly treated.

“It’s been a wonderful career,” said Steve Jacobson. “We have both water and wastewater, so you’re managing both. It’s a challenging job but it’s interesting. You’re never bored. You have to deal with chemistry, physics, mechanics, electronics, customer service. And there are so many people, dealing with DNR, Public Service Commission, board members, and then being on the northern end, you have this big surge in the summertime and then you get to the quiet time in the winter to get all your projects done.”

The Sister Bay native joined his hometown utility in January 1979, hired away from the Green Bay Metropolitan Sewerage District, where he had worked since 1976. The village began discussing a municipal utility in 1964.

“They didn’t get it done until 1972. It took a while to get everybody on board,” Jacobson said.

The first plant was built in 1973, and Jacobson oversaw the building of the current plant in 1989.

“Over the years there’s always been dips in the economy,” he said. “Sister Bay has been fairly insulated by that because of its water system. Going back to the ’70s and forward, I think that’s true. While it’s a big expense to go through, I think Sister Bay did it right.”

When Jacobson joined the utility in 1979, he and a part-time employee served 200-some homes and businesses. He leaves the utility with four full-time operators and a utility clerk serving 800-some year-round residents in the Sister Bay-Liberty Grove utility district and approaching 3,500 customers in the summer.

“I’m not that convinced that everybody appreciates what they have with sewer and water,” Jacobson said. “As long as they turn the tap and it comes on or you flush it and it goes away, that’s all they think about it. But it’s the biggest expense in any community. If the operators in charge aren’t doing their jobs, you slowly get degradation and have big expenses or start having issues with discharge. I’ve had great staff and clerks over the years, and good boards to work with.”

Knowing that the village board is his boss, Jacobson said he always took a proactive approach by educating new board members.

“Board members are our bosses,” he said. “It’s our job to educate them so they know what to tell us to do. Any time there’s a board member elected, I contacted them. Come on out, take a look at what you own. We give them a tour of the plant, the wells, the water tower, the treatment plant. In many cases it’s overwhelming right at first. But at least when an issue comes up at the board level, there’s something at the back of their minds, ‘OK, I remember that.’ But it is a challenge for any operator to work with a constantly changing board. It’s your job to make recommendations to your board.”

And when the board doesn’t agree with recommendations?

“There is not always a clear-cut path,” he said. “If this is the path they’re going to go with, you jump on board and go with it. The only constant is that there is change. You adapt and move on.”

“Steve Jacobson has devoted 37 years of service to the village,” said Village Administrator Zeke Jackson. “I’ve only had the pleasure of working with him for three of those years, but in that time, I’ve known him to be incredibly dedicated, insightful and enterprising in his work. It’s a funny thing to say, but every time the citizens of Sister Bay have turned on the tap or taken a shower for the last 37 years, they’ve had him to thank for it. He’ll be missed at work, but still out and about in Northern Door making trouble wherever he can.”

Jacobson said he has mixed emotions about retirement.

“There’s that letting go thing after all these years,” he said.

But he is looking forward to being grandpa.

“We want to spend some time with kids down in Florida and Texas. And we have kids in the [Fox] Valley. During the winter we’ll be south and up here in the summer. I’ll be playing some golf and doing some fishing. I’ll be working for Maxwelton Braes [Golf Course in Baileys Harbor], maybe three days a week, help take care of my bad habit of golf. I’m sure the wife probably has some ideas for me, too.”

His wife, Sally, is office manager of the Ephraim Historical Foundation.

“He’s worked here 20-some years,” he said. “The village will be in good hands. And I’m not leaving town, if there are questions, I will be there.”