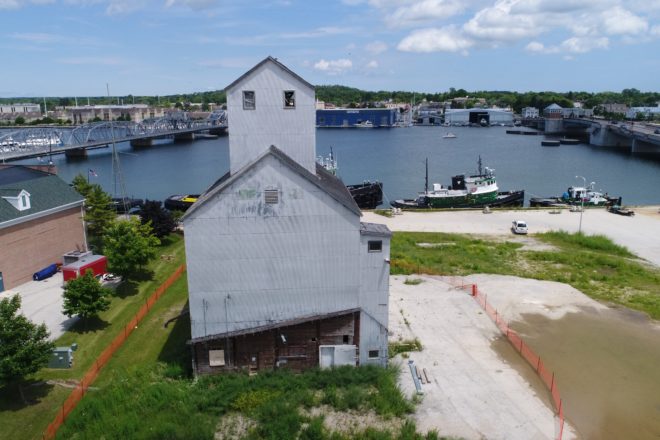 Two weeks after voting to give the Sturgeon Bay Historical Society (SBHS) 60 days to perform a structural analysis of the property on the city’s west waterfront, the common council changed course.

The city rejected pleas to save the historical structure, as well as nearly $1.5 million in private funds pledged to save the structure, when it voted 4 – 3 to approve the dismantling of the structure at its Nov. 21 meeting. The decision comes with the stipulation that the deconstruction be done in consultation with preservationists to save portions of the structure for possible reconstruction or repurposing. Those portions would be stored for up to one year for an organization to come up with a plan for the pieces.

Alderperson Kelly Catarozoli, an ardent supporter of saving the structure, was distraught by the decision.

“If you’re a resident, or a visitor, how do you not appreciate the history of Sturgeon Bay?” she said after the meeting. “The men up here, they grew up in this town and they hate their history. I don’t get it.”

The city had a bid for demolition for $53,000, but will now have to re-bid for dismantling and saving portions of the building. Alderman Stewart Fett, who ran the meeting in place of Mayor Thad Birmingham (Fett said Birmingham was dealing with a medical situation), said he did not know how quickly that bidding process would move or when deconstruction would begin.

City Administrator Josh Vanlieshout said a request for bids would likely go out next week, with the hope of having proposals for the council to review at its Dec. 5 meeting.

Before voting to demolish the structure, which dates to 1901, the council rejected a motion by Catarozoli to join the Sturgeon Bay Historical Society in its petition to remove the raze order issued by fire Chief Tim Dietman Oct. 17. Catarozoli, Barbara Allman, and Laurel Hauser voted in favor of that motion, while Richard Wiesner, Ron Vandertie, David Ward and Fett voted against it.

The final decision came after Fett motioned to approve demolition, with the option for preserving any aspects of the building to be paid for by the Sturgeon Bay Historical Society. That last portion of his motion was met with disbelief by the audience dominated by citizens seeking to save the structure. Ward quickly offered up the new motion that was eventually approved as a compromise.

Earlier in the meeting, structural engineer Dave Holton from the firm of Meyer, Borgman and Johnson, the firm the city hired to perform a structural analysis of the building in 2013, asked the council for an opportunity to inspect the building.

“I think we need to take another look at it,” Holton said. “We would appreciate the opportunity to look at it again and see how things have changed over the last four years.”

Pat Drury, a preservationist who has helped stabilize and renovate a granary in Ledgeview and who is a member of the board of directors of Heritage Hill State Historical Park in Green Bay, has been inside the structure and believes it can be saved. He has been working with SBHS, but said the city has not taken any steps to give the group access to the building to begin work on the structural analysis approved at its Nov. 7 meeting.

The original raze order gave the city until Nov. 17 to raze the structure or risk being cited by the Department of Safety and Professional Services for each day it is not taken down.

Fett said the city has been advised that it could be fined $1,000 for each day it doesn’t comply with the raze order. Vanlieshout said the city will contact the DSPS to seek time to finalize deconstruction bids and avoid penalties.

In August the council voted to tear down the granary with the stipulation that those interested in saving the structure would have until Jan. 1 to come to the city with proposals for rehabilitative use for the structure, and more importantly, funds for stabilization.

Later that month the granary was added to the Wisconsin Register of Historic Places. Then in October Dietman ordered the structure be razed within 30 days due to concerns for public safety based on a complaint made by a citizen and evaluations by Dietman and city staff. The city has not released any information on what those evaluations revealed.

On Oct. 26 the Sturgeon Bay Historical Society announced that an anonymous donor had come forward with a $1.25 million gift to stabilize and rehabilitate the property at no cost to the city. The pledge stipulated that if an analysis determined the building was not structurally sound, the donor would pay for demolition. Additional donors followed suit, but those donations did not sway Aldermen Fett, Wiesner, Ward, Vandertie, or Mayor Birmingham, who said that the overwhelming response from their constituents is that the council tear down the granary.

In 2013, Meyer, Borgman, and Johnson performed a detailed structural analysis of the building and determined it was a great candidate for repurposing. The city included it as a centerpiece of its west waterfront redevelopment plan and sought developers to invest in it, but at least one potential brewery developer deemed rehabilitation too costly and asked the city to kick in substantial funds.

Hauser, another proponent for saving the granary, said that as long as the building is still standing she’s not giving up the fight.