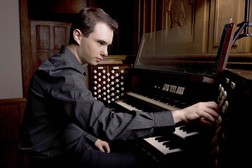 Among a new generation of American organists Christopher Houlihan is widely acknowledged as one of its brightest stars. On July 29 at 7 pm, Houlihan will make his premier visit to Door County to present a concert of organ masterworks at Shepherd of the Bay Lutheran Church in Ellison Bay.

The 24-year-old Houlihan studied in France during his junior year of college and earned the “Prix de Perfectionnement” (equivalent to a university artists’ diploma in the U.S.) from the French National Regional Conservatory in Versailles. After graduating from Trinity College, Houlihan studied at Juilliard School with the Grammy Award-winning virtuoso Paul Jacobs. For more information about Houlihan visit http://www.christopherhoulihan.com.

The concert is free, but a free-will offering will be taken to benefit future musical events at Shepherd of the Bay. All are invited to greet the performer at a reception following the concert.

Shepherd of the Bay Lutheran Church is located on Highway 42 between Sister Bay and Ellison Bay. For more information call 920.854.2988.