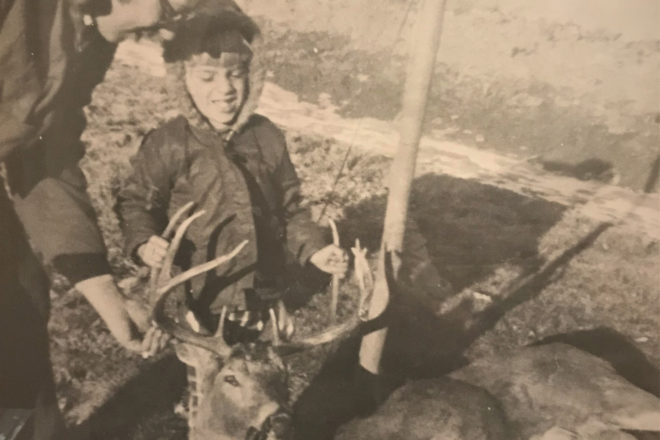 The author, Jim “J.B.” Sensenbrenner, with his son Jamie and a 10-point buck. Submitted.

Few endeavors lend themselves better to storytelling – and in some instances, embellishment – than fishing and hunting.

Jim “J.B.” Sensenbrenner of Appleton, a part-time Door County resident, certainly thinks so. He also felt that all of us reluctant shut-ins could use a good yarn or two, which is why he’s compiled his favorite tales from the trails into a new book, The Love of Hunting. Writing the book was a way, he said, to get back to storytelling, the way hunting began.

“You go out into the woods, and then you come back and share your experience,” Sensenbrenner said. “I just wanted to throw that out there during this crazy pandemic year. Let’s [provide] some storytelling and entertainment, too. It became a labor of love for me.”

The book literally starts at the beginning as Sensenbrenner imagines the “first deer-hunting story,” etched into the caves of prehistoric France, before jumping ahead some 300 centuries to the Dark Ages archery outings of the future St. Hubert, patron saint of hunters.

When the events take a quantum leap into modern times, the pages overflow with about three-quarters of a century of family bonding and friendship centered around the great outdoors – from Sensenbrenner’s grandfather down to his own grandchildren.

Speaking of family, the Sensenbrenner name cannot be ignored because it’s one of the most prominent in Wisconsin business and political history.

J.B. Sensenbrenner is the cousin of – not the actual – U.S. Rep. Jim Sensenbrenner, who will retire in January as the longest-serving congressional delegate in state history, representing a suburban Milwaukee district. J.B. is actually the only James/Jim of the two because the politician’s given name is Frank, but he goes by his middle name.

“When I was a student at Marquette, [the politician] would have been campaigning at that time, and I would get calls from people who thought I was him,” Sensenbrenner said. “After about two weeks, to make it fun instead of annoying, I just started pretending to be him.”

This J.B. Sensenbrenner took classes at Sensenbrenner Hall on the Marquette campus, named for his more famous cousin’s great-grandfather, Frank. That Sensenbrenner was the second president of Kimberly-Clark Corporation and the person credited with turning it into a national papermaking and tissue-products powerhouse and one of the largest employers in the Fox Valley. Kimberly-Clark introduced the world to now-familiar consumer brands such as Kleenex, Huggies and Scott paper products.

J.B. Sensenbrenner held summer jobs at Kimberly-Clark but eventually joined a rival – Wisconsin Tissue Mills of Menasha – and rose to the post of national sales manager.

His love of writing began when he took an elective typing class in high school and trained his fingers to the point of being an 80-words-per-minute keyboardist. He’s previously authored three fiction and nonfiction works and published short stories, in addition to writing and editing the Wisconsin Tissue Mills Newsletter.

Sensenbrenner once met Winston Groom, author of the novel Forrest Gump, upon which the Oscar-winning film was based. He picked Groom’s brain at the Tennessee Williams Literary Festival in New Orleans, where Sensenbrenner and his wife spend their winters.

One of the features that jumps out in Love of Hunting is the astonishing amount of you-are-there detail that accompanies the book’s anecdotes: the time of day, whether dusk or dawn; the surrounding terrain and vegetation; the precise, stealthy maneuvers of the whitetails; the pre-hunt breakfast and post-hunt supper menus; and more.

This couldn’t all be from memory, could it? Sensenbrenner assures readers that he hasn’t stretched hazy recollections into notorious fish – er, deer – tales.

“I did keep a log; I do have some files,” he said. “I do write down the [notable] deer-hunting stories each year – years ago on yellow legal pads, and lately in a spiral notebook. And then, as I was writing, I would remember more details as I remembered the stories.”

The chapters move Sensenbrenner chronologically from boyhood to adulthood to senior citizen, and through milestones such as receiving early pointers from his dad, his first hunt, first buck, largest buck and so on. He and the other real-life characters – besides stalking whitetails during Wisconsin’s traditional Thanksgiving-week gun season – stalk rabbits, bear, pheasant and American antelope and mule deer during trips out west. Crossbows replace rifles and shotguns during archery season in October.

Not all of the tales are of the breezy variety. Sensenbrenner describes both successes and failures in the woods, and the lessons learned, along with the inherent dangers of making your way in the wilderness, sometimes in the dark; staving off the elements; and sharing the wild with bears and even a cougar. A particularly harrowing story involves a search for his father, not knowing whether Dad will be found dead or alive.

“That was a difficult story to write,” Sensenbrenner said.

Large bucks remain a goal, and he said he’s a devotee of conservation and habitat improvement on his land that are intended to grow the deer large – which is good for both the herd and the hunt. He partnered with the Door County Land Trust to give free copies of his book in exchange for a new Land Trust membership or donation.

Most of the action rotates between Sensenbrenner’s property near the small northwestern Wisconsin community of Stanley and the Door County home/camp he bought from his father south of Sturgeon Bay, about 700 feet from Lake Michigan and bordering the Clay Banks Nature Preserve that the Door County Land Trust owns.

“I didn’t inherit [the land]; I bought it so that my mother and father could pay cash for a condo in Fort Myers [Florida]. They were 75 at the time,” said Sensenbrenner, who also cross-country skied on the land’s trails until his wife’s knee surgery five years ago. “I gave them a deal where they could stay rent free in the summer as long as they lived. It was a win-win. We just closed it down for the winter.”

Sadly, the inherent bonding of the hunt was curtailed by half this year with the coronavirus pandemic surging, Sensenbrenner said.

“On the other hand, it’s healthy to be in the woods,” he said. “You’re not going to catch it in the woods.”

Visit jbsensen.com to obtain an autographed copy of The Love of Hunting. The book is also available for purchase on Amazon.com or in Sturgeon Bay at the Door County Land Trust office, 23 N. 5th Ave. (free with a new membership or donation) or Howie’s Tackle, 1309 Green Bay Road.