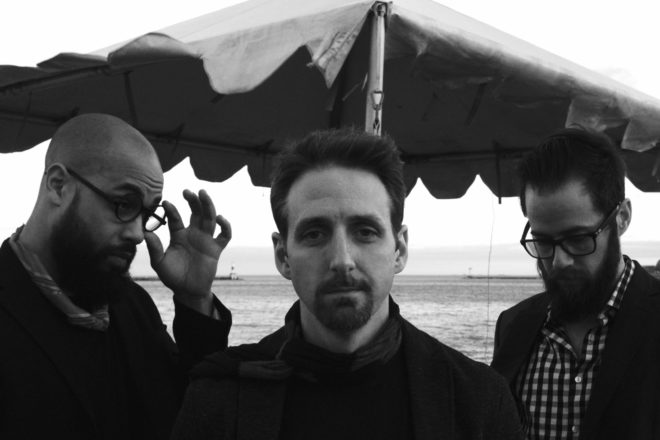 First was the 2013 release West Side Story Suite, with the trio reinterpreting Leonard Bernstein’s orchestral score. In 2016 the band released Pops, which referred to their interpretations of pop tunes, from Burt Bacharach’s “Wives and Lovers” to Frank Black’s (or Black Francis as he called himself as a member of The Pixies) “Waves of Mutilation,” as well as to their regular Sunday-Monday-Tuesday night gig at Pops for Champagne in Chicago.

Finally, last August saw the release of Screen Sounds, which had the trio interpreting movie and TV themes such as Twin Peaks and music from the main title of Akira Kurosawa’s Yojimbo.

Now the trio is about to release a fourth album of original music, called Nothing Here Belongs, and will perform works from the soon-to-be-released CD when the trio makes its first Door County appearance at the Tambourine Lounge in Sturgeon Bay on Friday, Aug. 3.

The trio includes Policastro on bass, Dave Miller on guitar and Mikel Avery on drums.

“This band sort of happened by accident,” Policastro said. “It was born out of a venue in Chicago called Pops for Champagne. Another guitar player, the guy who did the very first album with the us, it was his gig originally. It started as a duo and formed into a trio, and for more than three years now it’s been Dave and Mikel and I. Having three nights a week to play together, experiment and write music is a luxury in any time frame but especially these days.

“When the band came together, it just seemed special to me in terms of the sonic palate and just the way we interacted,” he continued. “I had no reason to step out as a leader, per se. I’ve had a very happy life as a sideman just picking up the phone [he was worked with Jeff Hamilton, Pat and Debby Boone, Phil Woods, Diane Schuur]. Being on the front side of things is a lot more work. But I enjoy this band so much, it’s rewarding just being able to create opportunities for it. A lot of times people, when you have a band that is under a person’s name, OK, bass player leads the group. It’s going to be a bunch of hot bass licks. We don’t approach it that way at all. We’re very democratic in our approach to the music.”

Policastro’s arranging skills are on display in the first three recordings.

“I have a heavy background arranging for large and medium, in addition to small, ensembles,” he said. “It’s approaching the band so differently where you’re changing the roles of the instrument and the voices, seeing what you can get by flipping things around or paring voicings down to their essence, and you can get so many big sounds out of so little. That was something I learned so much from studying people like Gerry Mulligan’s music when he had those pianoless quartets, or even more adventurous composers, well, this wasn’t so much composed as improvised, but Ornette Coleman’s music, or Jimmy Giuffre, these great player-arrangers.”

Policastro mentions that while the trio will feature new music from its upcoming release, they might also throw in a couple favorite cover tunes.

Asked what among the three recordings are his favorite tunes, Policastro does not hesitate in answering with the previously mentioned Yojimbo.

“One of my absolute favorites is Yojimbo,” he said. “I would say because, that film in addition to the spaghetti westerns that are based on it [A Fistful of Dollars and Django], were such an early influence on me, and that music Masaru Sato wrote for that score, it’s just such incredible music. I jokingly say when I introduce the song that it was written for big band with mixed Japanese instrumentation, so for a group to tackle that, a guitar-bass-drum trio, it was ridiculous to take something that big and work it out for a group that small. That’s the thing I’ve enjoyed the most about the arranging aspect of this group – how do you make three people sound like an orchestra?”

While this will be the first public performance of the Joe Policastro Trio in Door County, he had played in two different groups on Washington Island, and his wife, Marie Clarke-Doane, has a deep connection to the county. Her grandfather, the late Robert Clarke, was an ordained Unitarian Universalist minister who helped found the Unitarian Universalist Fellowship of Door County in 1996.

“My wife’s family goes back in Door County for generations. They were some of the real early settlers,” he said. “The tradition of being up there and owning property up there has been persistent through every generation.”

Doors for the Aug. 3 concert open at 7 pm and the show starts at 7:30 pm. Tickets are $15 and advance reservations are strongly recommended. Order tickets at holidaymusicmotel.com.
For more on the Joe Policastro Trio, visit thejptrio.com.