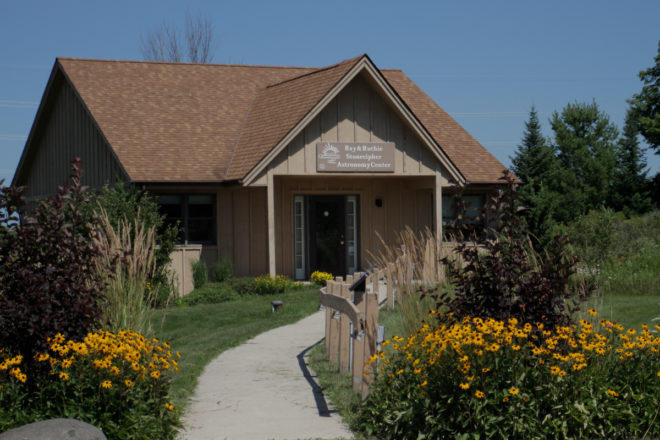 The group holds programming throughout a normal year inside the Ray and Ruthie Stonecipher Astronomy Center. Photo by D.A. Fitzgerald.

Ursa Major, Ursa Minor and Cassiopeia are three constellations that change positions in the sky according to the season, but they’re visible in Door County all year long.

“Those are good starting constellations for people to work from for people who are new to everything,” said Dave Lenius. “Learn where those are” – the northern side of the sky – “and then you can start hopping across the sky and find the other ones.”

That’s the kind of information you’re going to walk away with after even a casual conversation with Lenius, a 10-year member of the Door Peninsula Astronomical Society (DPAS) and now president of the group’s board.

Lenius was speaking during a daytime tour of the DPAS campus. Tucked down Sky Gazer Trail off Utah Street in Sturgeon Bay, the campus was the site of a Perseid meteor shower viewing event that the DPAS hosted this week. It was only the second time this year when the pandemic has allowed the group to hold programming.

Normally, it puts on programs all year long, in keeping with the DPAS mission to “promote the science and public education of astronomy by encouraging observational participation in astronomy, and providing outreach for the observatory.”

The Leif Everson Observatory was constructed and equipped in 1997 with money bequeathed by Ray and Ruthie Stonecipher. That bequest, invested with the Door County Community Foundation, now funds scholarships for students studying math or science, plus equipment upgrades and maintenance.

The pandemic has also grounded the DPAS’s mobile planetarium, a Digitalis inflatable dome that rotates among local schools for astronomy education during a normal school year.

But COVID-19 can’t stop the universe, and the DPAS is still able to livestream celestial images to the public through its website and Facebook page. That was how it worked a couple of weeks ago when the group held its first public event since COVID-19 hit: a tour of the night sky.

Images from the observatory were projected onto a screen set up outside the Ray and Ruthie Stonecipher Astronomy Center. The large grounds enabled the roughly 45 people in attendance to socially distance while viewing live images coming from the 16-inch-diameter Ritchey Chretien telescope inside the observatory. From a state-of-the-art robotic mount, the scope peers at deep-sky objects, such as nebulas and globular clusters, that are millions of light years away.

The beast was part of a major equipment upgrade made a couple years ago. It doesn’t deliver images that are as large and high resolution as, say, the Hubble Space Telescope – the Hubble’s primary mirror is almost eight feet in diameter – but it is able to capture images that inspire plenty of wonder and reflection.

“There are so many different things to see,” Lenius said. “It makes you realize how small we really are in the big scheme of things. When you’re looking at life from hundreds of thousands of light years ago, it’s like looking back in history.”