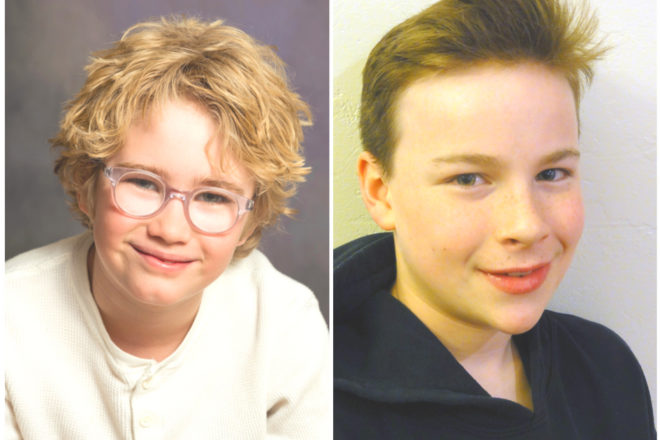 While most young boys in Door County will celebrate the end of the school year by sleeping in on weekday mornings or spending long days just messing around outdoors, two of them are putting in long hours – 35 to 40 a week – in a rehearsal hall.

Ben Martin, 10, just completed fourth grade as a home-schooled student, and Cole Albertson, 13, finished seventh grade at Sevastopol this week. Both have been spending evenings and weekends learning the major role of Charlie in Boxcar, one of two new shows that will have their world premiere this month on the Northern Sky Theater stage in Peninsula State Park. Their parents are Miriam and Russ Martin and Kristin and Jason Albertson.

Neither young man is a stranger to appearing before large audiences. Martin, who is cast as Charlie, appeared last year in Sevastopol’s production of Big Fish and has also been in Christmas shows at school.

Albertson, who is the understudy for the role, was also in Big Fish, playing the same character as Martin, but at a different stage in life. He was also in Twelve Angry Jurors and You’re a Good Man, Charlie Brown at Sevastopol and ‘Twas the Night Before Christmas at Third Avenue Playhouse.

Both boys survived three rounds of auditions, with many hopefuls, to land the summer jobs with Northern Sky. Were the auditions scary? Nah, say these seasoned performers. Well, maybe just a little at first, but the people were so nice that the boys soon felt at ease. “I felt very welcomed,” Albertson said. “All my nervousness went away, and I just went with the flow.”

The hard part might have been waiting several weeks to find out if they got the jobs. Martin, however, said, “I nearly forgot about it. It’s pretty remarkable,” he continued, “that I’ve been in one play before and now I’m in a professional show. I’m really glad to have the opportunity.”

And is it nice to get a regular paycheck? That question produced a big grin. “It’s real work,” Martin said, “but not many kids my age make so much money.” What does he plan to do with all that money? “Save most of it,” he said, “and maybe buy a Nerf gun or two.”

“I’m just really happy I got the part,” Albertson said. He’s had a number of on-stage experiences, but said, “It’s really amazing to hear the voices of the professional actors.”

Jeff Herbst, artistic director for the theater, said young actors were auditioned in Minneapolis, Milwaukee and locally, starting two years ago. Molly Rhode, associate artistic director, reached out to Lizz Thomas, who directs Gibraltar High School’s musicals, for recommendations. James Valcq, who composed the music for Boxcar, and Jon Hegge, who’s directing the show (with book and lyrics by his wife, Laurie Flanigan-Hegge) also helped with the auditions.

“The quality of unselfconsciousness is one of the hardest to find in a child,” Herbst said. “That made finding Ben a real boon. Of course, that quality has to be augmented by a natural ability to get to the truth of the storytelling and then give it the boost it needs to be theatrical.”

“Both Ben and Cole have stepped up and are growing throughout the rehearsal process, keeping pace with the adults around them. Ben looks out for us – reminding us, at times, that we forgot a prop or where to move in a scene. The connection to the community is something we always want to achieve at Northern Sky.”

Boxcar, a tender story about an unlikely friendship between a boy and two hobos in the 1930s, will be on stage in Peninsula State Park, beginning June 13. Shows start at 8:30 pm Mondays and 8 pm Wednesdays and Fridays. For July 4, the performance begins at 6 pm. For more information visit northernskytheater.com.