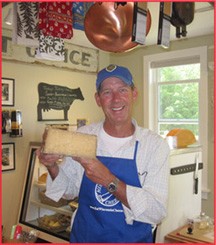 After a winter that does not seem to want to go away it is time to be thinking about the warm days coming our way. Janice and I spent some quality time this winter visiting with a number of cheesemakers here in the state to see what new cheeses they are creating. The beauty of what we do is that we are always surprised to discover new cheeses that we can share with our customers this spring and summer.

In March the U.S. Cheese Championship took place in Green Bay. This bi-annual event showcases the finest American cheeses and continues to grow with cheesemakers in the U.S. This year there were 1,702 entries from 30 states. The competition is judged by an expert group of 38 cheese judges who come from all over the country. Every cheesemaker that enters this competition hopes that they win a ribbon in their class.

This year the cheese that won top honor, Grand Champion, was a raw milk aged Gouda from Marieke Penterman of Holland’s Family Cheese in Thorp, Wisconsin. Her cheeses have won numerous awards before, but never an award as big as this. Complete results can be found at http://www.uschampioncheese.org/contest/results/.

Penterman, a native of Holland, has only been making cheese for six years. She and her husband Rolf, along with their five young children, have a 500+ head dairy farm that produces the milk to create the very special cheese produced on site. When a cheese is made on the same farm where the milk is produced, it is called a “farmstead cheese.” Janice and I visited the Penterman’s farm years ago, and feel very lucky to call her a friend. As a matter of fact, I was with Marieke hours before the judging was complete and told her that I thought she might win the top prize. Of course she wasn’t sure that she wanted to hear that, thinking that this might jinx her chances. She is a very talented cheesemaker and has worked extremely hard perfecting her art.

In an industry dominated by multi-generational cheesemakers, mostly male, it is very good to see a woman, especially from Wisconsin, be recognized for her cheeses. In the 2011 U.S Championship another woman from Wisconsin won the top honor. Katie Hedrich from LaClare Farms won Best of Show for her raw goat milk cheese, Evalon. Women cheesemakers make up a very small percentage of the licensed cheesemakers in Wisconsin. Of the 1,200 licensed makers in the state, only 60 are women.

On June 15 Penterman,, as well as award winning cheesemaker, Chris Roelli, will be here in Door County. They will both be appearing at the second annual Door County Beer Festival to share their stories, and to have their cheese paired with craft beer. More information on this year’s event can be found at http://www.doorcountybeer.com.

That evening both Roelli and Penterman, will be making a guest appearance at The Savory Spoon Cooking School in Ellison Bay. Chef Janice, along with cheese geek Sara Hill of the Wisconsin Milk Marketing Board, will be creating an evening of fun and great food. More information on this event can be found at http://www.savoryspoon.com

As always, if you have questions or interesting stories about the world of cheese, send me an email at [email protected].

Michael C. Thomas is co-owner of Schoolhouse Artisan Cheese with his wife Janice. With locations in Ellison Bay and Egg Harbor, they aim to bring the best of Wisconsin artisan cheeses to Door County, and with “The Cheese Insider” Michael hopes to bring all things cheese to readers of the Pulse.