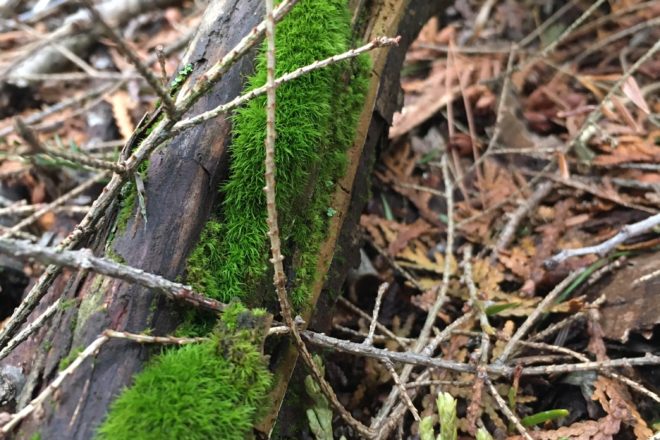 A lot of fallen trees were covered in bright-green, fluffy moss. Photo by Celeste Benzschawel.

Spending time outside is more important than ever. Getting your lungs full of fresh air and your mind focused on different sights and thoughts are ways to stay sane after being confined to your home all day. Monday evening was no exception.

At 5 pm, the end of my remote work day, I decided to venture out of the house to Ephraim to visit the wetland preserve.

During my first winter in Door County, I’ve been making an effort to visit as many preserves and land trusts as possible – I don’t want to miss a thing. That’s why, whenever I’ve driven through Ephraim heading south, I’ve known I would have to stop someday at that small turnoff on Highway 42 that I happened to see out of the corner of my eye. Monday was that day.

Before leaving the house, I put on long socks, hiking boots and a pair of earmuffs, and I grabbed a pair of headphones. I hadn’t listened to music all day and thought it might elevate my mood.

But as soon as I got to the preserve, I knew I wouldn’t need the headphones. The wind whispered through the trees, and that seemed like music enough.

I looked at the posted map to see what kind of trail I’d be working with, but I admit I couldn’t understand it. There were three marked trails, but the heads to them weren’t very clear, and it didn’t help that I didn’t really know where I was in the first place.

So, in my usual fashion, I disregarded the map and picked an entrance. Jim Lundstrom wrote about this hike in 2017, and I couldn’t have said it better: “This village-owned preserve takes you immediately from the hubbub of the highway to a peaceful place of contemplation and reverie.”

As soon as I stepped onto the trail, it felt like I was in another part of the county. The ground was covered by a thick layer of pine needles and small sticks, so I couldn’t hear my own footsteps. The path wove through areas of dense trees, grassy openings and deep puddles.

The lack of audible footsteps made it easier for me to hear what was going on around me, and I stopped every few steps to listen. I kept hearing a soft squeaking and thought it might be a small animal, but then I realized it was the tops of the trees rubbing against each other in the wind.

Though it ended up being only the trees and not a animal, I was certain I would come upon a deer. I have to say, I’ve never gone on a hike when I came across more deer feces than this one. It seemed as though there were fresh piles every other step.

I had to look down at my feet a lot, and not just because of the feces. The trail kept getting hidden under freshly fallen trees, ice and puddles. I even got caught in a thorn bush when I wasn’t paying attention. I suppose they don’t call it a wetland for nothing, and the winter thaw is on.

I lost the trail a few times because of these things, but luckily, I was able to pick it up again by spotting the posted educational signs. The preserve runs parallel to private land, but it’s marked, so I knew where the boundaries were.

As I got deeper into the hike, I realized I could see something in the middle of the trees just beyond the trail on private land. There was a bright construction ladder, a couple of bike tires and some other items I couldn’t make out in the shadows.

I get creeped out easily, especially when I’m alone, so I thought that if I was seeing random items scattered in the woods and the trail kept getting covered, I’d better turn around while I still had the ability.

I let the wind guide me back down the trail, and I continued to stop to listen for animals, read the legible signs, gaze up at the different trees and admire the bright-green moss and decay surrounding me.

My hike was short and sweet, and a welcome (and needed) escape from my desk at home. Though I had been silent for most of the day, the silence I experienced during the hike was of a different sort – one that I could listen to.