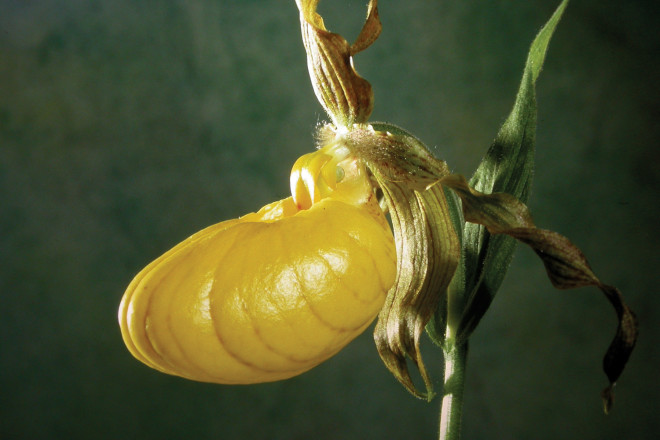 The great majority of Door County residents will be surprised to learn that the strikingly magnificent Large Yellow Lady’s-slipper Orchid is Door County’s official flower, and in the early 1980s the Door County Board of Supervisors voted these plants and their habitats to be protected by law. 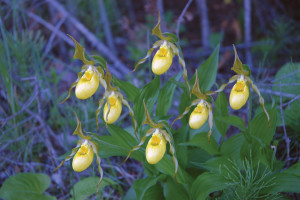 Idealistically, I thought when the law was approved that a roadside decorated with hundreds of these striking wild orchids would be protected from the “wideners” and that a 40-acre woods, where thousands of these awesome plants existed, would forever be safe from the developers. Not so!

Can you imagine an owner of acreage overlooking the water saying:  “We must wait an entire year before developing this property. A complete plant survey will be made to find out what grows here. Only then, knowing that no lady’s-slipper orchids or other endangered or threatened plants exist here, will the bulldozers be allowed to move in.”

I can easily imagine the loud reply:  “When will that minority of out-of-touch environmentalists ever learn that they cannot stand in the way of progress?” Oh how I wish the lady’s-slipper orchids had a voice, better yet a vote. 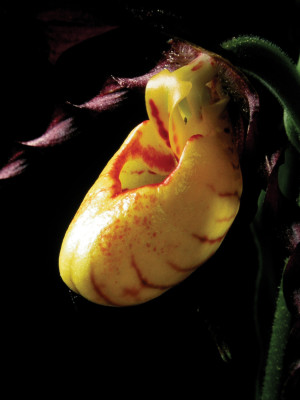 It is quite amazing to look down at a dazzling colony of these yellow orchids surviving beautifully at 585 feet above sea level here (average Lake Michigan level is about 580 feet) knowing that a very comparable species has been found in the Himalaya Mountains at an elevation of over 12,000 feet. This is also the only lady’s-slipper orchid native to Europe.

Around 30 years ago Joyce Bender, a brilliant botany graduate student from the University of Akron in Ohio, came to voluntarily work under my supervision for a few weeks at The Ridges Sanctuary. Specializing in the study of wild orchids, her main interest at the time was learning more about the pollination of the large yellow lady’s-slippers, although she was also highly interested in other native orchids, their growth and habitats.

I’ll never forget the look on her face when we arrived at one of the finest sites for these plants in western Door County. There she stood, mesmerized, slowly turning in a circle, estimating from one point well over a thousand “golden slippers.” Mind-boggling is the closest I can come to describing that memorable and precious moment. Today, nearly all of those large yellow lady’s-slippers have disappeared, and I have no idea what happened. 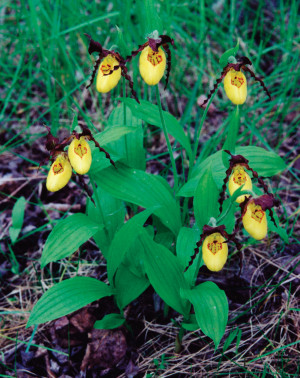 There are about 50 species of lady’s-slipper orchids in the world growing from the tropics to the northern boreal regions. Eleven species, or possibly 12, depending on the whims of the plant taxonomists, grow in the continental United States (there are no lady’s-slipper orchids native to Hawaii, Florida or Nevada). All require plentiful moisture and cool temperatures. Wisconsin has six species while Door County lays claim to five species, three of which are of special concern or threatened in the state, and two are fairly common and not in danger of disappearing soon.

The large “yellow,” Cypripedium parviflorum, var. pubescens, is by far the most abundant. The two lateral petals, appearing like twisted corkscrews or pigtails, are usually greenish-yellow and often quite heavily veined with maroon to dark brown. The slipper or pouch has no fragrance. Interestingly, this species is unusually variable in height, ranging from half a foot to a foot and a half, depending on where they are growing. 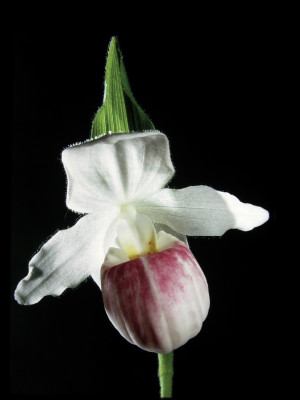 mahogany-brown; the flower is always small and dainty, and the slipper has a wonderful vanilla-like fragrance. This species is of special concern in Wisconsin. In all the years I worked at The Ridges Sanctuary I saw very few growing there. Virtually all are the large yellow.

The tiny Ram’s-head Lady’s-slipper, Cypripedium arietinum, is the extremely rare species in the county. Elsewhere in the state it’s a threatened species that needs careful monitoring and the strictest habitat management. Fortunately, a very good research project is underway at The Ridges aimed at understanding the growth habits and requirements along with the reproduction success of this exquisite and scarce species. This wildflower, along with the awesome Showy Lady’s-slipper, have both been found growing naturally in China.

The second most common lady’s-slipper, but never an abundant species in the county, is the Pink Moccasin-flower or Pink Lady’s-slipper Orchid, Cypripedium acaule. It is the provincial flower of Prince Edward Island in Canada. Provide this plant with perfect growing conditions and it will thrive. My wife Charlotte and I hiked on Stockton Island several years ago, a part of the outstanding Apostle Islands, and came upon a colony of at least 500 Pink Moccasin-flowers existing within the area of an average living room, about 20 feet by 20 feet. 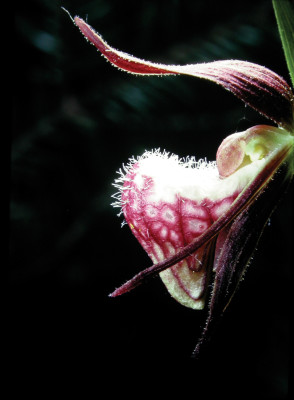 The colorful, tall and robust “queen of them all” is the Showy Lady’s-slipper, Cypripedium reginae, very fittingly referring to a queen. When I began working at The Ridges Sanctuary in the summer of 1964 this orchid was very abundant. The swale between Wintergreen and Deerlick Ridges, for example, had a few hundred growing there, but the largest most spectacular colony of them, an estimated 400 to 500 plants, located between Ridges Road and the shore, grew several hundred yards east of The Ridges parking lot and swimming beach. Eventually that property was mostly cleared in order for a home to be built; the wet swale completely filled in and the orchids were buried.

While these orchids of special concern in Wisconsin were victims of development in this case, the plants are also strongly relished by the White-tailed Deer. These deer wiped out the many smaller populations of “showies” within the sanctuary through the years. What had been chosen by the charter members of The Ridges in 1937 as their official wildflower, emblem and seal, the Showy Lady’s-slipper has been virtually wiped out by development and the extremely difficult-to-manage deer.

Hopefully the day won’t arrive when people will have to admire photographs of the highly coveted lady’s-slippers that used to grow in our county.